Ark of the Covenant – Bible Archaeology

There are lots of pictures of the Ark of the Covenant, but no-one really knows what it looked like. The pictures you see in books are educated guesses, based on the Bible description (see bottom of page).

How does the Bible describe the Ark?

… a large chest or ornate box of acacia wood 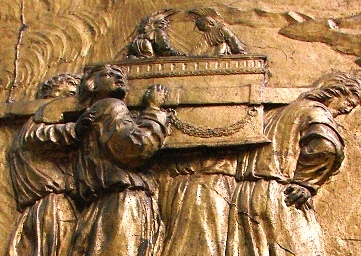 … covered with pure gold, inside and out
… four gold rings fastened to its four feet
… gold-covered poles of acacia wood
… inserted into rings on each side
… a cover of pure gold
… with two cherubim (winged angels) of hammered gold, one at each end
… the cherubim facing each other, with their wings spread upward.

Was the Ark unique?

People tend to think of the Temple in Jerusalem and the Ark as unique, different from anything ever built before. That was not so. Then, as now, sacred objects and buildings were influenced by what was happening in nearby countries and states.

Here’s an example: every Christian church is different – designed by a different architect, made for different congregations and beliefs. But they are all similar too, or have features in common.

So it was in the ancient world – and the Temple of Jerusalem was no exception. The people who built it borrowed ideas and designs from surrounding cultures. You can see the Bible Text describing the Ark at Exodus 25:10-21, at the end of this page. 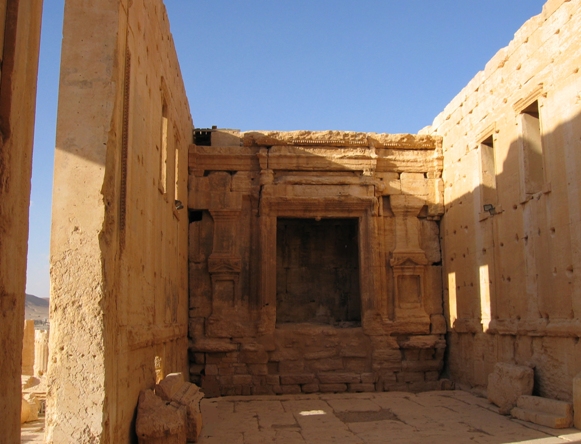 Remains of the Great Temple at Palmyra. Though this particular temple was looted hundreds of years ago, its most sacred objects would have been kept in the now-open niche (above) at the rear of the temple cella. The same was done with the Ark of the Covenant in the Temple of Jerusalem. 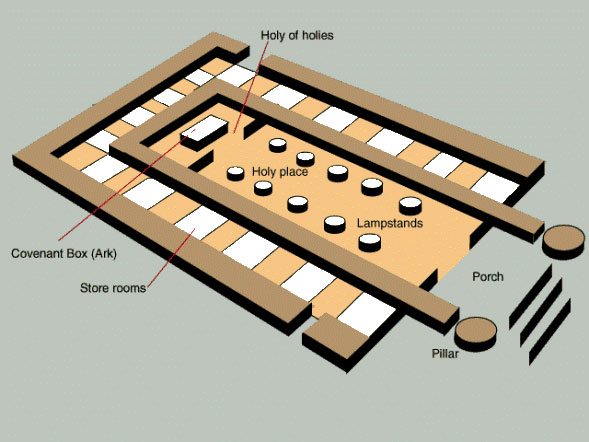 Floor plan of the Temple of Jerusalem.
The Ark was kept in the innermost part of the sanctuary

Where was the Ark kept?

The Ark was kept at different places in different times of history: 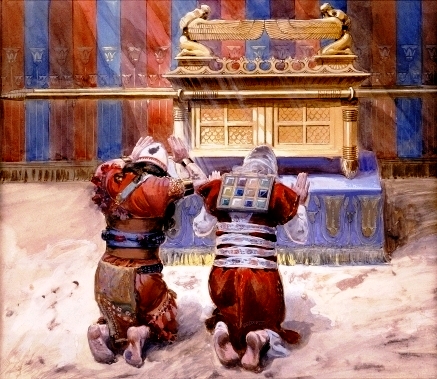 An artist’s recreation of the Ark: James Tissot, ‘Moses and Joshua in the Tabernacle’

What was the Ark of the Covenant for?

The Ark was a central sacred object for the Jewish tribes. It was the focus of their identity. It held the twelve tribes together. It gave them purpose, power, pride in who they were. It said to the: you have something no other group of people has: God’s presence among you. You are unique.

At its core were the two stone tablets of the Law – given directly from God to Moses. Other countries had stone steles with laws written on them. But Israel’s laws, they believed, came not from a king but from God Himself.

The Ark had its place in the Holy of Holies in the centre of the tabernacle, and was removed only when the whole shrine was dismantled to be moved somewhere else.

Archaeology shows many parallels to the placing of the tablets of the Law in the ‘holy place’ of the nation. Among ancient peoples, legal bonds and documents were often placed beneath statues of the gods who were witnesses to the agreements. 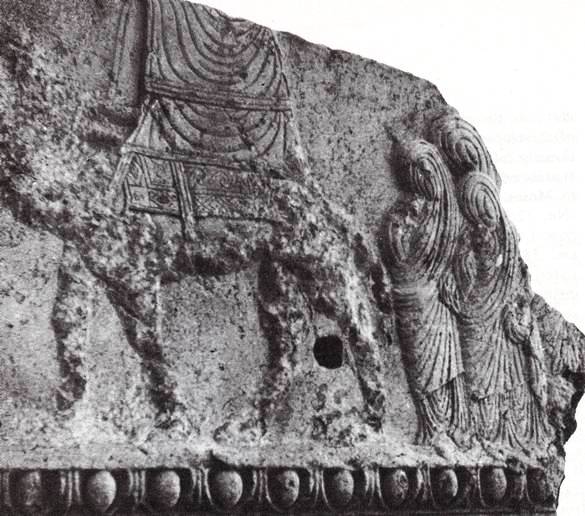 An ancient stone carving from Palmyra, showing a portable Tabernacle.

The Ark could be transported to where it was needed most. It stood

After the Temple had been built, the Ark was placed in the innermost sanctum (I Kings 8:3-4, 6-8) and lay there until it was destroyed along with the Temple in 587-586 BC.

Its memory remained, but Josephus (Wars 5, 5, 5) records that in Herod’s Temple, there was nothing in the Holy of Holies.

Was there a link to Tutankhamun’s Tomb?

When Howard Carter opened the inner chamber of Tutankhamun’s Tomb, he found a statue of Anubis, Egyptian god of the dead. 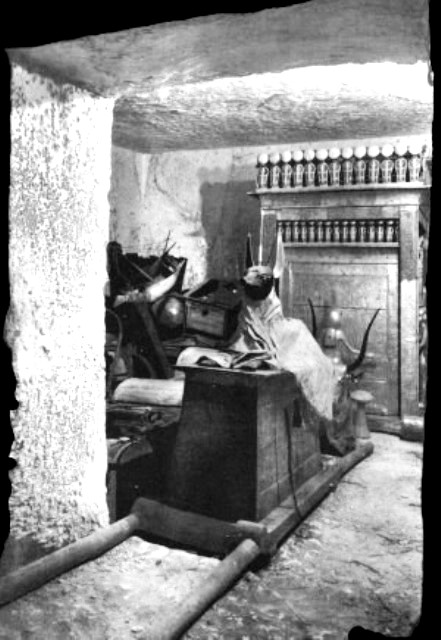 Shrine of Anubis from the Egyptian tomb of Tutankhamun, with poles at either side, used for carrying the shrine from place to place

The jackel-like figure of Anubis was sitting on top of a large box covered with pure gold. This box had poles inserted into rings on its side, so that it could be easily carried.

The Bible tells us that the Ark was originally transported from shrine to shrine, before David’s son Solomon built a permanent home for it in the Temple in Jerusalem.

The poles of acacia, specified in the Bible, were used in much the same way as the poles on the Shrine of Anubis – to lift and carry.

The Shrine of Anubis was clearly meant to be portable, as the Ark of the Covenant was

The outer casings around Tutankhamun’s coffin were covered with hammered gold leaf – as the Ark was. At each corner, and on the doors, were winged female figures (cherubim?) who stretched their wings out and over the surface of the casings, as if to protect its contents.

Each item described in the Bible

It would seem that the Egyptian design was copied and adapted by the Hebrew tribes of the time when they created their own sacred objects. 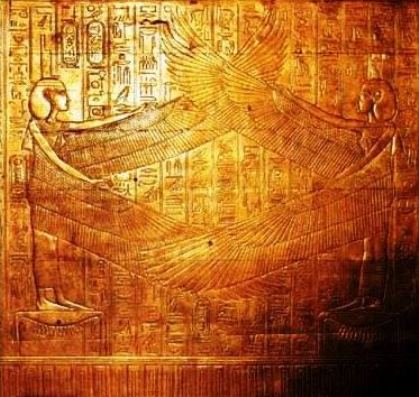 Creatures on the shrine doors in the Egyptian pharoah Tutankhamun’s tomb. They strongly resemble the Bible’s description of the cherubim. 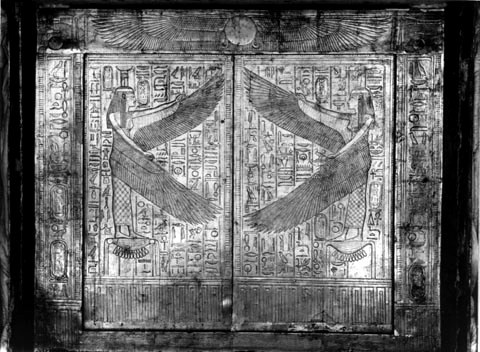 The Bible specifies ‘two cherubim of hammered gold with wings spread upward, facing each other at the ends of the cover’

What happened to the Ark?

The Ark of the Covenant disappeared from the Jewish Temple somewhere before or during the Babylonian invasion of Jerusalem in 586 BC. It may or may not have survived. There has been much speculation about it.

No new Ark was made for the post-Exilic Holy of Holies (Jeremiah 3:16). Its memory remained, but Josephus (Wars 5, 5, 5) records that in Herod’s Temple, there was nothing in the Holy of Holies.

Bible text: the Ark in the Holy of Holies

Ark of the Covenant questions

What’s this page about?

What are three important bits of information?

Why are they important?

Raiders of the Lost Ark – Hollywood’s idea of the Ark!