Judas – worst of them all? 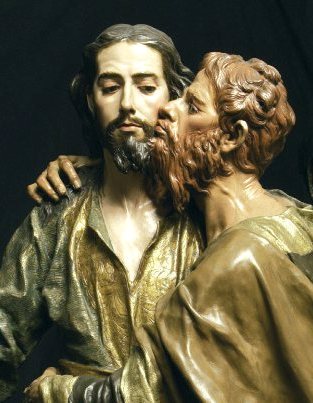 The Kiss of Judas, Spanish carving

Was Judas the worst of the gospel villains? How could that be? He was one of the inner circle of Jesus’ disciples. With the others, he followed Jesus as he travelled around the country, teaching and preaching.

Judas was in charge of the finances of the group: he kept account of the money and worked out how to spend it to best advantage. Something worth noting is that the men and women who traveled with Jesus trusted Judas with the money.

Then, in that fateful Passover week, Judas did the unthinkable. He colluded with the authorities so that they could arrest Jesus – and what’s more, did it for money.

But is it that simple? Did he do it just for the money? Surely not. Someone trusted by everyone and exposed to Jesus’ magnetism and ideals couldn’t have done what Judas did just for money.

So why did he do it? Was there some connection between the event immediately beforehand, when Jesus attacked the money-changers in the Temple? Was there some dreadful quarrel about the way that money ought to be used? 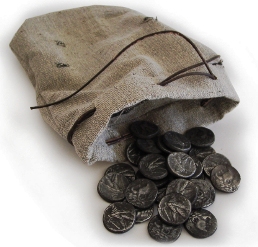 And did Judas act with Jesus’ consent? The gospels and Acts are frustratingly short on motive, and even worse on factual detail. They don’t even agree on how Judas died – was it by hanging, as Matthew says? Or in a horrible accident that saw him crushed and disemboweled, as Acts describes? Judas’ story raises more questions than it answers.
(Matthew 10:4; 26:14ff; 27:3ff; John 12:4-6; 13:21-30; Acts 1:18-19)

‘Then one of the twelve, who was called Judas Iscariot, went to the chief priests and said “What will you give me if I betray him to you?”‘

Pilate, one of the worst villains in the gospels, was the Roman prefect of Judea. He had been appointed by the emperor Tiberius in 26AD. He lived in an official residence at the port of Caesarea, but went to Jerusalem at festival time – that is why he was there at the Passover festival when Jesus was arrested, put on trial, and crucified. 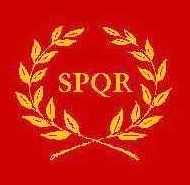 It was a difficult, combustible time, and Pilate was not a diplomat. The Roman letter-writer Philo describes him as ‘a man of inflexible disposition, harsh and obdurate’.

Pilate’s behavior towards the Jewish population was if anything designed to encourage unrest and resentment. Jewish law forbad images of any kind, but when Pilate entered Jerusalem for the first time, he ordered the soldiers to carry their military standards, which bore the emperor’s image. There was an outcry against this tactless action, and Pilate eventually had to back down and remove the images from Jerusalem.

The gospels present him in a more favorable light, suggesting that he knew that Jesus was innocent but was forced to condemn him. This may be true, but it is also a fact that the gospel writers were bending over backward, as they told the story, to show the Romans in a good light. At the time they were writing, it was politically expedient to do so. 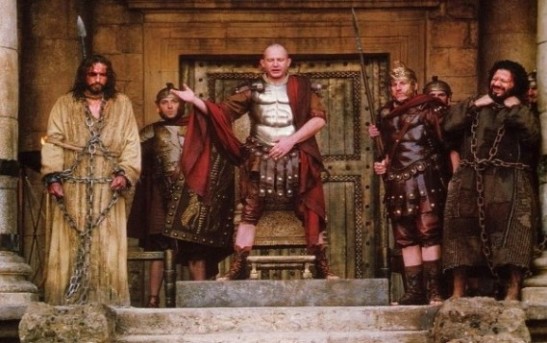 Pontius Pilate with Jesus, ‘Passion of the Christ’

Pilate’s brutal dispersion of a crowd of Samaritan pilgrims at Mount Gerizim eventually brought about his downfall. The Samaritan leaders protested to his supervisor, Vitellius, and Pilate had to return to Rome to answer for his conduct. The emperor Caligula banished Pilate to Vienne in Gaul, where he died in 41AD. 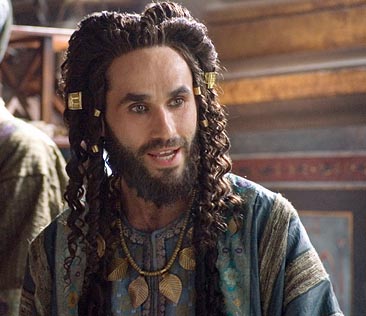 King Herod the Great, as portrayed
in the TV series ‘Rome’

If you were a member of the Judean royal family, you would certainly have thought that Herod the Great was one of the worst gospel villains. The man was full of contradictions. He was shrewd, clever, far-sighted, but also cruel, paranoid, and barbaric. He murdered his beautiful royal wife, the princess  Mariamme, and the two handsome sons he had with her, strangling them with a silken cord.

On the other hand, he also kept 1st century Palestine out of trouble with the Romans, something very few people could have done, and built cities, palaces and fortress whose ruins still impress.

Did he order the slaughter of the innocents in Bethlehem, at the time of Jesus’ birth, as Matthew narrates? There is no other evidence for this event, but it would have been quite in character for Herod to do something like this. He saw plots against him everywhere, and given the number of people he put to death there were probably a fair few plots for him to fear. Certainly he was hated by a great many people.

His greatest achievement – apart from switching sides at the right moment from Mark Antony to Augustus – was the rebuilding of the Temple in Jerusalem. This mammoth task began in 19BC and took many decades to complete – Jesus, Mary and Joseph saw a work in progress when they visited the Temple, and it is even possible that Joseph may have worked on this or one of Herod’s other mammoth building projects.

Reconstruction of the Temple rebuilt by King Herod the Great;
the Temple was still being rebuilt at the time of Christ

As Herod lay dying in terrible agony, he ordered that as soon his soldiers were to execute several hundred popular officials, so that there would be a public lamentation throughout the city at the moment of his death. Fortunately, his sister countermanded the order – but the incident gives some idea of just how his crazed mind worked.

‘When Herod saw that he had been tricked by the wise men, he was infuriated, and he sent and killed all the children in and around Bethlehem who were two years old or under…..’ (Matthew 2:16) 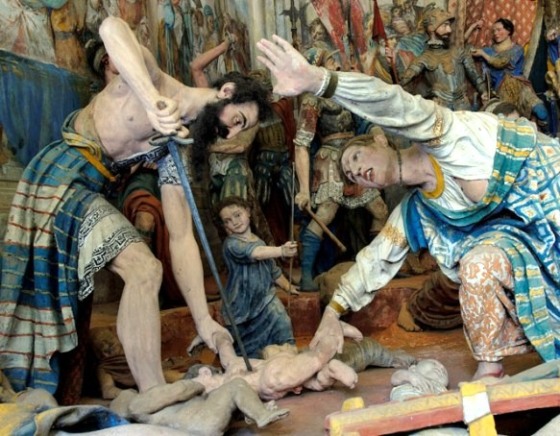 ‘Slaughter of the Innocents’, from the extraordinary artworks
at Sacro Monte of Varallo

Herod Antipas ruled over Galilee for over 40 years, during the life of Jesus of Nazareth. He is famous as the ruler who killed John the Baptist, and who slid out of saving Jesus when he was on trial in Jerusalem. 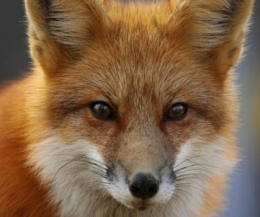 Herod Antipas was one of the few sons of Herod the Great who survived his father’s paranoia, and he did this mainly because he was lazy or clever, or possibly both – Jesus, an excellent judge of character, called him ‘that fox’. Jesus may have been referring to Herod’s cunning, but foxes were hated because they were needlessly destructive, killing more than they needed for food.

When his father died, the Romans made Antipas ruler of Galilee and the neighboring state of Perea, where the Baptist lived and preached.

Antipas’ first wife was the daughter of King Aretas IV of Nabatea. This marriage lasted for a number of years, but then Antipas fell passionately in love with a very unsuitable woman – the daughter of his dead half-brother Aristobulos who had once been married to his half-brother Herod Philip. Marriage to the widow of your brother was unlawful according to Jewish practice, and Herod and Herodias were roundly condemned when they married – notably by John the Baptist. 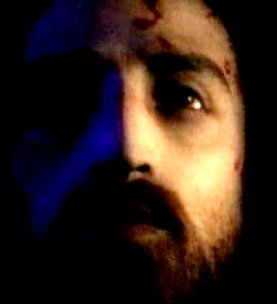 In the volatile political situation of the time, John’s criticism was seen as potentially rebellious, and Herod and his wife and step-daughter Salome engineered John’s execution. They probably saw it as a relatively trivial matter.

A few years later, when Antipas was in Jerusalem for Passover, a trouble-maker called Jesus of Nazareth was sent to Antipas for assessment – since the man was from Galilee, he fell under Antipas’ jurisdiction. When Jesus refused to answer his questions, Antipas mocked him and then returned him to Pilate. This was typical of his reluctance to make any decision that could be potentially dangerous to himself. 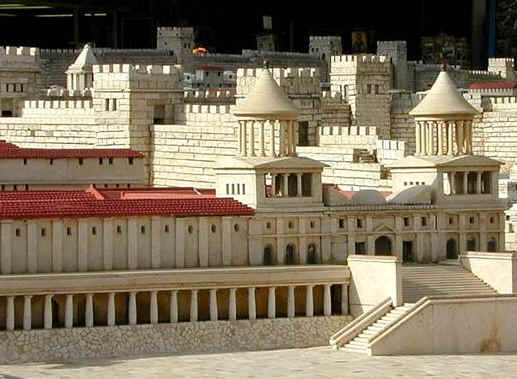 Reconstruction of the royal Palace.
Herod Antipas lived here when he was in Jerusalem.

Antipas and Herodias were miffed when the Romans made her brother Herod Agrippa a king – Herod was a ruler but not formally called ‘king’. Antipas applied to the current Roman emperor, Caligula, to be named a king, but Caligula responded by stripping Antipas of everything he owned, exiling him to Gaul and giving all his possessions to Herod Agrippa instead. To her credit, Herodias volunteered to go with her husband Antipas into exile.

‘But when Herod’s birthday came, the daughter of Herodias danced before the company and she pleased Herod so much that he promised on oath to grant her whatever she might ask. (Matthew 14:6-7)

Villains in the Old Testament
Pharaoh of Egypt, Goliath, the Serpent in the Garden, Nebuchadnezzar, the Levite and his concubine, and one woman: Jezebel

Young People in the Bible: Salome
Innocent or devious?

Why was Goliath so strong?Malcolm Gladwell explains

Bible People: Joseph
A quiet man in a remote village, an unexpected life

Meditation for Parents
Looking for a prayer to help you through the day?