Who was Rebecca, Bible woman?

…and Isaac loved her 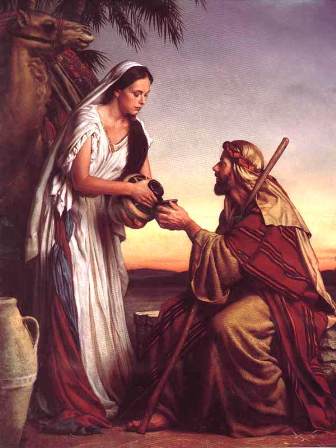 Rebekah at the Well,
painting by Michael Deas 1995

She was a young woman who came from a well-to-do family in upper Mesopotamia. She was a relative of Abraham, and destined to become the wife of Isaac, son of Sarah.

Rebecca was beautiful, shrewd, energetic, physically robust and strong-willed. We meet her at the well of Aram-naharaim, where she showed that she was willing to work, and confident enough to speak to the strangers who had been sent to find a wife for Isaac.

‘Before he had finished speaking, there was Rebecca, coming out with her water jar on her shoulder. The girl was very fair to look upon, a young girl, whom no man had known. She went down to the spring, filled her jar, and came up.’ Read Genesis 24:1-27.

Rebecca impressed Abraham’s men who had stopped to rest at the well. They offered her valuable gifts, including a gold nose-ring and two gold bracelets, which she accepted.

What are the gifts for Rebecca? 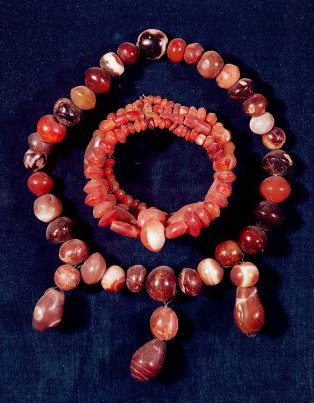 There are two types of marriage gifts:

Rebecca led the men to her home, to introduce them to her family. Her brother Laban seemed to be the head of the house, inviting them to stay. This suggests that their father Bethuel was alive, but was incapable of acting as head of the household.

A proposal of marriage, on behalf of Isaac, was made. It was accepted by Rebecca and by her family.

‘And they called Rebecca and said to her “Will you go with this man?” She said “I will”. So they sent away their sister Rebecca and her nurse along with Abraham’s servant and his man, and they blessed Rebecca.’

The description of Rebecca’s betrothal and marriage gives a fair picture of marriage practices among the early Hebrew people:

Rebecca had more say in whom she married than did Isaac, her future husband. Genesis 24:8 suggests that the marriage would not have gone ahead without her consent, but Isaac is expected to marry the woman brought home to him by his father’s agents.

As she faced the journey to her new home, she seemed sure of her own judgment, and ready for this daunting new experience. Her journey took her from upper Mesopotamia, in what is now northeastern Syria, to Beer-lahai-roi in the Negev, a distance of about eight or nine hundred kilometers.

When Rebecca and Isaac met, it seems to have been love at first sight. He took her to the tent that had once belonged to his mother Sarah – this tent was to be Rebecca’s now.

The phrase ‘Isaac loved her’ is used, something most unusual for the biblical text. Rebecca comforted Isaac after his mother’s death; the deep bond that Isaac had with Sarah was replaced by his love for Rebecca.

This Bible story has an ‘and they lived happy ever after’ feel about it.

The Birth and Youth of Esau and Jacob 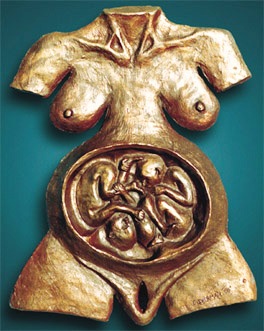 ‘Jacob & Esau Wrestling in the Womb’ by Charles Sherman

But the story does not have a happy ending – not yet, anyway.

Rebecca did not conceive for quite some years, and this was considered both a personal misfortune and a sign that she was not favored by God.

But eventually she became pregnant. Even then it was not plain sailing. She had a difficult pregnancy, since the two babies inside her were constantly moving, so that she had no peace.

Even before they were born, they were struggling with each other. Like many women before and since, she wondered what she had got herself into.

So she ‘went to enquire of the Lord’. Rebecca was the first woman we hear of who sought God out and asked him for an explanation of her condition…

The method she used to speak with God is not explained, but a common practice in the ancient world was to consult a prophet or oracle. Rebecca may have followed this practice or, as in Numbers 12:6, the message may have come to her in a dream.

God told her that

‘Two nations are in your womb, and two peoples born of you shall be divided; the one shall be stronger than the other, the elder shall serve the younger.’

‘Babies did not wear diapers; they ‘went’ in small clay pots the mother carried with her. A mother learnt to read the signs when her baby was about to excrete, and since it never left its mother’s side, this was easy.’ Childbirth in ancient times

‘When her time to give birth was at hand, there were twins in her womb. The first came out red, all his body like a hairy mantle, so they named him Esau. Afterward his brother came out, with his hand gripping Esau’s heel, so he was named Jacob.’

From the start, Esau was a ‘man’s man’, good at hunting and outdoors activities, confident, careless, unconcerned. He had a good relationship with his father.

He married two Hittite (non-Hebrew) women who did not get on well with Rebecca and Isaac (see Genesis 26:34-35). 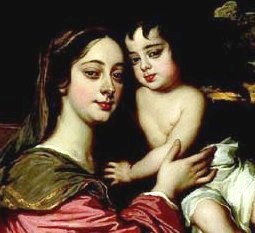 Jacob was quiet, more thoughtful, more interested in learning. He did not particularly enjoy outdoors activities. He depended on his intelligence and his wits rather than on brute strength.

There’s a subtext here: the clash between these two young men echoes the continuing struggle between the nomadic hunter and the settled agriculturalist, as related in the story of Cain and Abel – see Eve: her world.

Rebecca and the Blessing of Isaac

One day, Esau carelessly gave up his birthright, half of his inheritance, to his younger twin Jacob.

What did this mean? On the death of the father, property was divided in equal shares between the sons, but the eldest son got a double portion. This was called the ‘birthright’ of the eldest. Thus in a family of two sons, the elder would get two-thirds, the younger would get one-third.

Daughters had already received their inheritance in the form of a dowry.

In the story of the stew, Esau gave up his right to a double portion and transferred this right to Jacob. 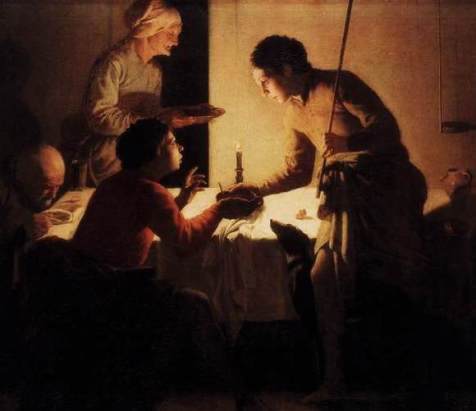 In Genesis 26 there is a story involving Rebecca and King Abimelech in Gerar. It is similar to one involving Sarah, in Genesis 20. The episode is really about water rights in the area, essential to a nomadic people.

Why is this story important? Because in the section involving Rebecca (26:1-11), all Rebecca’s actions suggest that she was active, not passive, a planner and doer, not a victim.

So the episode with Abimelech is likely to have resulted from co-operation between her and Isaac. Indeed, judging from other events in her life, the plan may have originated with her. 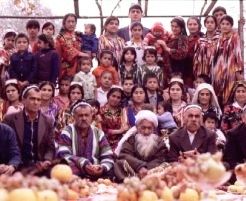 ‘Within an ancient clan there was a central family, who gave the clan its name. The matriarch was the woman within the central family with the highest social standing, and she was owed the greatest respect. She was responsible for the well-being of all the members of the clan.’
Who was the boss?

After this, we learn of Judith and Basemath, Esau’s Hittite wives who made life bitter for Rebecca and Isaac (Genesis 26:34-35).

The resentment of Judith and Basemath was understandable. In their eyes, their husband should have been in line to inherit a double portion of Jacob’s possessions, which he would not now receive. They overlooked the fact that it was their husband’s fault that this was so, and took out their anger on their in-laws.

But the story suggests that the real reason for this grubby behavior lay in their origins. They were foreigners, with foreign gods and customs.

To the writers of the biblical text, this meant they could never be suitable wives for Hebrew men. (But this idea is contradicted later, in the story of Ruth.)

Who will get the birth-right?

When Isaac was very old, he realized that it was nearly time for him to die. This meant that he should give his formal Blessing to the son he wanted to succeed him.

In ancient Hebrew tribes, the Blessing meant the handing over of legal power to a successor – a more valuable gift than any amount of property. The person who received the Blessing had authority over the whole clan, even over people who were older than himself.

If Jacob had the Blessing, he would govern the tribe after Isaac’s death.

But Esau was Isaac’s favorite son. He had many of the qualities that Isaac lacked: he was hearty, carefree, a good hunter, and physically strong. The question was: would he be the best person to govern the tribe after Jacob’s death?

Rebecca did not think so. She believed that the quiet, intelligent Jacob would do a better job.

She therefore colluded with her younger son, and under her direction, Jacob tricked his dying father into giving the Blessing to him.

‘Then Rebecca took the best garments of her elder son Esau, which were with her in the house, and put them on her younger son Jacob; and she put the skins of the kids on his hands and on the smooth part of his neck’ 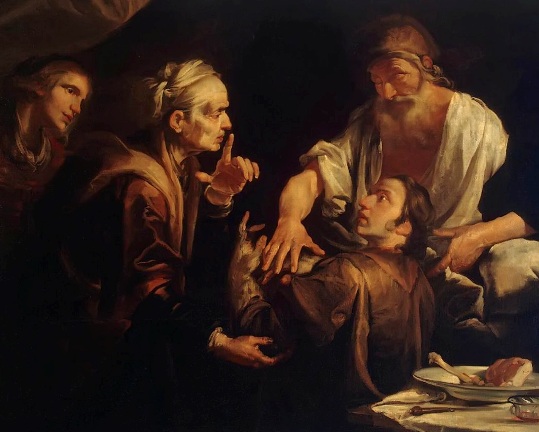 In the modern world, we admire honesty and integrity. The actions of Rebecca and Jacob seem underhand to us.

In ancient times, however, this duo of schemers would have been admired. Trickery and cunning were valued, because the world was dangerous and unpredictable, and people needed every advantage they could get, to survive.

Rebecca may have hated what she had to do – but it was necessary, given Esau’s impetuous foolishness and the long term effect it would have on the tribe.

Some questions about Rebecca’s story

Rebecca had developed from a beautiful, confident young girl into a far-sighted and shrewd woman. She chose the son she believed was more capable of governing the clan. But some questions must be asked:

‘Now Esau hated Jacob because of the Blessing with which his father had blessed him, and Esau said to himself “The days of mourning for my father are approaching; then I will kill my brother Jacob”. But the words of her elder son Esau were told to Rebecca.’

Esau was enraged, as well he might be. He had been betrayed by his mother and his brother and lost the inheritance that was due to him, his birthright and the Blessing.

In response, he planned to kill Jacob as soon as his father died.

But once again, Rebecca stepped in, helping Jacob to escape.

She also maneuvered Isaac into arranging a marriage between Jacob and one of the daughters of Laban, the brother she had left so many years ago in Mesopotamia.

Rebecca means ‘a heifer, a young cow’, a symbol of fertility
Isaac means ‘may God smile/laugh’, perhaps a reference to his mother Sarah’s laughter when she heard she was to become pregnant in her old age
Jacob means ‘he who grabs for something’ – either his brother’s heel at the moment of birth, or his brother’s inheritance later on
Esau was nicknamed Edom, which meant ‘red, Born with a ruddy complexion, he spent most of his time outdoors, so his face and skin may have been unusually red.

That are the main ideas in Rebecca’s story?

Read about
the fascinating women
of the Old and New Testaments

Bible Study Resource for Women in the Bible
Rebecca – Women of the Old Testament
Rebekah, her husband Isaac and her sons Jacob and Esau

Modern films often show the destruction a lie can cause. In ‘Shawshank Redemption’ a man’s life is changed forever because of a lie.

Looking for a meditation on Rebecca’s story?
Try
Tough decisions