Clothes in the ancient world

What did they wear? Bible Study Resource

Over many centuries the Jews, and the early Christians as well, borrowed fashion from all the peoples around them. There were many influences, because they had been 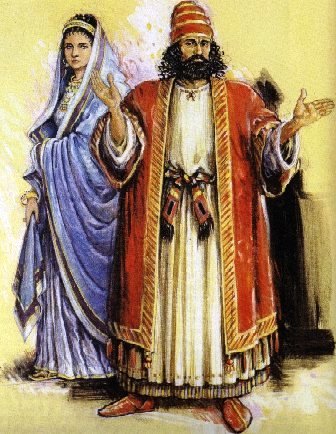 What did they have to work with?

In biblical times the basic textiles were wool and linen. Both could be spun rough or fine. 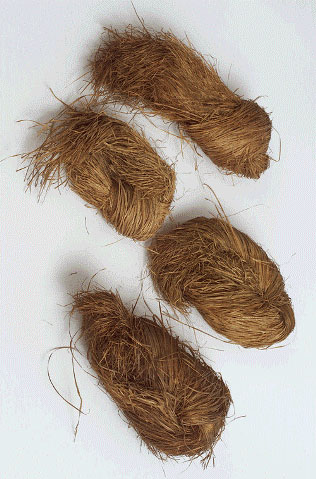 You could not, of course, go to a shop and buy cloth. You had to make your own.

Linen was favored, but making linen out of flax is quite a process. First the outer bark of the stems is removed (after it has rotted) and the fibres separated. Egyptian tablets show the flax being pressed into tubs of water, and Josiah 2:6 refers to the fibres spread out in the sun to dry.

At right are some twisted hanks of flax fibre, probably late Middle Kingdom, about 1850-1750 BC. Not much to look at, but fibre like this made linen that was sought all over the ancient world.

The long fibres were spun into thread and wound onto a spindle held in the hand. The spindle was spun round in the fingers to tighten and strengthen the thread and, to keep this even, a heavy weight known as a ‘whorl’ was attached to one end.

The whorls were made of clay or stone, and the large number of them found in nearly all excavations is evidence of the universal practice of the craft.

It was carried on by women (as described in Proverbs 31:19) rather than by tradesmen, whereas weaving was a trade. 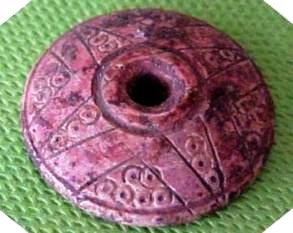 The threads were woven into cloth on a loom made from a long beam supported by posts or in some other way.

The biblical loom was upright, not horizontal, and the weaving was done from the top down. 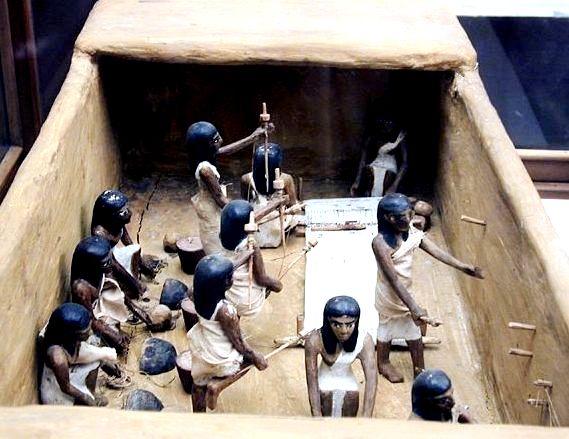 Model of a weaver’s workshop with eleven workers, Cairo Museum 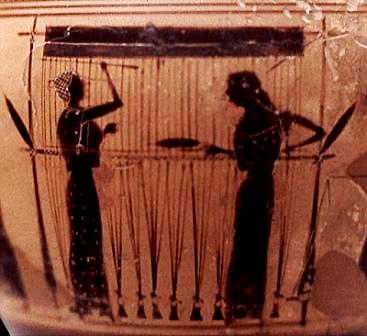 Illustration on a Greek vase, showing women working at a loom 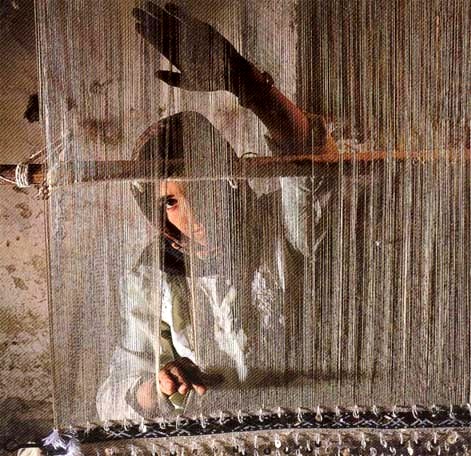 A young Middle Eastern girl sits at a loom, weaving.
Little has changed since ancient times.

When the piece of cloth was finished, the ends of the threads were knotted into fringes to prevent unravelling.

After all his tedious work, the weaver was naturally reluctant to see the cloth cut. Instead of making fitted garments, the rectangular piece of cloth would usually be draped around the body, fringes and all.

The Egyptians excelled in making fine linen, often dyeing the threads to weave coloured or patterned cloth, or embroidering the finished goods.

The Hebrews must have learned some of these skills because later on they were able to build the tabernacle with ‘blue and purple and scarlet and fine twined linen, wrought with needlework’ (Exodus 26:1).

In early days, the yarn was dyed in cold vats, like those of the installation at Debir (below), which dates from the 8th-6th centuries BC. In the post-Exilic period, hot vats were used for dyeing woven cloth, as was customary outside Palestine.

Egyptian wall painting of a young man dressed in the kiltlike loincloth called the ezor. Many Egyptian paintings show such a garment wrapped around the loins and tied with a belt or girdle

The earliest undergarment was probably the kiltlike loincloth worn next to the skin, called ezor (II Kings 1:8; Matthew 3:4). Many Egyptian paintings show such a garment wrapped around the loins and tied with a belt or girdle (hagorah), and Matthew describes John the Baptist wearing clothing like this.

For religious functions, a shirt or apron was tied around the body (I Samuel 2:18; II Samuel 6:14).
In general, the most common garment was the tunic, the ketonet, chiton, or tunica (John 19:23).

This tunic or outer garment was made by simply folding a rectangle of cloth in half and sewing up the sides, leaving openings for the head and arms. This could be worn open or closed, with or without sleeves, depending on the people or place.

The most usual Hebrew term for a top garment, possibly worn over the tunic, is the me’il, although in many cases English versions wrongly translate the term ‘coat’ (see Joseph’s coat). Apparently it was also worn by people of high rank.

Such a costume is pictured in a borderstone of a Babylonian king (circa 1100 BC) although this one was collarless and had short sleeves ending above the elbows. Later on, evidence from the New Testament (Mark 6:9; Luke 3:11) suggests that at times people wore two coats. 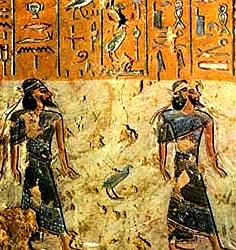 In Old Testament times, most people – men and women – wore a shawl or cloak made of wool or linen draped fairly closely around the body over the tunic.

The saddin may have been similar to the outer cloak (simlah) that was worn, for instance, by King Jehu and his attendants bringing offerings to King Shalmaneser, shown in the black obelisk of Shalmaneser.

See this image at Clothing: the evidence.

What did they wear on their heads? 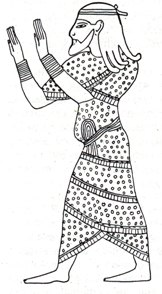 Drawing of one of the tiles from Medinet Habu

The Bible tells how fine linen was wrapped around the head of the High Priest as a turban or mitre — the saniph or kidaris (Exodus 28:39).

Ordinary people wore a kerchief over the head, held tight by a cord reminiscent of the Arab headdress commonly worn today, the ‘aggal.

When bareheaded, men wore a fillet to keep their long hair in place (see right, drawing of one of the tiles from Medinet Habu).

A skull cap or turban was also typical. The peasant or soldier simply wound a simple strip of cloth around the head, leaving one fringed end to hang over the right ear.

Did they wear shoes?

In ancient times men generally went barefoot indoors but outside they protected their feet with a sandal usually made of a simple sole of untanned leather, tied on with straps or latchets (Genesis 14:23; Mark 1:7).

A sandal was the cheapest thing one could imagine (Amos 2:6) — only the shoe-strap was worth less (Genesis 14:23). 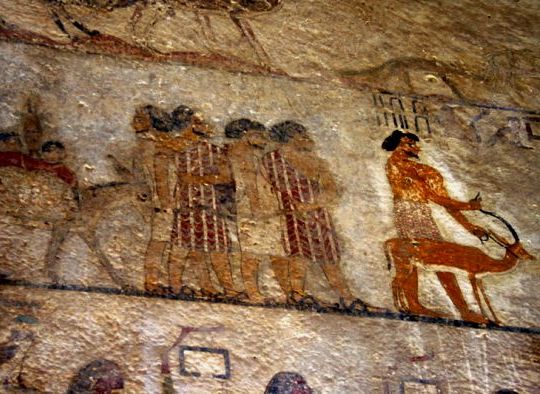 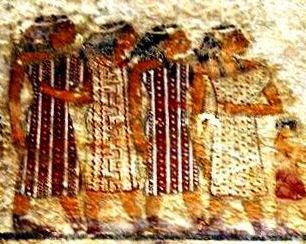 The Egyptian Beni Hassan paintings above show men wearing thonged sandals, while the women have soft low boots of a kind still found in western Asia a few decades ago.

In the black obelisk of Shalmaneser shown below, tribute bearers bringing costly gifts to the Assyrian ruler appear to be shoeless or wearing light shoes. Shoes had to be removed in certain circumstances, for example in the presence of a king or ruler. 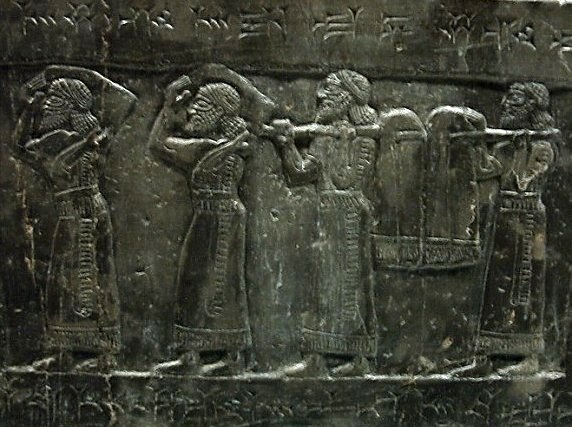 Obelisk of Shalmaneser with tribute bearers bringing gifts for the king.

In later times a much greater elegance was achieved. A good example of second century AD footwear in Israel is the child’s sandal found, with its straps still intact, in a cave of Nahal Hever, last hideout of Bar-Kochba’s partisans. The other sandals were worn by adults. 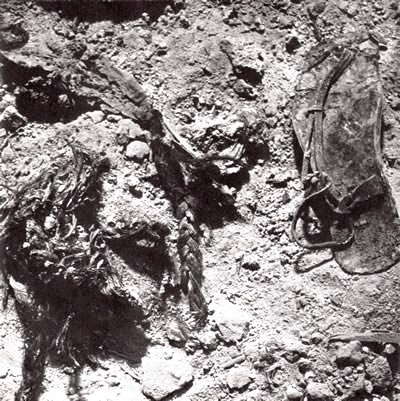 Above: The sandals, with human hair,
at the excavation site at Nahal Hever

Simple strap sandals found in a cave of Nahal Hever 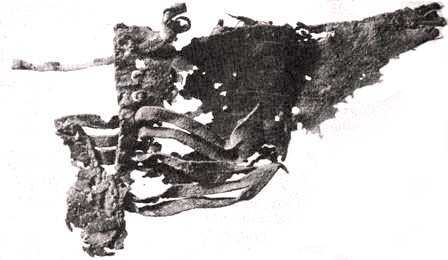 Remnants of a leather woven bag found in the caves at Masada; it must have belonged to the people who took refuge in a cliff-face cave immediately before
the Roman legions broke through

Jewish people were required by their law (Numbers 15:37-41; Deut. 22:12) to put tassels (tzitzit or fringes) on the corners of their garments with a blue cord intertwined in them. This tradition is still followed by observant Jews during services, in the tasselled tzitzit knotted on the four corners of the tallit, a big fringed, four-cornered prayer shawl.

The large tallit, usually made of wool, was worn only during morning prayer and in the afternoon and for all services on the Day of Atonement.

However, a special undergarment, the “arba kanfot” (four corners) or “tallit Utan” (small tallit), was worn perpetually during waking hours under the outer garment.

The blue dye for tzitzit was obtained from the Mediterranean sea snail (murex) from which the ancients (mainly the Phoenicians) obtained blue and purple dyes. Because the use of shellfish gave rise to certain difficulties, the Talmud (Menahot 38a) later taught that all fringes might be white.

Every male garment originally had tzitzits and wearing them differentiated a zealous Jew from his neighbours. Later on, however, they were worn only on intimate garments or in the synagogue.

The Canaanite ivory carvings of Megiddo (12th century BC) show the men wearing long sleeved robes over a coloured tunic (ketonet), embroidered in geometric designs. Over their robes the simlah is wrapped closely around the body, leaving the right shoulder and arm free. On their heads, they have close-fitting caps. 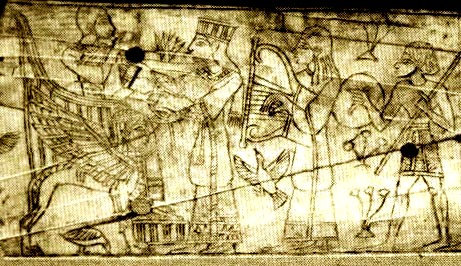 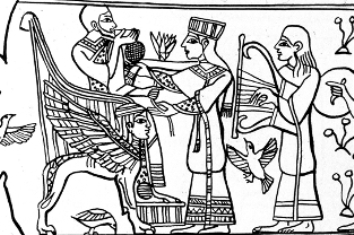 The women are also dressed in long robes (simlah), trimmed at the neck.

An Assyrian law stipulated that a respectable married woman must cover her head, while an unmarried girl must go bareheaded.

The carvings above and at right present a court and/or religious scene, so it may not be a good indication of ordinary Israelite costume of the period. It does show, however, that Iron Age garments were no longer fastened by means of pins, but made use of fibulae or buckles. 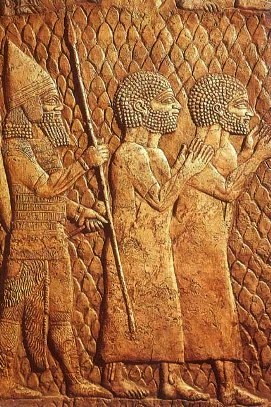 Assyrian sculpture of the capture of Lachish

In the Assyrian sculpture of the capture of Lachish (right), captured Jewish men are dressed in a moderately tight garment fitting closely at the neck (Job 30:18) and reaching almost to the ankles. They wear nothing on their heads – these are a conquered people, at the mercy of their enemies.

Women are shown with a mantle like a long veil wrapped around the body and covering the forehead.

Fashions changed little after Hellenistic times, but they acquired a Roman flavour.

The most interesting feature about Graeco-Roman clothing of the first century AD was the manner in which a long piece of cloth, the “chlamys” as the Greeks called it, or the “pallium” in Latin, was draped over the tunic in a variety of ways.

A special variety of the pallium was the “toga”. The typical flowing garments of Roman citizens, with loose togas and stoles worn over them in various ways as a type of cloak, are shown on a Roman relief of 13 BC, portraying a religious procession (Ara Pacis). 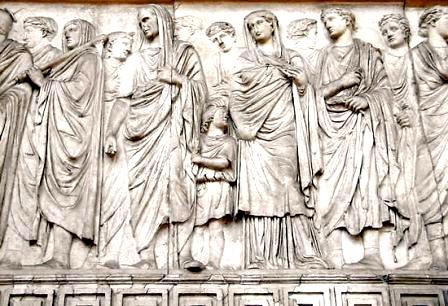 Part of the Ara Pacis, showing the Imperial family

Apparently the emperor Augustus favored the austere toga as the quintessential Roman way of dressing, which is why all members of the Augustan family are shown wearing togas – even, on other parts of this sculpture, small children.

But the ordinary Romans themselves did not like wearing the toga, because it was difficult to put on and inclined to fall off unless one kept one’s left arm bent upwards.

The wealthy and ruling classes in Palestine no doubt dressed like the patricians of Rome but the clothing of ordinary people — like Jesus and his disciples — was much simpler.

Apparently there were six garments :

In those days, Jewish teachers covered their heads, so Jesus may have worn a white linen “napkin” sudarium like a turban. The sudarium was a kind of head kerchief, and is mentioned as a covering for the heads of the dead (John 11:44; 20:7). 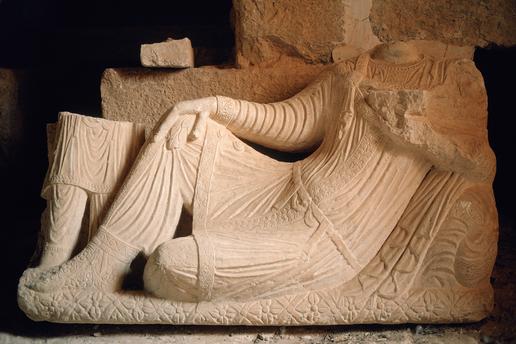 Draped upper tunic with loose trousers: comfort with style! 1st or 2nd century AD, from the Valley of the Tombs, Palmyra

What does the Bible say about clothes?