Was there human sacrifice in the Bible?

Would you sacrifice a child? 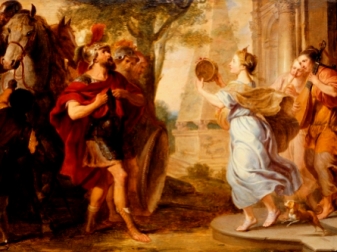 In the Book of Judges, a soldier called Jephtah swears to God that if God gives him victory in battle, he will sacrifice the first creature that meets him when he returns home.

Alas, it is his only child, a daughter, who runs out to greet him. Jephtah is horrified, but keeps his promise and kills the girl.

What should Jephtah have done?

Keep his promise, or break his word to God? The Bible leaves us in no doubt. His action is heavily condemned.

But Jephtah and his daughter become great tragic figures in the Bible.

The other famous Bible story involving human sacrifice is about the great patriarch Abraham and his troubled son Isaac.

Abraham is commanded by God to offer his son Isaac as a sacrifice, and nearly does so.  The Bible tells us nothing about Abraham’s internal struggle or horrified misgivings about the act, or the terror and trauma experienced by Isaac.

This story is held up by modern God-attackers as proof that God is not good but evil, and that Abraham was a fool for worshipping Him.

Not so. The story is not about human sacrifice, but about our faith in God’s ultimate wisdom – even when we do not understand it at all and cannot see any sense in what is happening to us.

We accept what we believe is God’s plan for us, and keep on living our lives as best we can.

These are the only two examples of human sacrifice in which the Jewish people participate.

Did foreigners use human sacrifice?

But the Bible has several mentions of human sacrifice being carried out by enemies of the Jewish tribes. 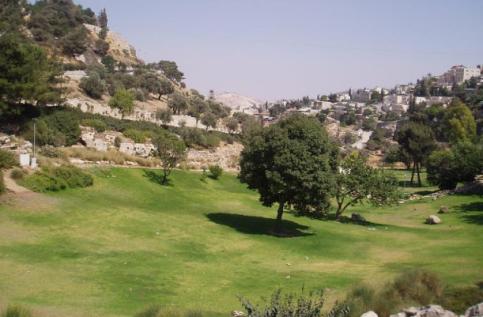 The Valley of Hinnom south of Jerusalem. This is where Josiah found the religious altars on which he believed boys and girls were sacrificed

When the king of Moab saw that the battle was going against him, he took with him seven hundred swordsmen to break through, opposite the king of Edom; but they could not. Then he took his first born son who was to succeed him, and offered him as a burnt offering on the wall. And great wrath came upon Israel, so they withdrew from him and returned to their own land. (2 Kings 3:27).

In fact, an actual human sacrifice is only ever mentioned when an enemy is supposed to have done it – which makes the evidence unconvincing, to say the least.

The only really convincing argument to support the practice of human sacrifice is the fact that the Bible repeatedly forbids it. The Bible rarely forbids something unless it is evil and already happening. It never forbids us to float in the air or eat rainbows, for example…

What does archaeology say?

Archaeologists are fascinated by the idea of human sacrifice. The Carthaginians are said to have practiced it, but the accusation was made by the Romans who were their enemies, and so the evidence is unreliable.

Modern-day archaeologists claim that burial urns containing the burnt remains of children show that these children were human sacrifices – despite cremation being the normal form of burial for Carthaginians, and there being a high infant and child  mortality rate.

So the idea that Carthaginians, or indeed any ancient society, practised human sacrifice should be treated with caution.

To modern readers, child/human sacrifice seems like the ultimate blasphemy. Certainly the Bible condemns the practice.

But it is possible. After all, it would have been the supreme expression of devotion to a cause, if a parent gave a child more precious to them than their own life.

1 Some time later God tested Abraham. He said to him, “Abraham!” “Here I am,” he replied.
2 Then God said, “Take your son, your only son, Isaac, whom you love, and go to the region of Moriah. Sacrifice him there as a burnt offering on one of the mountains I will tell you about.”
3 Early the next morning Abraham got up and saddled his donkey. He took with him two of his servants and his son Isaac. When he had cut enough wood for the burnt offering, he set out for the place God had told him about.
4 On the third day Abraham looked up and saw the place in the distance.

5 He said to his servants, “Stay here with the donkey while I and the boy go over there. We will worship and then we will come back to you.”
6 Abraham took the wood for the burnt offering and placed it on his son Isaac, and he himself carried the fire and the knife. As the two of them went on together,
7 Isaac spoke up and said to his father Abraham, “Father?” “Yes, my son?” Abraham replied. “The fire and wood are here,” Isaac said, “but where is the lamb for the burnt offering?”
8 Abraham answered, “God himself will provide the lamb for the burnt offering, my son.” And the two of them went on together.
9 When they reached the place God had told him about, Abraham built an altar there and arranged the wood on it. He bound his son Isaac and laid him on the altar, on top of the wood. 10 Then he reached out his hand and took the knife to slay his son.

The angel stops the human sacrifice 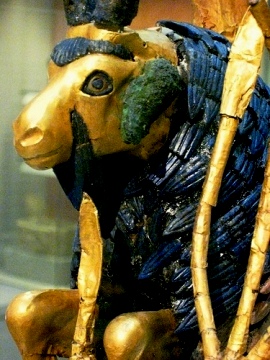 Gold and lapis statue of a ram, from the Death Pit at Ur

11 But the angel of the LORD called out to him from heaven, “Abraham! Abraham!” “Here I am,” he replied
12 “Do not lay a hand on the boy,” he said. “Do not do anything to him. Now I know that you fear God, because you have not withheld from me your son, your only son.”
13 Abraham looked up and there in a thicket he saw a ram caught by its horns. He went over and took the ram and sacrificed it as a burnt offering instead of his son.
14 So Abraham called that place The LORD Will Provide. And to this day it is said, “On the mountain of the LORD it will be provided.”
15 The angel of the LORD called to Abraham from heaven a second time
16 and said, “I swear by myself, declares the LORD, that because you have done this and have not withheld your son, your only son,
17 I will surely bless you and make your descendants as numerous as the stars in the sky and as the sand on the seashore. Your descendants will take possession of the cities of their enemies,
18 and through your offspring all nations on earth will be blessed, because you have obeyed me.”
19 Then Abraham returned to his servants, and they set off together for Beersheba. And Abraham stayed in Beersheba. 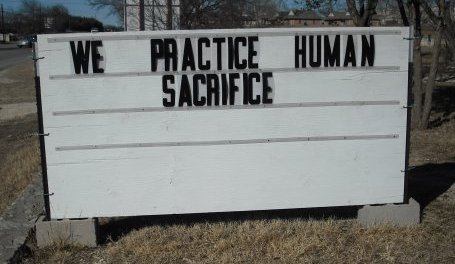 Light-hearted notice board outside a US church

The ram in the thicket

Circumcision
in the Bible