What women wore: the fabrics 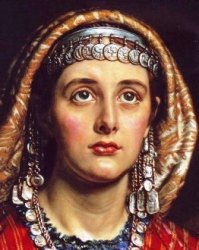 A young woman wearing her dowry

Clothing in ancient Israel was usually

Wool was easier to work with, and it took dyes better. It was also waterproof to some extent, giving better protection against the weather. Linen was finer and more expensive.

Who made the clothes?

Women were largely responsible for production of clothes. They

Their work was by no means finished at this point. When the flax had been harvested they also

A 2nd century Roman priestess of Isis in a loose tunic and cloak, draped to be practical and attractive

The Bible covers a time span of several thousand years, but the type of clothing worn by most Jewish people during that time did not change much.

Jewish styles seem to have been influenced by both

Jewish clothing was fringed, but not like Mesopotamian clothing, which had fringes, overlapping fabric, frills, borders and colored braiding – less was not more in ancient Mesopotamia… See archaeological evidence: ancient clothes.

How do we know this? In Genesis 38.14 there is the story of a feisty woman, Tamar, who was fighting for her rights. She “. . . put off her widow’s garments, put on a veil, wrapped herself up, and sat down at the entrance to Enaim . . .” She was trying to look like a prostitute, so she could seduce her father-in-law Judah. When she had done so, she took off her veil and put on her widow’s clothes again (Gen. 38.19).

For this rather strange story, see Tamar demands her rights.

There may have been similar garments worn by women who were in mourning. 2 Samuel 21.10 records that Rizpah, Saul’s concubine, prepared sackcloth for herself to wear in mourning after her sons were handed over to the Gibeonites.

For this story, see Rizpah, mother of murdered sons

‘Although we cannot guess the color of a widow’s garments, it seems that they were made of rougher material than was typically used to make clothing.’
Women’s Lives in Biblical Times, Jennie R. Ebeling, p.133

What were the items of clothing? 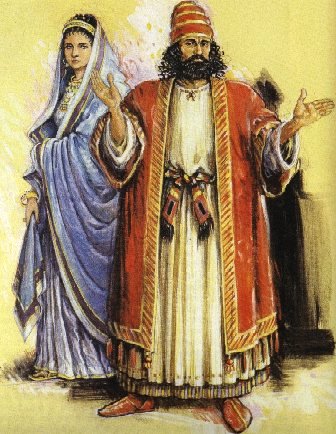 Clothes of the nobility, men’s and women’s, in ancient Israel

Both women and men wore a loincloth, the equivalent of underpants. This was a long thin strip of cloth which was wound around the waist and then between the legs, with the end tucked in at the waist.

Women probably wore some sort of binding around their breasts.

The main garment, worn by both women and men, was the halug, a tunic. This was made of two rectangular pieces of cloth joined in a long seam along the top of the arms, with a hole left for the head to go through. It also had a seam running down both sides, with holes left for the arms.

The halug could be gathered up in a bunch at the shoulders, either with a clip or a tip-loop, or it could be tucked up at the waist if heavy work was being done. Halugs made of fine linen or wool could be draped to fall gracefully.

The halug was worn with a belt, either leather or metal, the decoration depending on the wealth of the wearer.

A cloak could be worn over the halug. The edges and fringes of the cloak were often decorated. 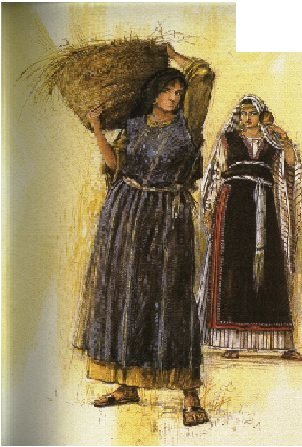 Note:  ‘An interesting ostracon (a piece of inscribed pottery) dating from the seventh century BC from the site of a fortress at Mesad Hashavyahu, near the coast of southern Israel, shows the value of clothing in ancient Israel. In this inscription, which was apparently dictated to a scribe, a field worker appeals to the governor of the fortress for the return of an item of clothing that he complains had been unjustly confiscated by a man named Hoshabyahu ben-Shobi. Although the item of clothing is not specified, it was probably a mantle or cloak given its apparent worth to the worker.’ Women’s Lives in Biblical Times, Jennie R. Ebeling, T & T Clark International, p.93

When women went into public places, they wrapped their long hair in a piece of cloth. This cloth held their hair in place and acted as a head covering in the hot climate. 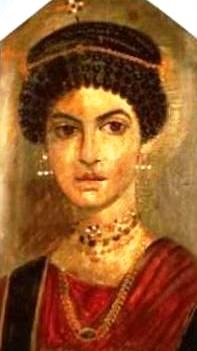 It could also be used as a face covering. Rebecca used it to hide her face when she first met Isaac (Genesis 24:65). But she was not veiled when she was drawing water from the spring (Genesis 24:16).

Total veiling, as worn by some Islamic women today, was not practiced. Sarah’s beauty was obviously visible to those around her (Genesis 12).

Ancient people loved to decorate themselves with jewelry which, as today, was valued for its beauty and for the status it gave to its owner. Every woman had jewelry of some kind, which was part of her personal wealth.

If it was part of her dowry, it would be worn conspicuously, especially on festival days when prospective suitors might be visiting the village – see the image of a young girl at the top of this page.

Jewelry is transportable wealth. It is also an in-your-face status symbol letting everyone know just how rich you are. Women have used jewels for thousands of years. Even Cro-Magnons had necklaces and bracelets.

For some wonderful pictures of ancient jewels, go to Jewellery in the ancient world 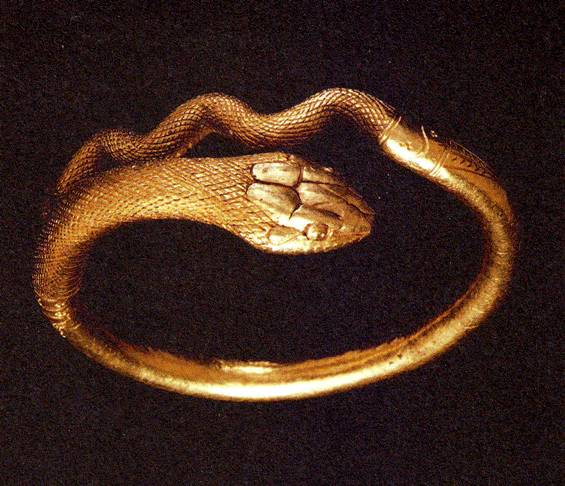 Making the best of what you’ve got

Rich and poor – cosmetics were used by women at all levels of society.

We know that women in ancient times

Make-up, especially for the eyes, was popular.

Of course, there is no direct evidence that women in ancient Israel wore make-up, since there are no Israelite statues or images similar to the Egyptian ones we’re familiar with.

But Israel was always influenced by its powerful neighbor to the south, and it is reasonable to suppose that this influence also affected Hebrew/Israelite women.

Above: 1st century wooden combs found at Qumran in the Judean Desert

Below: Women’s hairpins of ivory and metal

We have a good idea of clothing in New Testament times because of a discovery made in Israel in 1960. Bedouin tribesmen found many artifacts in a cave near En-gedi on the Dead Sea, which were dated to the Bar Kokhba War in 132CE.

See Death at Masada, at the bottom of the webpage on Masada

It appears that during the Bar Kokhba War a group of 17 people, including six children, were trapped in the cave. They starved to death there, rather than surrender to the Roman soldiers who were camped immediately above the entrance to their cave.

A range of textiles was found with their skeletons. There were women’s cloaks, a child’s linen shirt, and skeins and balls of unspun purple wool.

Among the artifacts found in the cave were pieces of jewelry, a box for powder and a brass mirror in a wooden frame.

Dressed for the Occasion

Using the information in this section or from the webpage below, design an outfit you might have worn if you had lived in biblical times. You may use drawings or a written description to show the clothes you have chosen. Describe the cut, the fabric and the color of each item.

For more about clothing, try

Clothing for children in Bible times

Clothes for rich and poor in the ancient world

Why do we wear clothes? Clothes in the Bible

Nazareth people: what they wore

Women of the Bible; Clothing and Houses in Biblical Times
Bible Study Resource

Clothes
in the ancient world

A woman’s life
in ancient Israel