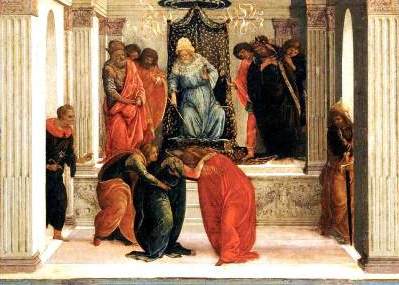 Filippino Lippi, Three scenes from the story of Esther, 1475

The painting is made up of three different scenes. In the first, Mordecai laments the terrible fate that awaits the Jewish people living in Ahasuerus’ realm: all are condemned to die. In the second, Esther faints with fear as she enters the throne room of her husband, and approaches the throne; her body is supported by the two maid-servants who accompany her. In the third, the terrified Haman begs for mercy, but in vain.

Extra information: Many of the images of Esther from this period present her as a parallel to the Virgin Mary – a young woman who also accepted her part in God’s plan, and whose actions saved her people. Esther was presented as a modest and virtuous woman, a true heroine. It did not seem to matter that in the biblical version, Esther was a devious liar who hid her true identity and took part in palace intrigue. All this was forgiven or overlooked, and Esther’s personality was reshaped to fit current ideals of the time. 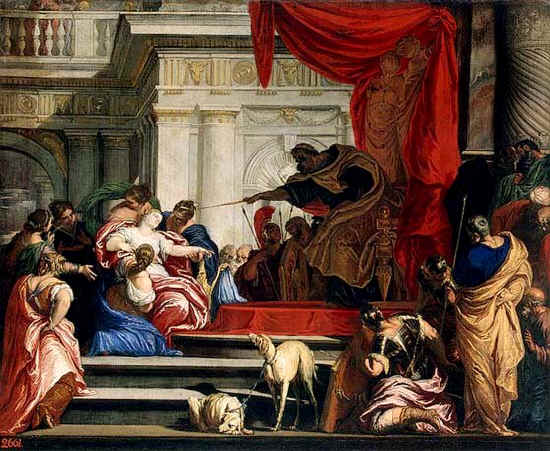 Esther has swooned in the presence of her husband Ahasuerur, but he reaches forward to touch her with the golden scepter, an act that signals that she will not die for her act of lèse-majesté.

Information: Only the dog in center foreground is bored. He has seen it all before. Everyone else is caught up in the swirl of movement and human drama captured so well in this painting by Lefevre. A voluptuous Esther swoons backwards into the arms of her maidservants, as the courtiers crane their necks to see what is happening. The energy and vigor of the King is captured in the swirling movement of his golden cloak. Over all looms the almost oppressive crimson of the wall hangings (red is the color of sexual passion), which seem to dominate the humans in the picture. 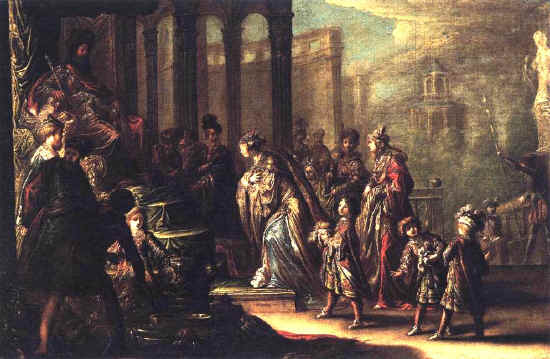 Esther, gorgeously dressed and accompanied by a retinue of servants, bows before the King, her husband. He sits impassively watching her. Perhaps Vignon was suggesting that the King’s measured stare was the cause of her terror and subsequent fainting spell.

Information: Vignon was a leading French painter of the Baroque, and this painting was done after he returned from Rome, where he was influenced by the paintings of Caravaggio – his use of chiaroscuro, while not up to the standard of Caravaggio’s genius, is interesting. The light, what there is of it, falls mostly on Esther. Her husband Ahasuerus is immersed in darkness. One male figure to the right is also bathed in light – presumably this is Mordecia? And is the darkened figure beside him Haman? The children who follow Esther, baby Baroque courtiers all, suggest that she will have many children herself. 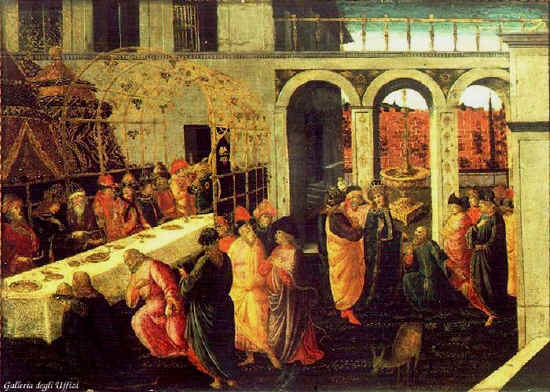 The Persian king Ahasuerus is surrounded by his courtiers, who seem nonplussed, even aghast, at something that has just happened. They have probably heard about Queen Vashti’s message to the king: that she refuses to obey his order to parade herself before the half- or fully-drunk men. Disobedience of a royal order was unthinkable, even for a queen, since the king wielded absolute power.

Information: Palaces in the Persian Empire usually had two separate living areas, one for men and another for women. As well, men and women usually ate separately. This painting shows a banquet for men, attended only by men. When the drunken King Ahasuerus summons his Queen Vashti to show her beauty before the male guests at his banquet, it is an insult to a woman of her rank. She refuses to obey his summons, quite rightly realising that her husband, if he has any sense at all, will later regret giving the order. Usually, only prostitutes and entertainers would appear at these banquets. 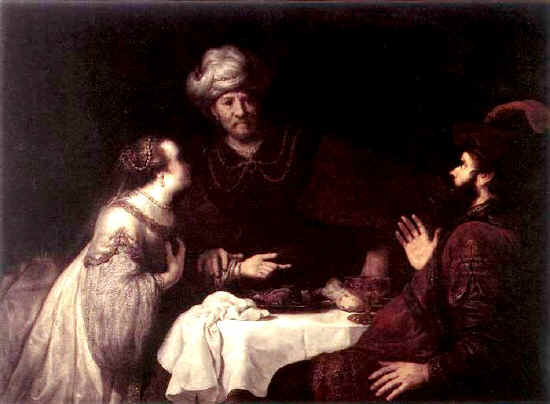 King Ahasuerus places a reassuring hand on Esther’s arm as she tells him that Haman, the man now sitting at table with them, will be the cause of her death, and the death of all her people. Haman is horrified when he realizes he has an enemy, Esther, who will almost certainly bring about his own death.

Information: The Persian court, as depicted in the story of Esther, was not a safe place to be. There were plots, poison, wholesale murder, public hangings, extermination of the families of unsuccessful courtiers, secrets and palace intrigue. On a good day. Esther survived because she was clever, beautiful and lucky – and had God on her side. Rembrandt captures some of the darkness of this gilded court in his somber painting of three of the main characters in her story. 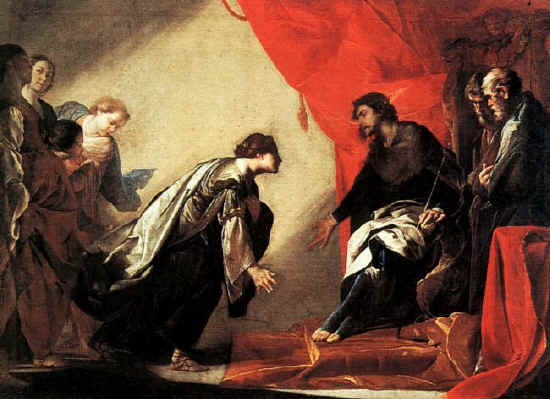 Esther has undergone all the training necessary for her role as Queen, has found favor in Ahasuerus’ eyes, and is now accepted as his new, official partner, a replacement for the banished Queen Vashti.

Information: This painting bears a close resemblance to pictures of saints being received by Christ in heaven – and in a way this must have been the image Cavallino had of Esther’s rise to power. She had hit the jackpot, the painting implies, and was now ascending to the exalted position of Queen of Persia. There were many parallels drawn in religious iconography between Esther and Mary, mother of Jesus, and this painting echoes representations of Jesus receiving his mother into heaven.

See Women in the Bible: Major Events, Choosing a Husband. Compare the criteria for choosing a husband with the way that Ahasuerus chooses a wife. 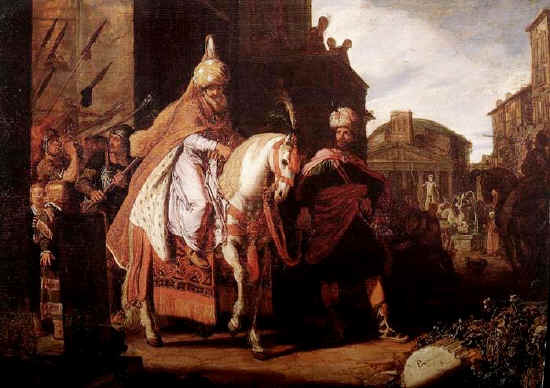 Mordecai once saved the King’s life, but was never rewarded. Later when he was reminded of the deed, King Ahasuerus decided to honor Mordecai by letting him ride through the streets dressed in the King’s own royal robes, riding on the King’s horse, and wearing the royal crown.

Information: This painting records Mordecai’s moment of triumph, as he rides through the streets in a special parade designed to honor him. It is about public recognition of a truly virtuous man – something the world does not often witness. Lastman was one of the first painters to invest the people in his paintings with individual personalities. Notice the wary look on Mordecai’s face, the aggressive hand on hip of the man leading the horse – presumably Mordecia’s bitter enemy Haman, or the alert face of the trooper who follows them.