Who was Naamah in the Bible? 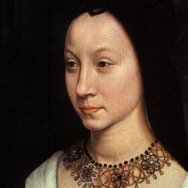 She had a crowded life, yet there is virtually no trace of her. We know her name, where she came from, her husband’s and son’s names – and nothing else. Reconstructing her life is a detective game.

If she lived past childbirth, she saw 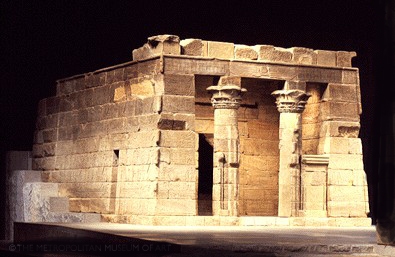 The Temple of Dendur, Egypt. Solomon’s Temple was probably similar in design

If she lived past Solomon’s death, she saw

What do we know about Naamah? 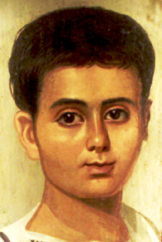 Naamah was one of the many wives of Solomon – the biblical text says he had seven hundred wives and three hundred concubines (!), certainly an exaggeration of the real numbers but a graphic indication of how extraordinarily fond he was of women.

The biblical text (see below) says he loved them and clung to them, implying he was a man who enjoyed the pleasures of women above the duties of his position.

This may have been so, but Solomon also used marriage to cement relations between Israel and the surrounding territories and nations. He was not like his father David. He had a different vision of what a king should be: a hereditary political monarch rather than a popularly acclaimed leader.

After Solomon’s reign primogeniture became the sometimes disputed but generally accepted principle of succession in Israel. 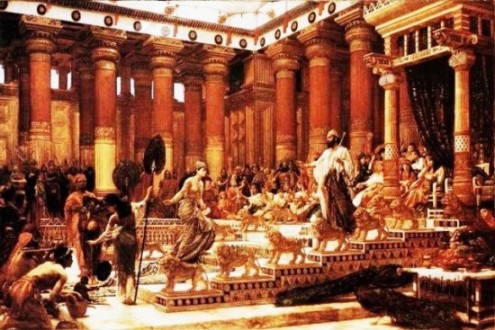 19th century artists painted Solomon in a lavish palace; in fact, Solomon’s palace in Jerusalem was relatively modest in size.
Above, the fantasy: Visit of the Queen of Sheba, Edward Poynter
Below, the more modest reality: Throne Room at Knossos 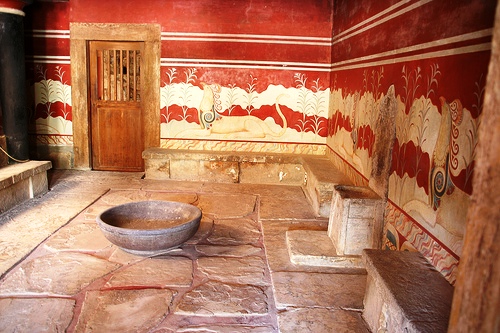 A Foreign Wife from Ammon

Naamah was from Ammon, a kingdom to the east of Jerusalem (see right center of map).

Presumably she was a princess of the royal house, but this is not mentioned. She is simply referred to as ‘the Ammonite’, in much to same way that Marie Antoinette was referred to as ‘the Austrian’, a disparaging title summing up the hostility of the common people to a marriage between their king and a princess from a country they mistrusted.

Ammon had an on-again, off-again relationship with Israel – it was anything but stable.

Despite this, her marriage was meant to encourage friendly relations between Solomon’s realm and Ammon, and Naamah was expected to use her influence to help the two states live in harmony. 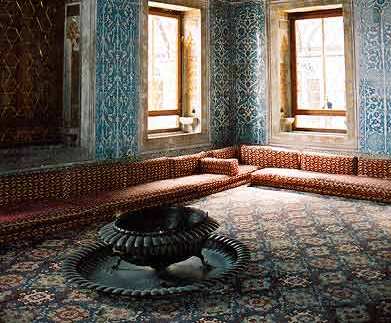 She stood out from the crowd of women in the royal harem, so she must have had

She lived most of her life in a harem dominated by Solomon’s mother, Bathsheba – if Bathsheba lived into old age.

The mother of the king, not his wife (a king had many) was the one who ruled the roost in ancient Israel.

Mother of the King Rehoboam

Naaman was mother of Rehoboam, the king who succeeded Solomon.

If she lived to see his reign, she would have been the most powerful woman in the realm, the gebira or Queen Mother. She would

What does the Bible say about Naamah? 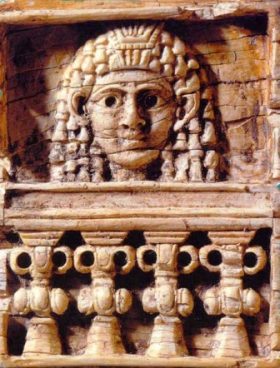 21 And Rehoboam the son of Solomon reigned in Judah. Rehoboam was forty-one years old when he began to reign, and he reigned seventeen years in Jerusalem, the city which the Lord did choose out of all the tribes of Israel, to put his name there. And his mother’s name was Naamah an Ammonitess.

22 And Judah did evil in the sight of the Lord, and they provoked the Lord to jealousy with their sins which they had committed, worse than their fathers had done.

23 For they also built high places, and images, and groves, on every high hill, and under every green tree.
24 And there were also sodomites in the land: and they did according to all the abominations of the nations which the Lord cast out before the children of Israel. 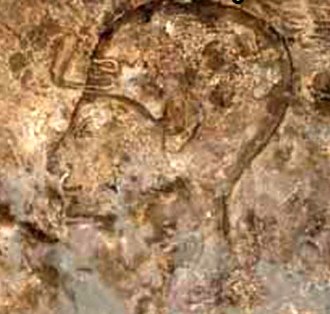 A stone relief of Shishak of Egypt

27 And king Rehoboam made in their stead brass shields, and gave them to the chief of the guard, which kept the door of the king’s house.
28 And it was so, when the king went into the house of the Lord, that the guard bore them, and brought them back into the guard chamber.

Naamah’s World: The City of Jerusalem

If Naamah lived into old age, she saw the building of Solomon’s Temple and the Jerusalem palace. 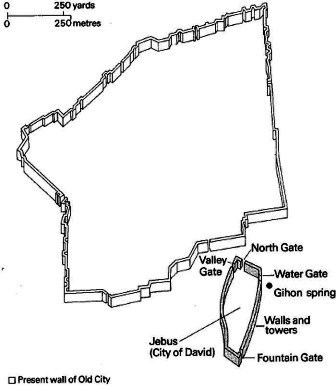 The walled fortress of Jerusalem at the time of King David (lower right of the image). The upper area had houses, but was not fortified.

At the beginning of her marriage Jerusalem was not really a city, not like Troy, even though the site Jerusalem stood on had already been occupied for at least a thousand years.

The city started life as little more than a guard house keeping watch over the threshing floors on the large flat areas of rock on what is now the Temple Mount.

But over the years it grew in importance and Solomon transformed it, so that it became the scene of luxury and comfort.

Then as now, luxury and comfort were perks of the rich and highly placed.

But things were not so easy for ordinary people, and Naamah witnessed a period of extraordinary social transition.

Before the consolidation of the Hebrew tribes, there had been

But the population had tripled in the past two centuries, and more land had to be opened up for farming.

This took large amounts of money and careful organisation, which were things only a central administration could provide. 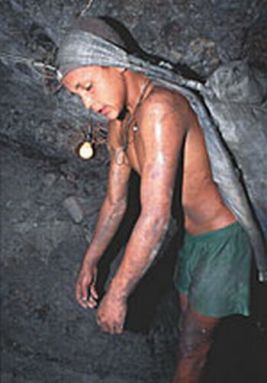 Now the tribes had a permanent king.

The aim of his wars was no longer to save Israel but to control trade routes and subjugate surrounding nations, taking over their land and using their people as forced labor.

Was life now much different from Egypt, where they had been the slaves of Pharaoh?

People blamed much of this social upheaval on the power and influence of Solomon’s foreign wives, among whom Naamah was prominent. We suspect she was never a committed worshipper of Yahweh, and that she probably supported and took part in worship of foreign deities from Ammon.

This would have caused resentment among the priests of Yahweh, who were extremely powerful.

She and the other wives were blamed for Solomon’s religious laxity. He not only tolerated worship of the foreign deities favoured by his wives, but took part in it.

People felt this had resulted in

The Bible’s take on foreign wives 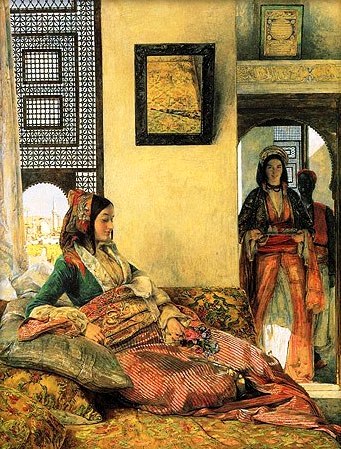 They were from nations about which the LORD had told the Israelites, “You must not intermarry with them, because they will surely turn your hearts after their gods.” Nevertheless, Solomon held fast to them in love.
He had seven hundred wives of royal birth and three hundred concubines, and his wives led him astray.
As Solomon grew old, his wives turned his heart after other gods, and his heart was not fully devoted to the LORD his God, as the heart of David his father had been.
He followed Ashtoreth the goddess of the Sidonians, and Molech the detestable god of the Ammonites.
So Solomon did evil in the eyes of the LORD; he did not follow the LORD completely, as David his father had done.
On a hill east of Jerusalem, Solomon built a high place for Chemosh the detestable god of Moab, and for Molech the detestable god of the Ammonites.
He did the same for all his foreign wives, who burned incense and offered sacrifices to their gods.’

The question still remains: why are we given so little information about Naamah?

These are the tantalizing questions we cannot answer.

Women in the Bible – the Royal Women of the House of David
Naamah – Ammonite princess, wife of King Solomon, mother of King Rehoboam

Life in
the royal harem