Cain and Abel were two brothers who followed different paths: Cain was a farmer and Abel was a shepherd. At the end of the year they made an offering to God of the things they had produced.

God showed favour to Abel, but not to Cain. Angered by God’s rejection and filled with resentment – as the Bible says, ‘sin was crouching at his door’, Cain killed his brother. God banished Cain and put a mark on him, the famous ‘mark of Cain’. 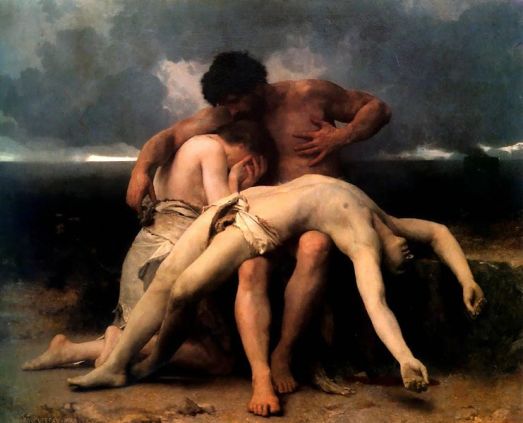 ‘The First Mourning’ by Bougeureau speaks to every parent’s worst fear. Adam and Eve have found the body of their beloved son Abel. Adam’s left hand is spread protectively across his heart, as if to ease the pain and grief. Eve is beyond being comforted. One of her sons is dead, killed by the other. At the back of her mind is that moment in the Garden of Eden when she made the wrong decision and turned away from God. Is she to blame for what has happened? Behind them, the world is an empty void, showing that they know already that the murderer is Cain. 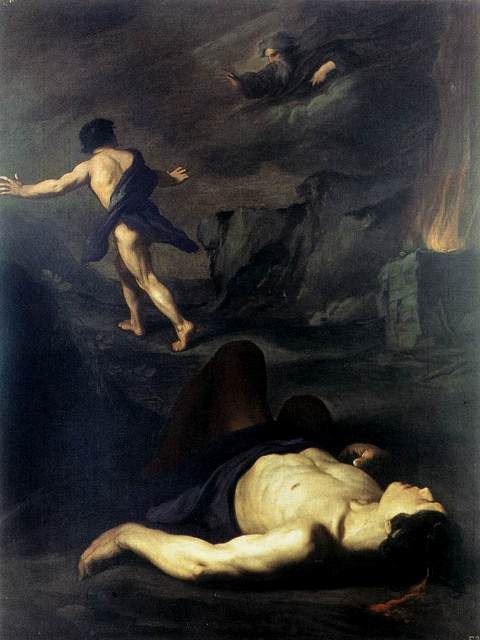 Contrast the skin tones of the two male bodies: Cain, fleeing, has living flesh, but Abel has a luminous pale quality as he lapses into Death. This luminosity dominates the canvas. He seems to have been killed by a sharp blow to the head; his beautiful body is unmarred. God appears above the sacrificial altar, speaking his judgement against the first murder and the first fratricide. 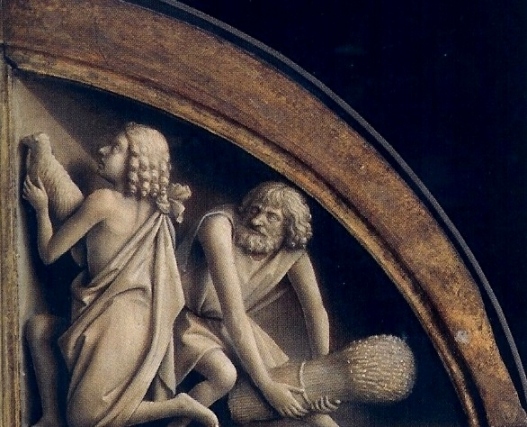 (Above) The Ghent altarpiece has Cain holding a sheaf of wheat as if it is a weapon. His face is twisted in hate, but his brother Abel seems oblivious of the danger behind him.
(Below) Cain in the act of murdering his hapless brother. Cain represents farmers, Abel is a herder of cattle. Their conflict is the enmity between two ways of life.
See The Bible as History: the story of Cain and Abel. 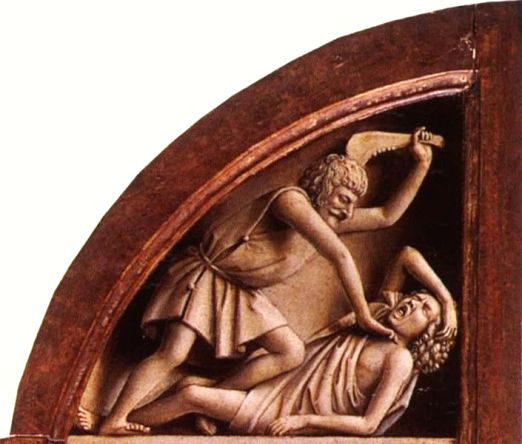 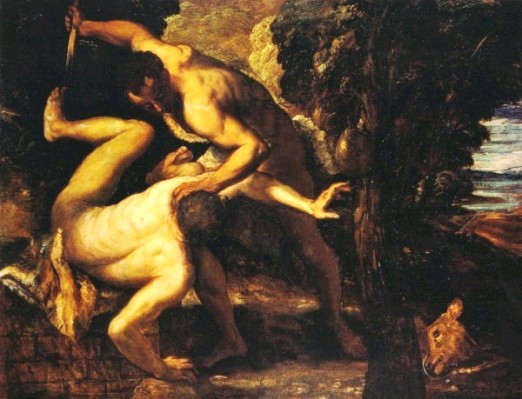 Tintoretto was a master at painting the human body, and the struggle between Cain and Abel was a perfect opportunity to show his skill. He was extraordinarly talented at painting from an unexpected viewpoint, and the two dramatic figures seem to be tumbling out of the painting towards the viewer. Abel’s slaughtered offering of a calf watches mutely as the brothers struggle.

Panel showing episodes in the story of Cain and Abel, Ghiberti, the Gates of Paradise on the Baptistry in Florence 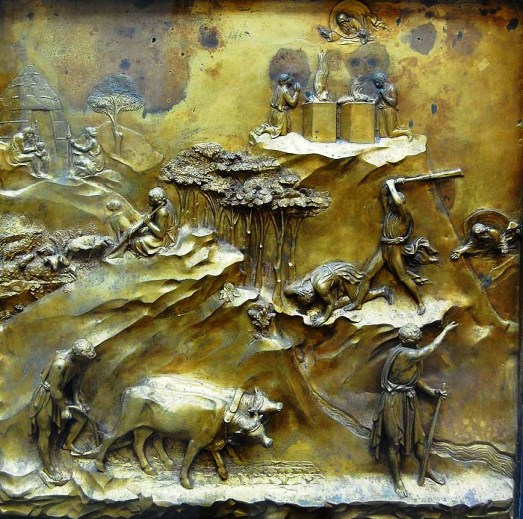 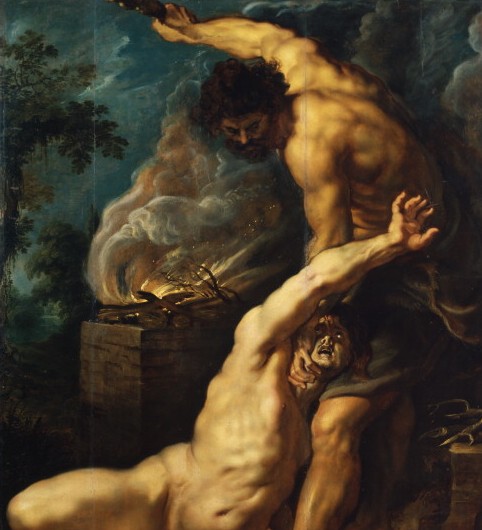 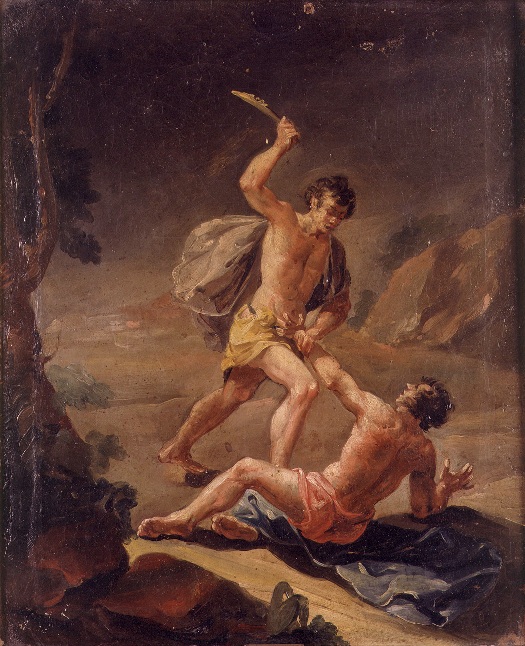 Eve with Cain and Abel, Bacchiacci 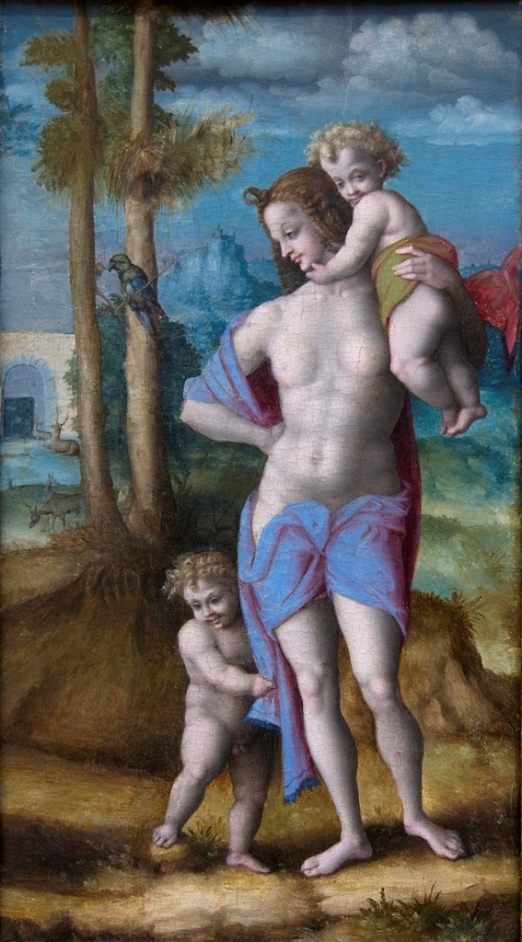 This is an odd painting. The two little brothers, Cain and Abel, are shown with their semi-naked mother Eve. It seems to be after the Fall, since Eve has seen the need to cover herself with a mantle. The family is no longer in the Garden of Eden.

Why paint this scene at all? It does not figure anywhere in the Genesis story. The only possible explanation is that this picture is meant to partner all those paintings of Mary of Nazareth with the child Jesus and John the Baptist. These other paintings show mankind redeemed; perhaps this painting by Bacchiacci shows why the birth (and death) of Jesus was necessary.

1 Adam lay with his wife Eve, and she became pregnant and gave birth to Cain. She said, “With the help of the Lord I have brought forth a man.”
2 Later she gave birth to his brother Abel. Now Abel kept flocks, and Cain worked the soil.
3 In the course of time Cain brought some of the fruits of the soil as an offering to the Lord.
4 But Abel brought fat portions from some of the firstborn of his flock. The Lord looked with favor on Abel and his offering,
5 but on Cain and his offering he did not look with favor. So Cain was very angry, and his face was downcast.
6 Then the Lord said to Cain, “Why are you angry? Why is your face downcast?
7 If you do what is right, will you not be accepted? But if you do not do what is right, sin is crouching at your door; it desires to have you, but you must master it.”
8 Now Cain said to his brother Abel, “Let’s go out to the field.” And while they were in the field, Cain attacked his brother Abel and killed him.
9 Then the Lord said to Cain, “Where is your brother Abel?” “I don’t know,” he replied. “Am I my brother’s keeper?”
10 The Lord said, “What have you done? Listen! Your brother’s blood cries out to me from the ground.
11 Now you are under a curse and driven from the ground, which opened its mouth to receive your brother’s blood from your hand.
12 When you work the ground, it will no longer yield its crops for you. You will be a restless wanderer on the earth.”
13 Cain said to the Lord, “My punishment is more than I can bear.
14 Today you are driving me from the land, and I will be hidden from your presence; I will be a restless wanderer on the earth, and whoever finds me will kill me.”
15 But the Lord said to him, “Not so; if anyone kills Cain, he will suffer vengeance seven times over.” Then the Lord put a mark on Cain so that no one who found him would kill him.
16 So Cain went out from the Lord’s presence and lived in the land of Nod, east of Eden.

The story of
Cain & Abel