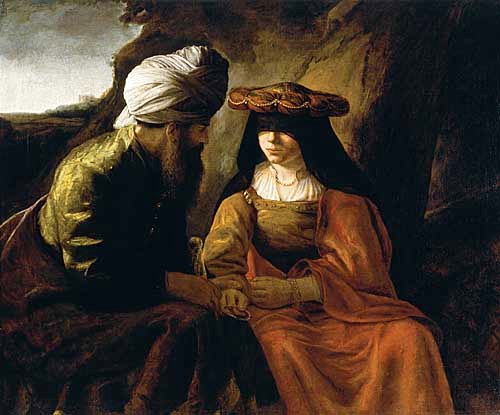 Tamar, disguised as a prostitute, offers sex to her unsuspecting father-in-law Judah. He has been recently widowed, and shows no reluctance.

This painting has been attributed to a number of painters, including Gerbrand van den Eeckhout and Aert van der Gelder. The subject of Tamar and Judah was popular among Protestant painters of the time. The Bible story’s message was that people have a right to act independently to obtain justice for themselves, and it therefore made an oblique reference to the political events at that time, as the Netherlands and other newly Protestant countries tried to break away from Catholic Spain. 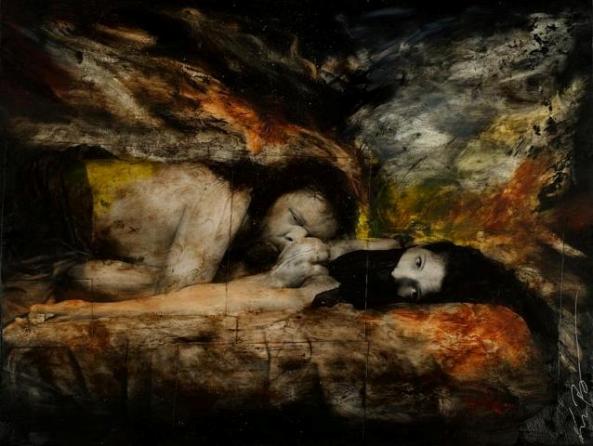 Each of the two people depicted here is lost in thought. They do not communicate with each other. Neither shows joy or happiness. Tamar looks outwards towards the viewer, with whom she seeks to communicate. As far as she is concerned, the necessary deed is done.
Despite the sex he has just had, Judah shows no emotion. His expression is introspective, joyless. Even the comfort of a woman’s body cannot help him forget the loss of his wife and two sons. 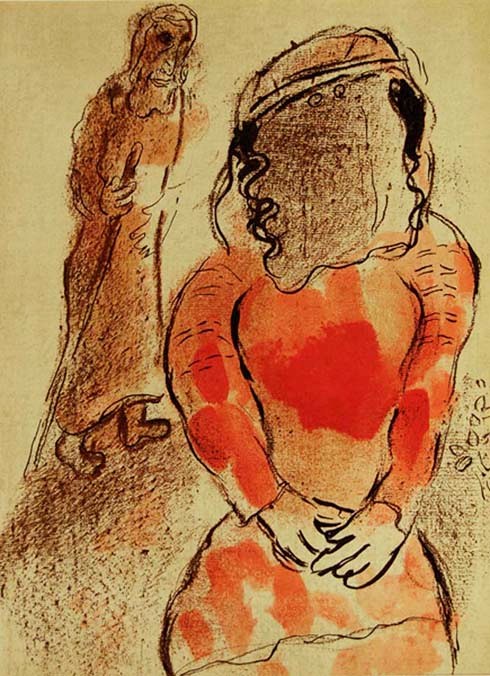 Judah approaches Tamar who stands waiting for him on the road. In Chagall’s picture she is dressed in the veil of a prostitute, with only her tiny, alarmed eyes peeping out at the top. But her clothing is flamboyantly red-orange, the color of sexual passion – the archetypal ‘scarlet woman’.

This lithograph was produced in the same year that Chagall designed the stained glass windows for the synagogue of the Hadassah Ein Kerem Hospital in Jerusalem. The windows depict the twelve tribes of Israel, suggesting that Chagall at this time was preoccupied with Jewish biblical history, and saw the encounter between Tamar and Judah as a pivotal moment in the story of the Jewish people. 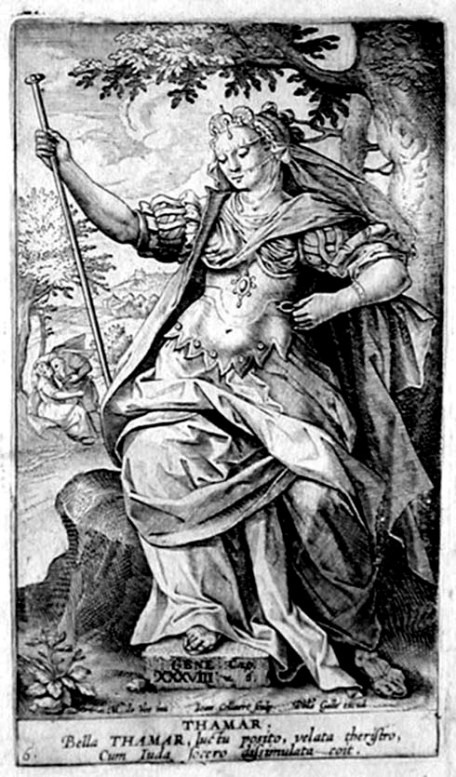 Tamar (‘Bella Thamar’) stands triumphant at the entrance of Enaim, on the road to Timnah. The staff and ring she holds signal that she has been successful in her mission to seduce Judah. The man and woman (Tamar and Judah) in the background of the engraving suggest that coitus has already occurred -see also the neo-Latin inscription at the bottom of the image.

Most images of this story show Tamar and Judah together, and in fact there is a small picture of them together at the back of the main figure. This engraving is unusual in that it shows Tamar (Thamar) standing alone. She has accomplished her mission and can now await the birth of her child – or rather children, since she will bear twin sons to Judah. How interesting that none of the paintings or engravings of Tamar ever seem to show her children…. 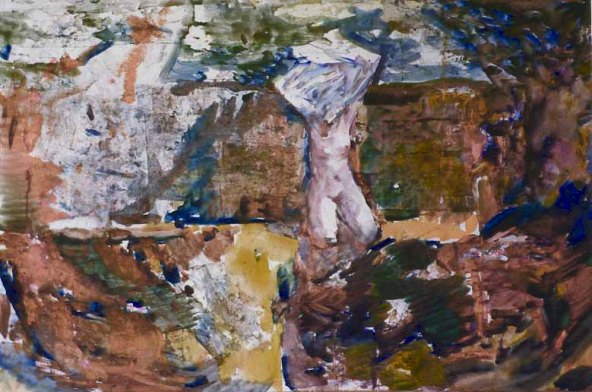 Tamar shows her body, but not her face. Her vulnerable body is almost lost in the swirl of emotions around her. But she is the central focus of a chaotic landscape. The paleness of her skin accentuates her fragility. She does what she does because she must, because it is forced on her. 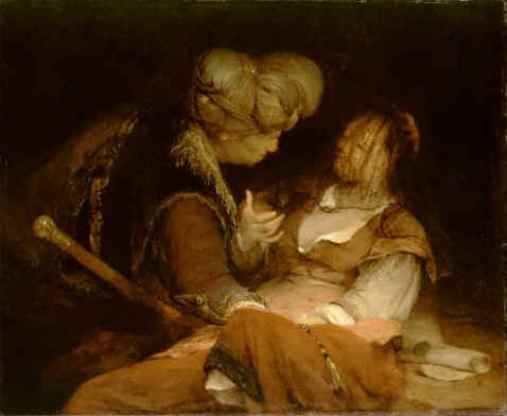 Tamar has covered her face so that her identity is hidden, but her clothes are disheveled, suggesting her task as a prostitute. The suggestive angle of Judah’s staff leaves no doubt as to the activity underway.

Rembrandt was Aert de Gelder’s teacher, and his influence is clear in this painting. Rembrandt himself did a charming drawing of Tamar and Judah sitting by the roadside apparently doing nothing more suspect than chatting. It is unusual for a painting of this period to be as robustly explicit about sex as this. 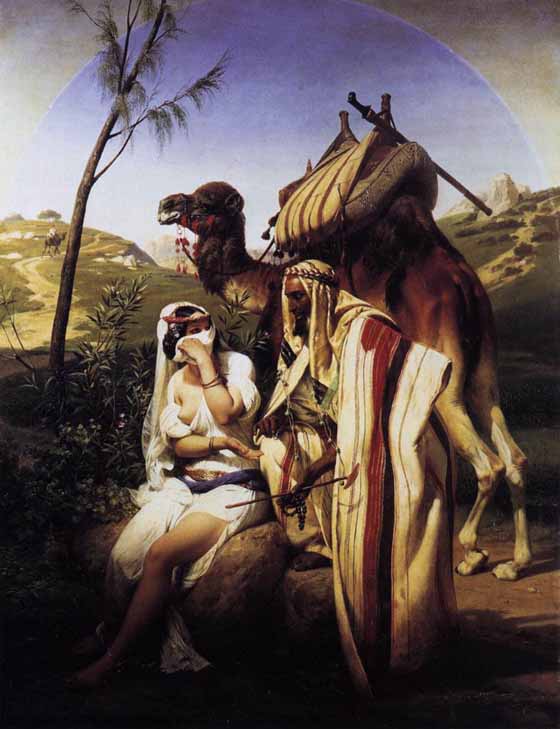 Tamar covers her face, a custom followed by prostitutes at the time, but leaves her leg and breast bare, so that Judah has no doubt of the offer she is making. They are discussing price, and he offers his staff and seal as a temporary payment.

Emile Vernet was most famous for his battle scenes – he was a young man at the time of Napoleon, and was intrigued by the glamour and horror of war. Interestingly, when he painted a scene from the Bible he chose an incident in which a type of battle is being fought – between Tamar and Judah, for her right to a child. She manages to outfox the enemy (in the form of the patriarch Judah) by using the weapons available to a woman. The picture itself is extremely suggestive – click for an enlargement to see how Vernet made Judah’s sexual intentions all too plain to see.

How Far Should a Woman Go?

Tamar was Judah’s daughter-in-law, the widow of his two elder sons. Both her husbands ‘spilt their seed’, practising a form of birth control, so Tamar was childless – a terrible fate for a Jewish woman.

To change her fortune she demanded her right to a Levirate marriage (marriage to her deceased husband’s brother, in this case Judah’s youngest son Shelah). But Judah fobbed her off, and eventually she decided her only option was to trick him. She disguised herself as a prostitute, took up a position at the side of the road , and solicited him when he passed. Recently widowed, Judah was happy to comply, and Tamar conceived.

As payment for services rendered, Judah promised to send her a goat from his flock. In the meantime he left his tribal leader’s staff, his personal seal and cord as a pledge.

Some months later when it became obvious she was pregnant Tamar was branded as a whore, and condemned by the unsuspecting Judah to burn to death.

At this dramatic moment Tamar produced the staff, seal and cord, proving that Judah himself was the father of her child. In time, she gave birth to twin boys, whom she named Perez and Zerah. Through Perez she became the direct forebear of King David.

The Story of a Determined Woman
Genesis 38

1 It happened at that time that Judah went down from his brothers and settled near a certain Adullamite whose name was Hirah.
2There Judah saw the daughter of a certain Canaanite whose name was Shua; he married her and went in to her.
3She conceived and bore a son; and he named him Er.
4Again she conceived and bore a son whom she named Onan.
5Yet again she bore a son, and she named him Shelah. She was in Chezib when she bore him.
6Judah took a wife for Er his firstborn; her name was Tamar. 7But Er, Judah’s firstborn, was wicked in the sight of the Lord, and the Lord put him to death.

8 Then Judah said to Onan, ‘Go in to your brother’s wife and perform the duty of a brother-in-law to her; raise up offspring for your brother.’
9But since Onan knew that the offspring would not be his, he spilled his semen on the ground whenever he went in to his brother’s wife, so that he would not give offspring to his brother.
10What he did was displeasing in the sight of the Lord, and he put him to death also.
11Then Judah said to his daughter-in-law Tamar, ‘Remain a widow in your father’s house until my son Shelah grows up’—for he feared that he too would die, like his brothers. So Tamar went to live in her father’s house.

12 In course of time the wife of Judah, Shua’s daughter, died; when Judah’s time of mourning was over, he went up to Timnah to his sheep-shearers, he and his friend Hirah the Adullamite.
13When Tamar was told, ‘Your father-in-law is going up to Timnah to shear his sheep’,
14she put off her widow’s garments, put on a veil, wrapped herself up, and sat down at the entrance to Enaim, which is on the road to Timnah. She saw that Shelah was grown up, yet she had not been given to him in marriage.
15When Judah saw her, he thought her to be a prostitute, for she had covered her face.
16He went over to her at the roadside, and said, ‘Come, let me come in to you’, for he did not know that she was his daughter-in-law.

She said, ‘What will you give me, that you may come in to me?’
17He answered, ‘I will send you a kid from the flock.’ And she said, ‘Only if you give me a pledge, until you send it.’
18He said, ‘What pledge shall I give you?’ She replied, ‘Your signet and your cord, and the staff that is in your hand.’ So he gave them to her, and went in to her, and she conceived by him.
19Then she got up and went away, and taking off her veil she put on the garments of her widowhood.

20 When Judah sent the kid by his friend the Adullamite, to recover the pledge from the woman, he could not find her.
21He asked the townspeople, ‘Where is the temple prostitute who was at Enaim by the wayside?’ But they said, ‘No prostitute has been here.’
22So he returned to Judah, and said, ‘I have not found her; moreover, the townspeople said, “No prostitute has been here.” ’
23Judah replied, ‘Let her keep the things as her own, otherwise we will be laughed at; you see, I sent this kid, and you could not find her.’

Tamar is Pregnant, and Condemned

24 About three months later Judah was told, ‘Your daughter-in-law Tamar has played the whore; moreover she is pregnant as a result of whoredom.’ And Judah said, ‘Bring her out, and let her be burned.’
25As she was being brought out, she sent word to her father-in-law, ‘It was the owner of these who made me pregnant.’ And she said, ‘Take note, please, whose these are, the signet and the cord and the staff.’
26Then Judah acknowledged them and said, ‘She is more in the right than I, since I did not give her to my son Shelah.’ And he did not lie with her again.

27 When the time of her delivery came, there were twins in her womb.
28While she was in labour, one put out a hand; and the midwife took and bound on his hand a crimson thread, saying, ‘This one came out first.’
29But just then he drew back his hand, and out came his brother; and she said, ‘What a breach you have made for yourself!’ Therefore he was named Perez.
30Afterwards his brother came out with the crimson thread on his hand; and he was named Zerah.

Bible Art: Paintings and Artworks from the Old Testament – Bible Study Resource: One of Tamar’s husbands, possible both, masturbates so she has twin sons by her father-in-law Judah

Having a baby, or two

Judah fobbed her off, and eventually she decided her only option was to trick him. She disguised herself as a prostitute, took up a position at the side of the road , and solicited him when he passed.

‘When Tamar went into labor, she was the center of a tight little band of kinswomen and villagers: a midwife, her relatives and her friends. The pain was not a shock. She knew what to expect, having seen other village women giving birth…’

‘Under Levirate law, Er’s younger brother Onan was obliged to give Tamar a child. But he refused outright to do so, probably because any child born to Tamar would carry Er’s name, not Onan’s, and when their father died the child would inherit the dead brother’s portion of the estate. He practiced the same form of birth control, and Tamar did not conceive.’