What was the Tabernacle?

The Hebrew tribes were wanderers, nomads before they settled in Israel. They carried all they owned and valued with them. 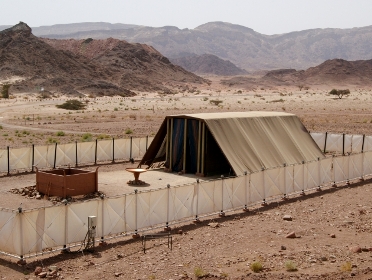 And what one thing did they value above all others? The ‘tabernacle’ (mishkan in Hebrew). This was the portable tent shrine holding the sacred Ark of the Covenant.

It had been a temporary structure erected at the Shiloh sanctuary. Then it was carried by David’s followers to Jerusalem where it remained until Solomon’s Temple was built.

The Ark and Tabernacle were Yahweh‘s dwelling place.

What was the Tabernacle called?

The priests kept the old name of the desert tent of assembly (ohel mo‘éd Exodus 33:7-11) but also called it the mishkan (home-place) to suggest that God who dwelt in heaven might also make a home on earth.

The Tabernacle did not suddenly happen. There was a process of development:

The priestly idea of a tabernacle has an echo of a pre-Jerusalem tradition in the Pentateuch (Genesis, Exodus, Leviticus, Numbers, and Deuteronomy) and the historical books (Samuel, Kings, Chronicles).

Moreover the motif of a desert Tent persisted from the earliest times right through to the Tent of David. 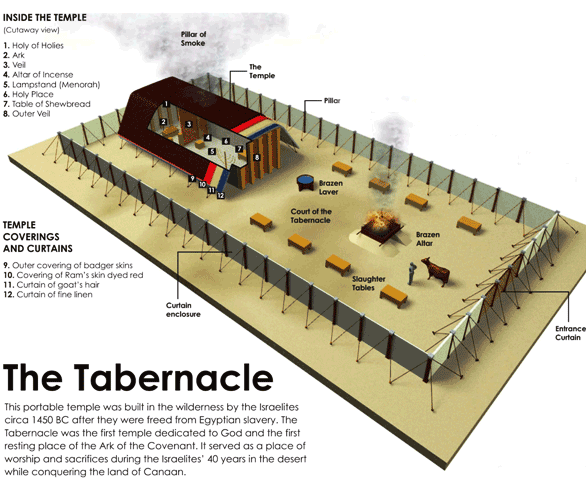 A reconstruction of the portable Tabernacle in the pre-Davidic period. The Tabernacle of the wandering Hebrew tribes in the desert may have been more modest than this – it had to be light and portable

Traditional Description of the Tabernacle

The Court: the Tabernacle stood in the centre of the camp in a rectangular enclosure measuring 100×50 cubits, (approx. 150×75 feet). The entrance was closed by a colourful embroidered screen. Embroidered curtains hung from pillars standing in sockets of bronze to screen off the rest of the area.

The Altar: in the centre of the court stood the altar of burnt offering, made of a hollow chest of acacia wood sheathed with bronze. At each corner was one of the four horns of the altar. A bronze grating covered the lower half of the altar, from the ground to a projecting ledge halfway up the side. This allowed for sacriﬁcial blood to be dashed against the sides and base of the altar. The altar was also ﬁtted with rings and poles so that it could be carried. Beside the altar stood the bronze laver of water for the ablutions of the priests.

The Holy Place: the inner sanctum was furnished with

1. the table of shewbread, (the bread of the presence), with its golden plates, dishes or cups for frankincense
2. a golden candlestick (possibly a seven-branched lampstand or menorah) which faced the table of shewbread and had with golden snuffers for dressing the wicks of the lamps
3. the square altar of incense, made of acacia wood overlaid with gold, also ﬁtted with rings and poles

The lay-out of the Tabernacle, and later the Jerusalem Temple, was probably similar to many other temples in the ancient world (see the temple at Bel Palmyra above). Spatially, there were ascending degrees of holiness as you approached the Holy of Holies at the back of the cella

The Holy of Holies

What was the Holy of Holies? It was a square space that held the Ark of the Covenant and the golden slab of the mercy seat (kapporeth) with a cherub of pure beaten gold at either end.

It is described as being gold, silver and bronze, with sumptuous carvings and decoration.

But this presents obvious diﬁiculties. 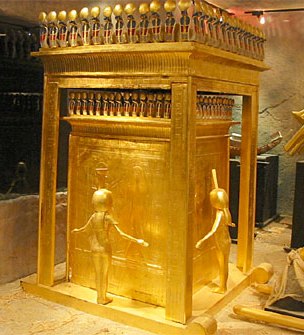 The Hebrews were a materially poor community, slaves only recently liberated from Egypt. Even in the 10th century BC, they could not have had the wealth and the technical skills needed for something like this.

Many scholars regard the descriptions as an ideal picture drawn by later priestly writers. Why would they do this? To serve as a model for the Temple before it was built, and based on what actually existed in Solomon’s Temple.

It’s more probable they used the Temple of Solomon as a model for imaginative descriptions of the earlier Tabernacle.

This is especially true in the description of the altars. Why?

Many of the other items mentioned in the priestly description of Exodus 25-31 and 35-39 cannot be ﬁtted into any realistic picture of a portable shrine – such as the Mosaic Tent and Ark which travelled in front of Israel (Numbers 10:35-36).

Instead, it seems more likely that the desert sanctuary was conceived as a collapsible version of the Temple of Jerusalem, measuring exactly half as long as that structure, but keeping the tradition that God‘s earthly dwelling was a ‘Tent’.

Archaeology of the Tabernacle

What did this Tent look like? Perhaps something like the bas relief on the Temple of Bel at Palmyra (Tadmor), dating to between the 3rd and lst centuries BC and showing a portable tent shrine (see below). 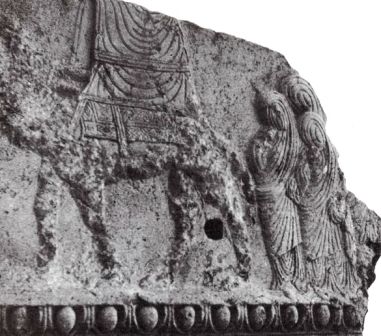 Bas relief on the Temple of Bel at Palmyra

This, again, is very like the pre-Islamic ‘qubbah’, a big red leather tent with a domed top in which the sacred objects of the tribe were housed. It accompanied the tribe into battle and was believed to guide them during periods of wanderings – just as the Tabernacle did.

Raiders of the Lost Ark – Hollywood’s idea of the Ark