The Temple of Solomon – Bible Archaeology

The Temple of Solomon 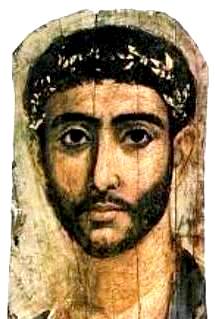 After King David captured the hill fortress of Jebus/Jerusalem, the Ark of the Covenant was installed in a sanctuary on the Temple Mount.

It was there that David’s son Solomon constructed the First Temple, completed in 957BC.

The building was not large. It had three rooms: a porch, the main room, and the Holy of Holies where the Ark was kept. Store-rooms surrounded three sides of the Temple.

This Temple was destroyed by Nebuchadnezzar of Babylon in 586BC. The Temple treasures, including the Ark, were lost forever. 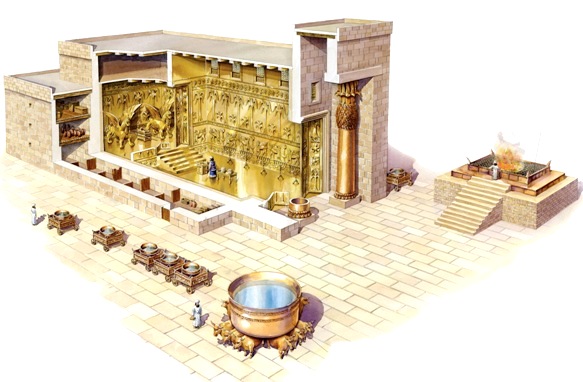 An artist’s impression of the Temple of Solomon. Judging by temples in neighbouring cities like Hazor, the reality was more modest than this.

What’s the evidence? How do we know?

The first Temple in Jerusalem is described in three passages in the Old Testament:

Unfortunately, the only information we have comes from the Bible texts. Nothing remains of the actual building itself. 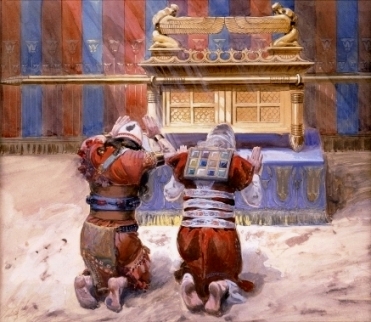 Priests pray before the Ark of the Covenant, James Tissot

The first two descriptions in the Bible are relatively the same, though Chronicles gives more details than Kings.

Opinions are divided as to the description in Ezekiel chapter 41. Is  it accurate? No-one knows. See a YouTube reconstruction of Ezekiel’s vision.

Where was Solomon’s Temple? 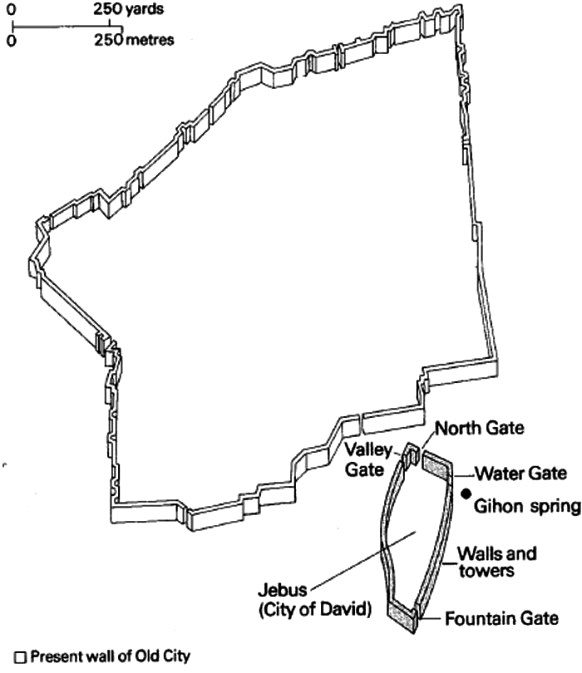 An outline map of the small fortress of Jebus (Jerusalem) with the large rock platform to its  north. It was on this platform that the Temple was built. 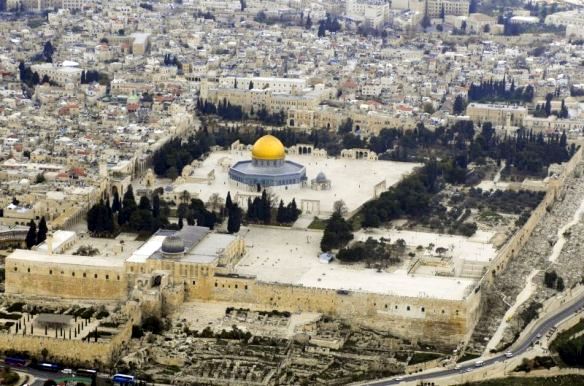 The site of the Temple was on that part of the eastern hill of Jerusalem now occupied by the large platform (35 acres) known as the Haram-es-Sharif.

A large number of scholars place the Temple close to the sacred rock (see below) which is enclosed in the Dome of the Rock. 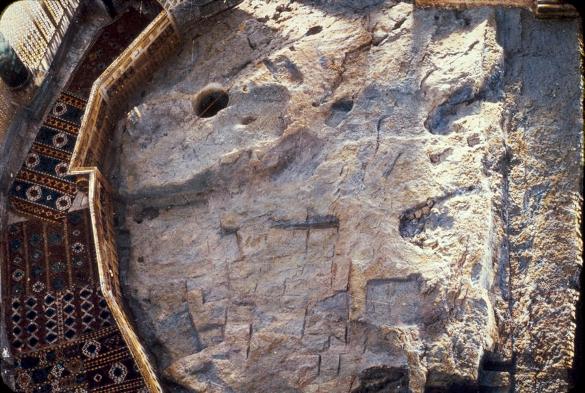 The sacred rock enclosed within the Dome of the Rock.
This is said to be the actual site of Solomon’s Temple.

Theory 1: The rock (above) may have been the site of the altar of burnt offerings identified by I Chronicles 22:1 as the threshing floor of Ornan. This would locate the Temple west of this rock.

The problem with this view is that the hill slopes away steeply from the rock, requiring the elevated Holy of Holies to be supported by an enormous substratum.

Theory 2: Another theory (confirmed to some extent by a rabbinical tradition that the surface of the rock broke through to the debir) places the great altar over the rock.

According to the Bible, the construction of Solomon’s Temple took seven years, from the 5th to the 11th years of his reign (I Kings 6:37-38).

The design of Solomon’s Temple

As far as we can tell, the Temple was an oblong structure consisting of three parts: 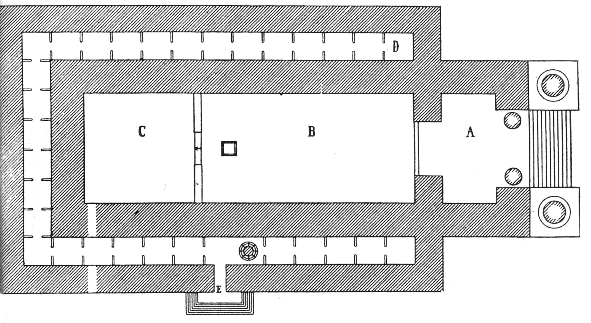 These sections stood one behind the other in a straight line. The whole Temple was laid out with an east west orientation, the ulam or outer hall facing east.

The Temple was constructed of 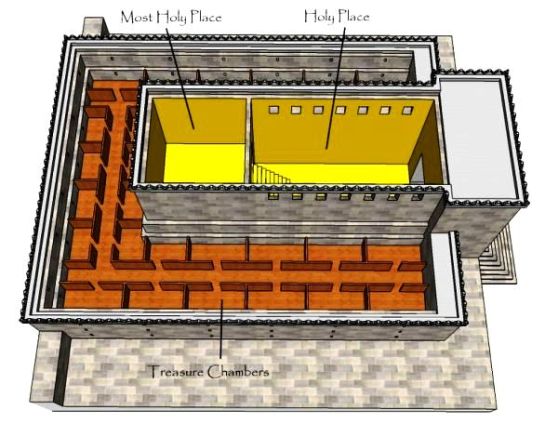 Cutaway model of the ulam (vestibule), the hekhal, and the debir

The four sections of the Temple

The Ulam – a vestibule

This was the outer hall, which served as a vestibule, and was designed as a barrier between the secular and the sacred portions of the sanctuary. It was about 10 cubits long and 20 cubits wide (the cubit is approximately 0.45m. or 1.5ft.).

The entrance door was in its broad side, and was 14 cubits wide. The entrance faced the rising sun, and was flanked by the two free-standing pillars, Jachin and Boaz.

The word hekhal  is derived from a Mesopotamian term, ekallu, a temple or sanctuary.

From the ulam, a cypress door 10 cubits wide led into the hekhal. Both ulam and hekhal are treated as one whole (I Kings 6:2). Properly speaking, they formed the ‘house’ or Temple.

The hekhal was by far the largest room in the Temple, and was 40 cubits long, 20 cubits wide and 30 cubits high. It was dimly lit by latticed windows, and had wide openings which narrowed towards the interior.

The Debir or Holy of Holies 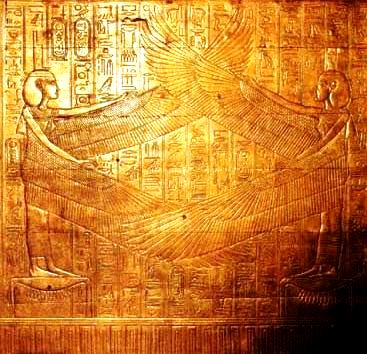 Gold figures resembling cherubim, found in the Tomb of Tutankhamun

The third and inner section was the Holy of Holies. The room, measuring 20 cubits in each dimension, was designed to hold the Ark of the Covenant and the Cherubim.

According to Isaiah 6:1 its floor level was higher than the rest of the Temple and it was windowless.

A flight of stairs led to the Debir from the hekhal, and it was entered through a door 6 cubits wide. Some scholars believe that it was separated from the hekhal by a thin wall (Ezekiel 41:3) or by a veil.

The ‘yatzia’ was an exterior building buttressing the sanctuary, and surrounding the Temple on three sides (except the ulam and the facade).

It had three very low storeys, each storey a cubit wider than the one below. Thus the bottom one was 5 cubits wide, the second 6 cubits, and the third seven cubits. The total height of the yatzia was only 15 cubits, so it was lower than the central building.

Every floor had about 30 vaults, in which were kept all the vessels and instruments employed in the sacrificial rites and other objects which were not in regular use, as well as the gifts to the Temple. See the diagram above.

Dimensions of the Temple buildings

The total length of the Temple has been reckoned as 100 cubits, and its width as 50 cubits. The proportion between length and width was 2:1, a common measurement in temples of the ancient Near East.

There was also a set proportion between the doors, which became narrower as one penetrated inward: the outer door was 14 cubits wide, the middle door 10 cubits, and the inside door 6 cubits.

There were two altars in the Jerusalem Temple. 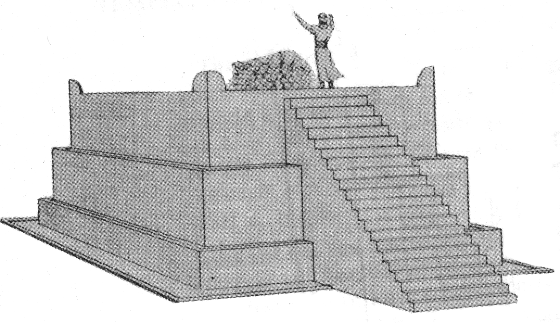 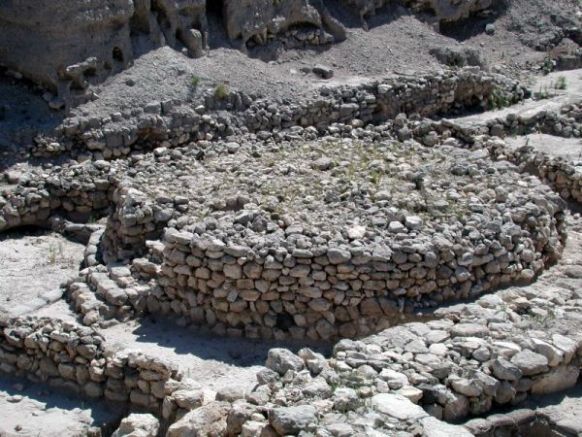 The foundation or lowest stage was named ‘Bosom of the Earth’ and the uppermost ‘Har’el’, meaning ‘mountain of God’, a remnant of cosmic symbolism, possibly influenced by foreign concepts which regarded the temple as the microcosm of the world – hence the extraordinary importance of the altar in later religions. 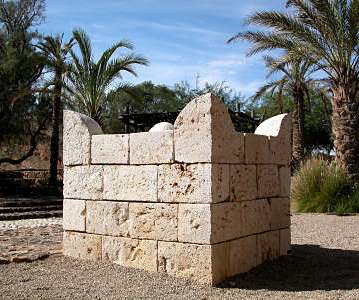 The reconstructed horned altar found at the northern city of Dan

At the four corners of Har’el were affixed four horns, the use of which is not quite clear.

Similar horns were discovered in large numbers on top of limestone incense altars at Megiddo, Gezer and other places – see the one found in the northern city of Dan, at right.

The “Sea of Bronze”

In the courtyard south east of the Temple stood a large bronze bowl ‘wrought like the brim of a cup, like the flower of a lily’. It was held up by four groups of sculptured bulls, three bulls in each group. 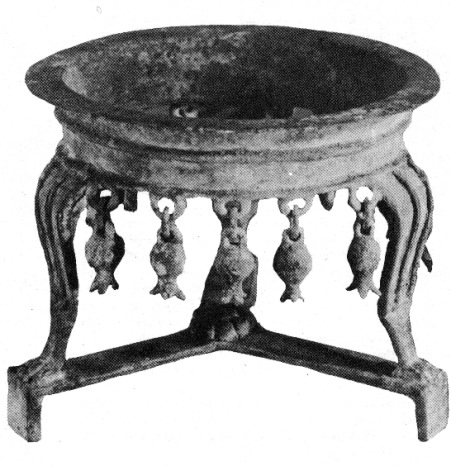 The best parallels which have been found are the basins excavated in Megiddo, and in Amathonte in Cyprus – see the picture above.

The Bible also mentions ten wheeled pedestals, each supporting a bronze laver used to wash the sacrificial victims. Such pedestals have also been found in Cyprus and Megiddo.

In front of the Temple, before the vestibule, were two bronze columns called Jachin and Boaz.

The Bible describes them thus:

Thus the pillars were

Scholars suggest the columns at the front of Solomon’s Temple were traditional ‘mazebot’ – sacred pillars which always had a place in the  Canaanite sanctuaries.

The name of the columns remains a riddle.

How and where the plan of the Temple originated is not known for certain, but it probably came from Phoenicia, the home of the Temple’s artisans and builders.

The tripartite division into ulam, hechal and debir was very common among the Canaanites in the pre-Israelite period.

Several recently discovered sanctuaries follow the plan of the rooms standing one behind the other in a line (see image below).

A Prototype in Hazor

Another temple, somewhat better preserved than the others, has been uncovered at Hazor.

This temple (below) also contained three rooms, each leading into another, and its general plan was almost identical with that of Solomon’s Temple. It dates from the Late Bronze Age (13th century BC), thus preceding the Jerusalem temple.

This may well have been the prototype of the Temple of Solomon. 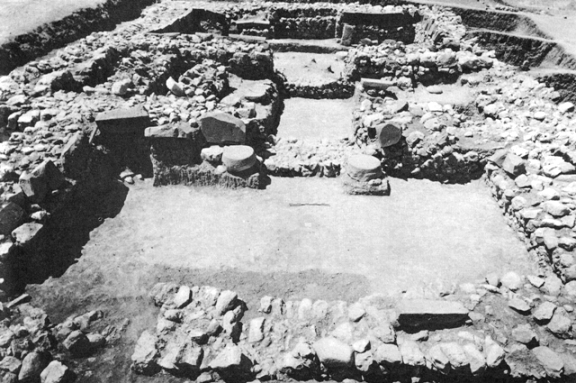 The Temple at Hazor.
The outline of three rooms of descending sizes is clearly visible.

Seat of the Divine Presence

Solomon’s Temple, like other temples in the ancient Near East, was intended for ritual purposes. Only those who belonged to the priestly order were allowed-within its precincts. The lay worshipper could not enter the Temple.

In this respect, it was quite different from the synagogues and Christian churches which replaced it.

Though the Temple was erected primarily as a royal chapel adjoining the king’s palace (a common practice in the Near East), it had national significance throughout its history, even though during the Divided Monarchy rival shrines existed in Bethel and Dan.

On several occasions the vessels and equipment of the Temple were stolen by conquerors or surrendered as tribute. Only after the fall of the Northern Kingdom and the reforms of Hezekiah and Josiah did the Temple assume paramount importance as the religious and symbolic focus of the nation.