What work would you do? 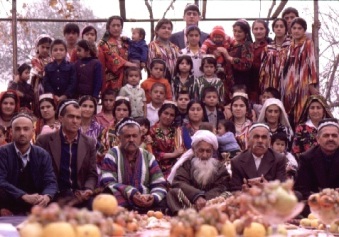 Work, especially food production, was necessary for survival. Everyone worked.

Where did they work? Most of the population worked in their village or on the land around it – even children worked beside their parents in the fields and in the home.

There were tasks for every month of the year – you can see this by looking at the Gezer Calendar at Farming in the ancient world. But work of any kind was forbidden on the Sabbath, which was a day set aside for God.

Jesus’ parables are filled with references to farming and working on the land. He was a villager, a country man, and he knew what it was like to work. 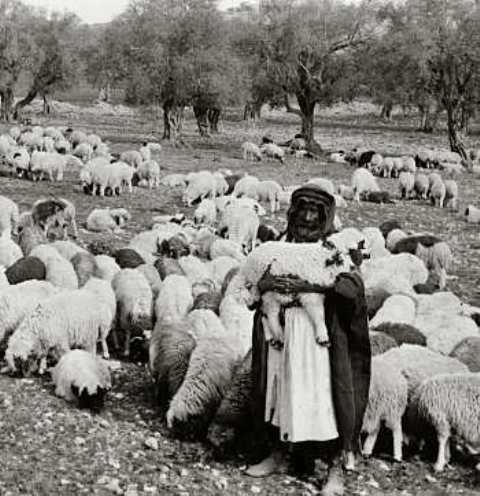 The life of a shepherd was a lonely one, and it could be dangerous as well. He led the sheep and goats, who were always herded together, to an area where they could get food and water. He knew each one of the animals, and watched over them night and day. For all these reasons, Jesus was portrayed as the Good Shepherd.

A shepherd carried a staff, which was a curved piece of wood, usually a sapling, with a piece of side-growth that formed a V-shape suitable for hooking an animal by its leg.

He was also armed with a wooden club. This was to defend himself and his animals against beasts of prey on the look-out for a meal – this could be wolves and hyenas, jackals, or even in the early period lions and bears.

He also had to contend with human animals of prey – thieves who sought to relieve him of some of his herd. 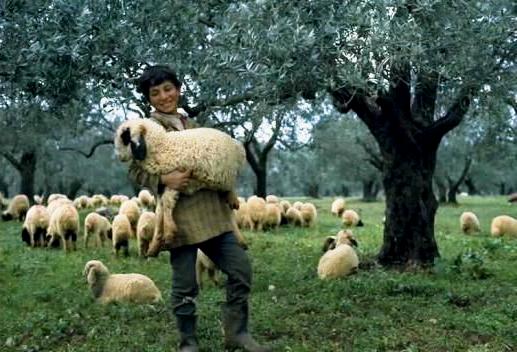 The shepherd had to give an accounting for every animal in his care. 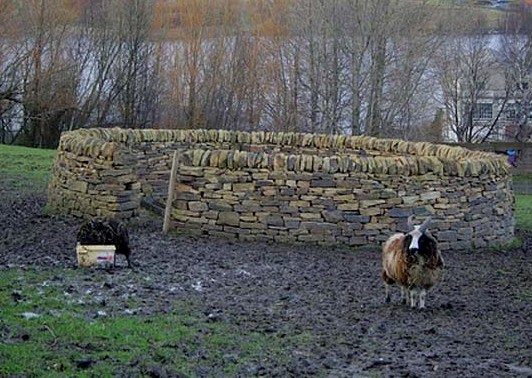 A sheep-fold provides warmth and protection for sheep during the night, or in a storm

At night, animals were kept in a sheep-fold – an enclosure with a circular stone wall and one small entrance, just wide enough for one animal to pass through.

At night, when the animals were inside the enclosure, the shepherd was expected to sleep lying across the entrance, his body providing a gate for the enclosure so that nothing could get in or out.

Fishing is only mentioned sporadically in the Old Testament, perhaps because the writers were Jerusalem-based, and fishing was not an important industry there.

However, there were many towns clustered around the Sea of Galilee in the north, and a flourishing fishing industry there. The New Testament describes fishing as a normal industry employing many people.

This meant they did all the normal tasks of a fisherman: 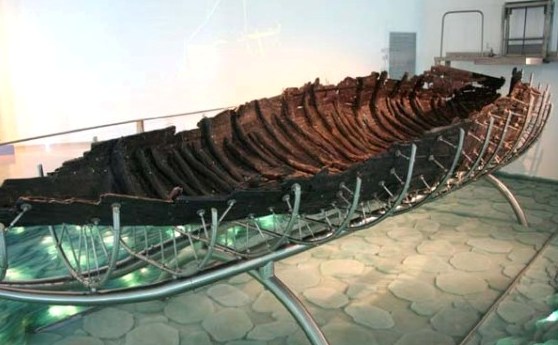 The carefully preserved remains of an ancient boat dating back to the 1st century AD, discovered buried in mud near the town of Magdala on the Sea of Galilee 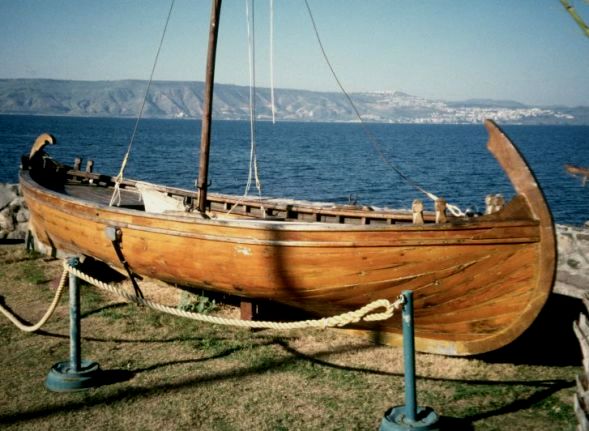 A modern reconstruction of the boat, as it would have looked at the time of Jesus

We can get a good idea of the sort of boat they used from the ancient boat dated back to the 1st century AD, discovered buried in mud near the town of Magdala. This boat is nine meters in length and two and a half meters wide.

Fishermen used bone or iron fish-hooks, though fishing by hand was not much in use since it only yielded a small amount of fish.

In New Testament times there were two kinds of net in use.

Cloth was made from flax (linen), and wool (from sheep and goats). Sheep were shorn in the spring, when the weather began to warm up.

The fleece was washed, and dried in the sun. Then it was combed and spun into yarn, using a simple hand spindle made of stone or clay. 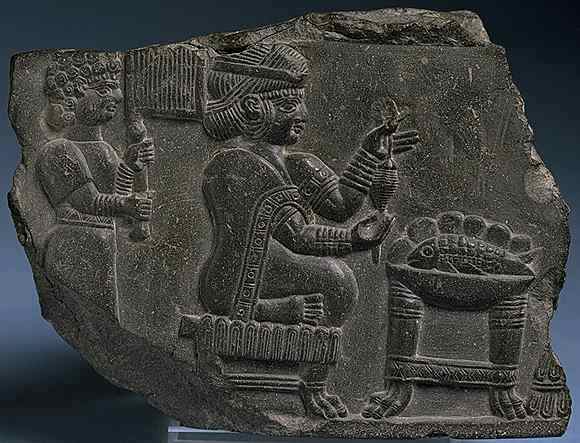 This unusual wall relief is from the ancient city of Susa

Spinning thread was a valued skill, even among wealthy women. It was a sign of respectability and dignity to be seen at your loom.
The looms could be vertical or horizontal, but vertical ones seem to have been favored.

The weaver stood in front of the vertical loom – the threads were held taut by the stone or clay weights, and the weaver could make quite large pieces of cloth, or even the large strips of thick coarse cloth used for tents.

Processing the flax for making linen was a complicated process.

The strips of flax were often dried on the flat rooftops (see the story of Rahab the prostitute, who hid spies from the soldiers by throwing bundles of flax over them, Joshua 2:6).

When they were completed, the strips of cloth might be dyed – the colors were mostly from vegetable dyes, but costly purple could be made from the crushed shells of mollusks. There were a variety of colors used:

Even the poorest Jewish women used vegetable dyes to get a range of colors for the family’s woolen clothes.

Women were largely responsible for production of clothing in all stages of manufacture. They

The Israelites were not, at first, great builders. They preferred the mobility of living in tents, and many did not wish to live in settlements as the Canaanites did.

In fact, the story of Cain and Abel – brother kills brother, is about the conflict between the two different ways of life – settled village life that depended on agriculture, and nomadic life that focused on the flocks of animals that sustained a clan/tribe.

Gradually, however, they adapted to the settled life of farming and agriculture. This of course did not come without certain disadvantages – kings and taxes probably being the worst of these.

King Solomon had an ambitious building program, but he lacked the skilled craftsmen he needed. So he imported Phoenician masons and joiners to produce top quality work for the Temple and Palace he built in Jerusalem. 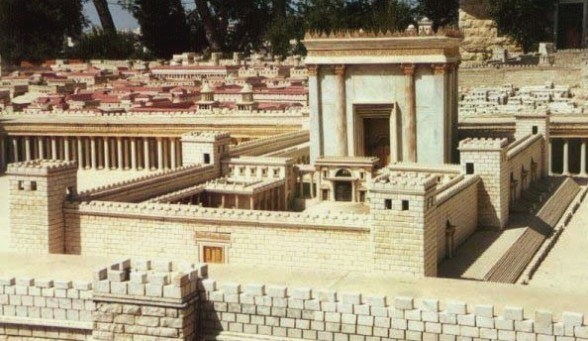 No expense was spared for public buildings, especially in Jerusalem.
The reconstruction above shows the Temple, and behind it administrative palaces/public buildings and houses for the high priests and government officials

A thousand years later, King Herod the Great did much the same, on a more impressive scale.

The town of Sepphoris, just a few miles from Nazareth, was built in this period. Probably Joseph and possibly even Jesus of Nazareth were builders on this site. 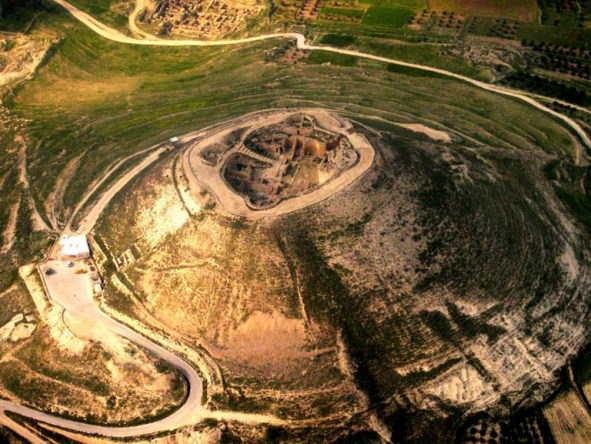 The hill on which the fortress of Herodium sits was largely man-made, constructed by the builders of Herod the Great without any earth-moving machinery

Many villages had cisterns hollowed out underneath the houses, to store rain water. These were excavated from the solid rock then lined with slaked lime to prevent water leakage.

Animals were also housed in cavities cut out of the stone – a space like this, rather than a stable, would have been the birth  place of Jesus.

Farming was the main work of the Israelites, necessary for their survival – without it they would have starved to death.

Farming methods evolved over the period of Israelite settlement.

When they first entered Canaan, the land was already occupied by the Canaanites. The Hebrew/Israelite tribesmen could only use the inhospitable hill country, which meant back-breaking work.

Later in their history they were they able to use the rich plains of the valley land (see photograph of farming on the Plain of Jezreel below) for intensive farming. 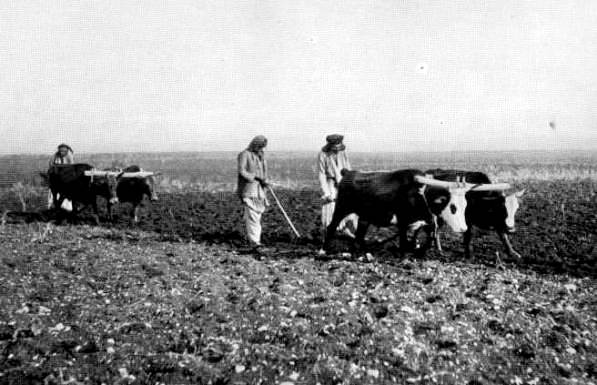 Ploughing in the Plain of Jezreel, from a 1925 photograph

Olives were picked in September through until November. In earlier times, they were then placed in open stone vats and pounded with a pestle. 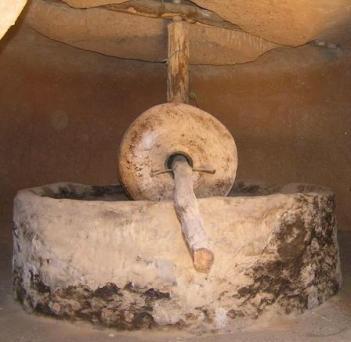 Another method was to place the olives on a grooved circular stone with another stone on top; this second stone could be rotated, to press the pulp down and force the oil out (see right).

Later still, a millstone olive press was developed (see below). The olives were places in a stone sink or bowl, given an initial pounding, then a large stone was placed on top of them.

Additional stone weights were loaded onto one end of a beam fixed in a wall, and the full weight of all this stone flattened the fruit and forced the oil from the olives. 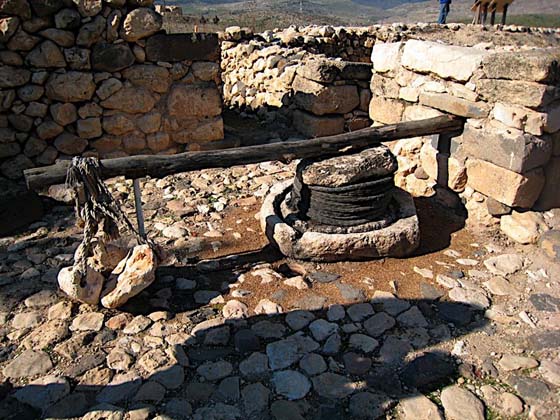 Photograph of a reconstructed oil press excavated at ancient Hazor A miller with grain shute and grinding stone,
from an early photograph

When the grain had been winnowed, it had to be ground to separate the hard outer shell from the flour.

In earlier times, and in many small communities, this work was done by women. They ground the grain into course flour using a pestle and mortar before preparing the dough and baking it.

In later periods this task was done on a larger scale, usually by men using special equipment to produce a large quantity of flour.
The 1937 photograph above, while obviously taken at a much later period, shows the sort of milling equipment that has been in use for many centuries in Bible lands. 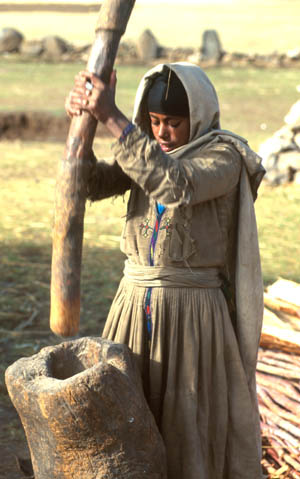 People will tell you that ancient women worked at their looms and their kitchens, and that was about all. Nothing could be further from the truth. We know they did many other forms of work.

You can get an idea of these tasks by reading Proverbs 31:10-31,  a poem describing the ‘Woman of Worth’. This poem lists all the tasks a woman should, ideally, perform. They included: 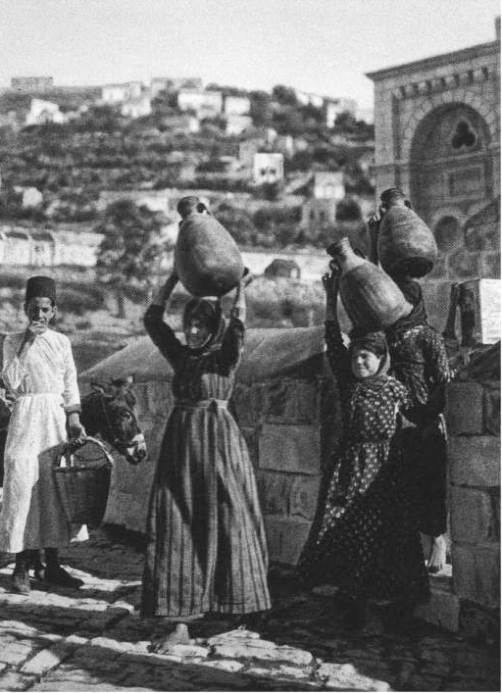 You will notice that the list hardly mentions children. This is not because children were unimportant – in fact, quite the reverse. It was taken for granted that children were the central concern of a woman’s life. Children were the great blessing given by God, and not having children was counted as a very great misfortune.

The tasks listed in Proverbs 31 were those of the main woman of the house, but there were many lesser tasks that women and girls were expected to perform.
As well as working in the fields alongside the men, they were expected to 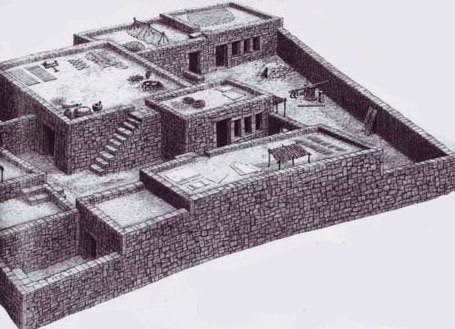 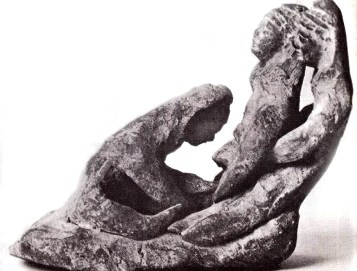 Hebrew women gave birth in their own tents or houses. During labor they were surrounded by other women: a midwife, their relatives and friends, and female servants of the family. They would certainly have seen other women give birth, so they knew what to expect and what to do.

Hebrew women gave birth in a squatting position, above a hole hollowed out of the ground. On either side of the hole were bricks or stones for the woman to stand on. She was supported at her back and under her arms by other women, either midwives or family members.

As soon as the baby was born its umbilical cord was cut, then it was washed and wrapped in long bands of cloth (swaddling bands) which held the limbs of the baby firmly, though not tightly.

Midwives were highly skilled. Giving birth could be a dangerous business, and mothers sometimes died. But the Book of Genesis describes a difficult birth when Tamar has her twin sons, and is helped by the midwife’s skill.

It was the women’s task to prepare a dead body for burial. 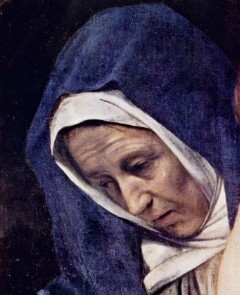 Tombs were visited and watched for three days by family members.

On the third day after death, the body was examined. This was to make sure that the person was really dead, for accidental burial of someone still living could occur.

On these occasions, the body would be treated by the women of the family with oils and perfumes – see

Food in
the ancient world

Slaves in
the ancient world