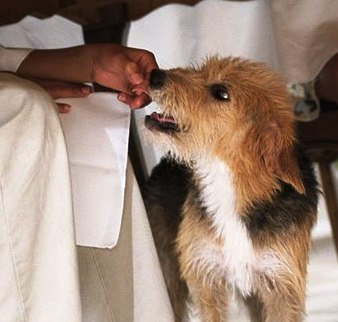 ‘Lord, yet even the dogs eat the crumbs that fall from their masters’ table’: the Canaanite woman in the gospels

Here’s an odd thing. Dogs are mentioned many times in the Bible, but cats are ignored.

Why? Because in the ancient world dogs were common, and useful.

Cats were merely decorative – and there was not much scope for the decorative in biblical times. Life was pared back to the essentials. Cats, too, were associated with Egypt, and Egypt was an enemy of the ancient Israelites.

There were packs of wild dogs roaming the countryside and the city streets. Nobody owned them – they were scavengers, and probably still had a fair amount of wolf in their genetic make-up.

No doubt they were driven out beyond the city gates now and then, but returned. They mostly lived off the rubbish dumps outside the city walls, where they could find scraps of food.

Dogs in the Bible: Wild dog eating a human corpse; this was the fate of Jezebel

They became so fierce and savage that Israel’s enemies were poetically called ‘dogs’ as a term of abuse.

It was because of this type of dog that the Bible had such a low opinion of dogs in general.

Here are some Bible-era descriptions of dogs: 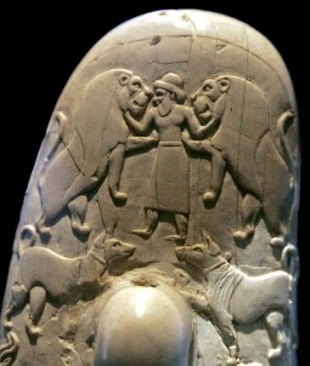 Dogs in the Bible: Knife handle excavated from Gebel-el-Arak; these royal hunting dogs could easily take down a lion

Hunting dogs for the rich

Hunting was considered a suitable pastime for the nobility, a test of endurance and courage, so every ruler or governor of any importance kept a pack of hunting dogs. 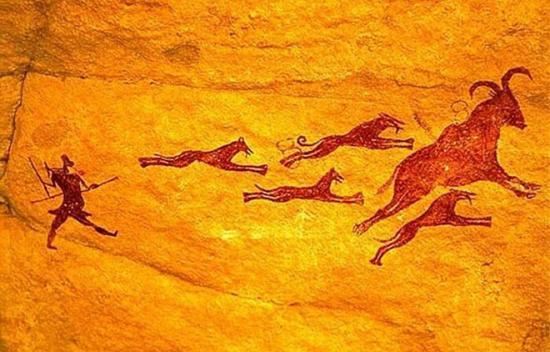 These dogs were much better treated than wild dogs, with regular food and exercise, and were specially bred to have 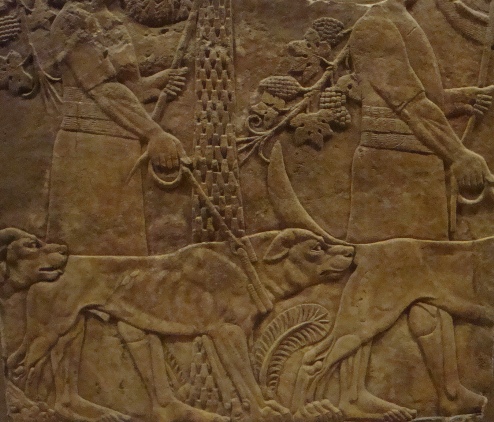 Dogs in the Bible: Assyrian hunting dogs; the kings of Israel and Judah may have had dogs like these

House dogs for everyone

These were more like the good-natured domesticated dogs we know today – but they were probably not as well treated. 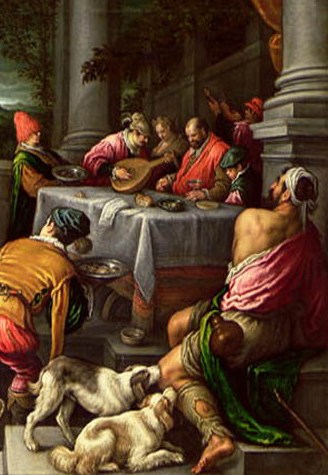 Dogs in the Bible: Lazarus and the rich man: the dogs lick the sores of Lazarus

‘There was a rich man who was dressed in purple and fine linen and who feasted sumptuously every day. And at his gate lay a poor man named Lazarus, covered with sores, who longed to satisfy his hunger with what fell from the rich man’s table; even the dogs would come and lick his sores…’ Luke 16:19-21

‘But the Canaanite woman came and knelt before Jesus, saying “Lord held me”. He answered “It is not fair to take the children’s food and throw it to the dogs.” She said “Yes, Lord, yet even the dogs eat the crumbs that fall from their masters’ table.” Matthew 15:25-27

It seems that dogs were allowed to come inside the house at times, and may even have been pets. The dog mentioned by the Canaanite woman (above) is inside, and allowed to come near enough to the eating area to pick up morsels of food from the floor or from the people around the table – much as a modern dog will do.

There is one instance where a dog behaves like a modern pet – in the Book of Tobit.

Tobit’s son sets out on a long journey, unaware that his fellow traveller is the angel Raphael.

As they leave, the family dog tags along behind them, and stays with them all through the journey. When they return the dog returns with them.

‘The boy and the angel left the house together, and the dog came out with him and accompanied them.(Tobit 6.1)
‘When they reached Caserin close to Ninevah … The dog went with the angel and Tobias, following at their heels.’ (Tobit 11.2,4)

There are echoes of this story in the modern film “Michael”. 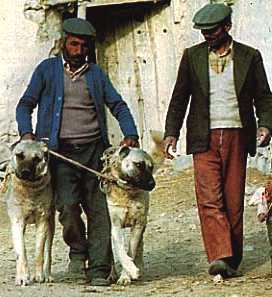 Dogs in the Bible: Kangal dogs used to guard sheep and goat herds and protect them from predators such as wolves and jackals

Work dogs were the unsung heroes of the ancient world.

‘In that region there were shepherds living in the fields, keeping watch over their flock by night. Then an angel of the Lord shone around them, and they were terrified. But the angel said to them “Do not be afraid.” Luke 2:8-10

Without these work dogs, herding of sheep and goats would have been impossible – and the development of civilization might have taken much longer.

Work dogs were selected for

They were probably similar to the Saluki and Kurdish/Turkish herding dog. The latter is a large breed like a mastiff, or like war dogs in Babylonian wall reliefs in about 2,200BC (see photograph above). 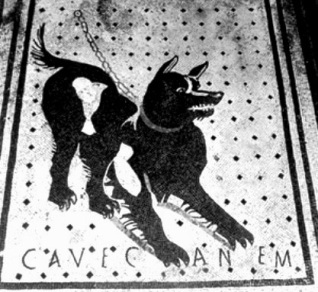 Dogs in the Bible: Cave canum: beware of the dog; pavement excavated in Pompeii

Dogs were frequently mentioned in the Bible.

On the other hand, there were numerous troops of wild, masterless dogs living off the city rubbish dumps. They became so fierce and disliked that cruel enemies were poetically called ‘dogs’.

The dog was an unclean animal; it could not be eaten. Despite its usefulness, its name was used as a reproach. 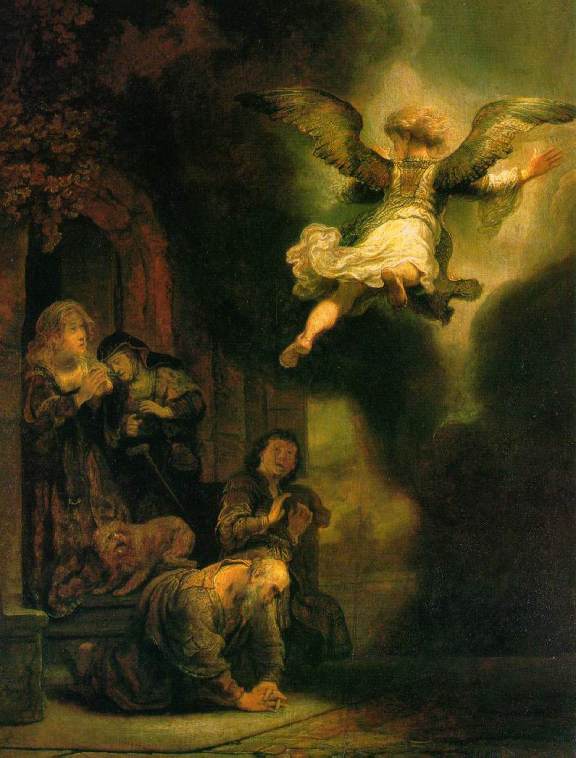 The Archangel leaving the family of Tobias
Rembrandt van Rijn

Dogs in the Bible – links

Shepherds (and their dogs?) at Jesus’ birth

Jehu said “Throw her (Jezebel) down”. So they threw her down; some of her blood spattered on the wall and on the horses, which trampled her. Jehu said “This is the word of the Lord, who said that the dogs shall eat the flesh of Jezebel”.

Dogs in ancient Egypt were similar to these modern breeds