What’s the Book of Joshua about?

Book of Joshua: settling in a new land

Joshua led them in this dangerous and exhausting journey.

What dangers did they face?

Unfortunately, the land they wanted was not empty. It was already occupied by a thriving population, so the Book of Joshua Chapters 1-12 is mostly a narrative about wars, skirmishes and guerilla warfare.

Who were the ‘people of Israel’?

They were not a single group all descended from former Egyptian slaves – as Hollywood would have us believe. Chapters 13-22 lists ‘the people of Israel’, giving a powerful sense of the diversity in this supposedly single group.

The Covenant ceremony at Shechem included ‘all Israel, foreigners with the native-born’ (8:33) and alliances were made with people already living in Canaan (2:1-14, 6:22-25).

The challenge Joshua faced was to forge these groups into a single unified nation. He has high hopes. He sees Israel as a sort of alternative kingdom governed by the laws of Yahweh.

How does the Book of Joshua end?

It ends with Joshua’s death – just as Deuteronomy ended with the death of Moses. 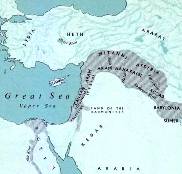