Marriage in the Bible

One or two wives? Or more?  The pros and cons of polygamy –
see the stories of Sarah, Rachel and Rebecca.

Polygamy was common in the time of the Patriarchs and Matriarchs, but common sense tells us that at any given time most of the people must have been monogamous. 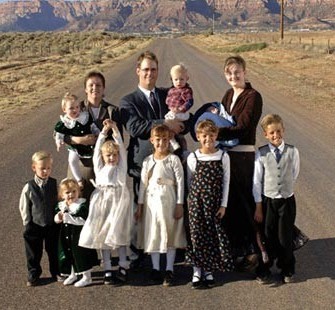 Marriage in the Bible:
a polygamous family today

This did not include kings, who made many marriages for political reasons. Solomon’s ‘thousand wives’ (surely an exaggeration, poor man?) cemented political alliances with neighboring states and countries.

Two wives, or one?

The average Israelite polygamous family was quite different. It probably included only two wives, if one of them could not have children – if she was barren. This may have happened more often than now because most people were closely related to their marriage partners, over many generations, and this may have affected the fertility of the women.

When this happened, the law allowed a man to take a second wife so that the family could have an heir. Of course, rich men probably took advantage of the situation to marry several wives simply because they wanted to, and were able to do so. David certainly did. 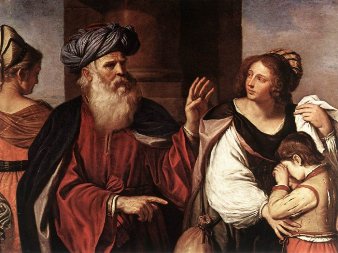 Abraham expels Hagar and Ishmael
from the tribe

Abraham had only one wife, Sarah. They loved each other, but she could not have children. So she gave her Egyptian slave Hagar to Abraham, to be his secondary wife and give him a son – read Hagar’s story. Eventually, on Sarah’s orders, Abraham expelled Hagar from the tribe – the primary wife ruled the other women of the tribe, so Sarah could insist that this be done – which she did.

Feminist writers have portrayed Hagar as a victim, but by the standards of the time she was not. If she conceived and became the mother of the next tribal leader, heir to Abraham, she became the ruler of all the women in the tribe, and there was a vast improvement in her social situation. As it happens, Sarah was able to drive her and her son away from the tribe before Abraham died, so Hagar never lived her dream.

The story of poor, lovely Rachel and her older sister, the under-appreciated Leah, has the same scenario. They give their servants Bilhah and Zilpah to Jacob, for the same reason.

The Code of Hammurabi

The stories of Sarah and Hagar, and of Rachel and Leah, are not just random stories that happen to be in the Bible. Each of them illustrates a law from the Code of Hammurabi, which was set in place circa 1700 BC.

Clause 145 of the Code allows a man to take a second wife if his first wife is barren, or permits the barren wife to give her husband a concubine (a wife of secondary status) to bear him children.

Not only that. Clause 146 gives the wife the right to punish the handmaid in circumstances similar to those described in Genesis 16, where Sarah arranges for Hagar to be banished into the desert – a virtual death sentence.

So the stories in Genesis, used for centuries by the Jewish people as guides for daily life, were selected because they illustrated specific clauses in the Code of Hammurabi. The Hebrews, who mostly did not read or write at this time, preserved complex legal codes in their oral story-telling.

One last word: read Proverbs 31 for a description of The Perfect Wife. The passage implies that any man who has a jewel like this should need nothing more.

Choosing a husband or wife

This is no specific information in the Bible about the age at which one should marry, but it seems that both girls and boys married very young by our standards. In later Jewish history, the rabbis fixed the minimum age for marriage at 12 for girls (who matured earlier than modern girls) and 13 for boys. 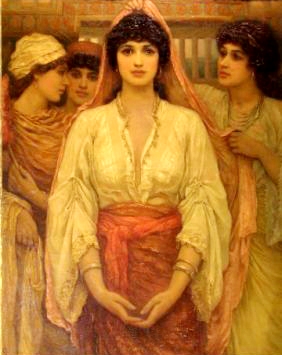 In these circumstances, it is not surprising that parents decided on a suitable marriage partner for their child – though the story of feisty Rebecca shows she was consulted before the decision was finalised. See Rebecca’s story.

In the unsafe world of the Old Testament, a family needed as many men and boys as it could support

Bible Study Resource for Bible Women
One wife or two? Code of Hammurabi, choosing a husband or wife

Major events
in a woman’s life