Nehemiah is a companion book to the Book of Ezra. It tells the story of God’s people, as they rebuilt Jerusalem.

Nehemiah is the leader of this mammoth project. 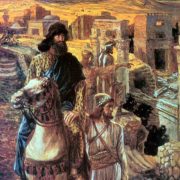 There is opposition from surrounding countries to the rebuilding of Jerusalem’s walls. Why? A strong Jerusalem will be a threat to its neighbours.

But after fifty-two days of strenuous work, the mighty wall is finished, and the people celebrate.

What is the first thing Ezra does? He reads the books of the Law to all the people. Keeping this Law and staying separate from other peoples will preserve the Jewish race and keep it safe.

The Law of the Jewish way of life will be like the wall around Jerusalem, keeping Judaism safe and alive.

Background to the Book of Nehemiah

The great and mighty Babylonian Empire was finally overthrown by the Medes and Persians when Babylon fell in 539BC. Cyrus, the Persian king, strategized by reversing the tough policies of the Assyrians and Babylonians.

The Jewish captives immediately sprang into action: a prince of the Davidic line led them in returning to Jerusalem in 538BC.

Maps of Jerusalem
through the centuries