The statue of unloved but fertile Leah, by Michelangelo

Look at the body language in Michelangelo’s statues of Rachel and Leah, two of the wives of Jacob. The virtuous and fully robed Rachel (below) may be dressed in clothes that resemble a nun’s habit, but Leah (right) is definitely not. Her clothes are modest enough, but they reveal the curves of her body.

This is a seductive woman, sure of her own sexual power – as well she might be, given the Bible story. Michelangelo’s statue of Leah  is a pointed contrast to the modest, matronly figure of Rachel.

In fact, the overall effect of her draped body and her way of standing remind the viewer of one of those Greek statues of a classical goddess. Michelangelo may have done this deliberately, to suggest a link between the pagan goddesses and Leah’s fecundity.

The young woman gazes wistfully at the mirror adorned with a grotesque mask she holds in her right hand—the Bible says “Leah’s eyes were weak”—while her limp left arm holds a garland. She is all too aware that her looks cannot match those of her younger sister Rachel.

Her braided hair is bound up to create a sort of natural diadem. This effect is heightened by the shell niche that frames and accentuates the beautiful head. One thick tress of hair falls over her right shoulder and trails all the way down to her waist. Pathetically, she has done all she can to make the best of her looks. Alas, it will not be enought to make Jacob love her as she wishes to be loved.

Leah’s long flowing garment has an unusual ornamented bodice and collar, a tightly wrapped horizontal band that accentuates smallish breasts, and loose folds that loop down below her waist. A knot of drapery just in front of her womb evokes her fertility and the six sons she gave Jacob.

According to the Bible, Leah was not as lovely as her sister, but she was favored by God. As though to express the beauty of her inner spirit, and the pathos of her loveless life, Michelangelo has created one of his most majestic and lovely creatures.

It is difficult to see the quiet dignity of these two female figures if you look at them as a group, (see the image below). in Moses is full of dynamism and energy. Half rising from his chair, he seems about to spring forward.

The statues of Rachel and Leah were clearly created as a pair, to flank but not compete with the prophet Moses. Michelangelo purposely created demure, even diminutive females that represent Faith and Good Works, or the active and the contemplative life.

Originally, the figure of Moses was to be flanked on either side by two slaves struggling to free themselves from their bonds, but Pope Julius apparently objected to their writhing bodies, too sensual and therefore unsuitable for a Pope’s tomb.

In substituting the two female figures, Michelangelo turned from exaggerated physicality to spiritual yearning, from pagan to Christian allegory.

We tend to think of Michelangelo’s titanic forms as bursting from their bonds and boundaries.

But these two women quietly encourage us to reflect upon the nature and passage of life, both here and hereafter. Rachel clasps her hands and submits her appeal to God. The drapery modestly clothes yet reveals the subtle turns of her elongated, asymmetrical body.

Moses emerges as the dominant figure, but only because the Jewish nation, his people, have issued from the bodies of these two extraordinary women. 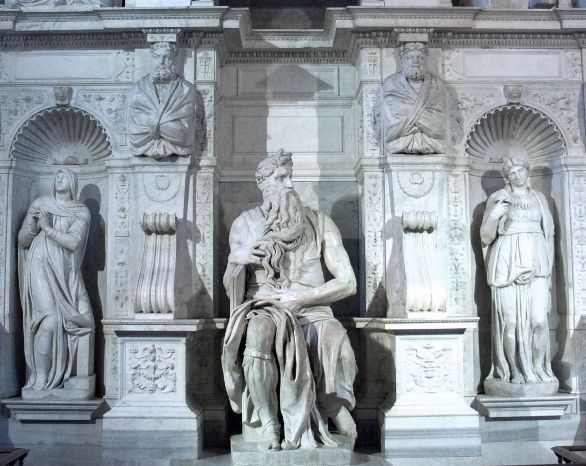