Easter women at the Tomb

Which women were at the tomb on Easter morning?

Why were they there?

In the ancient world it was common for women, usually family members, to wash a corpse and lay the body out for burial. In Jesus’ case, this would have been a difficult task, since his body was heavily matted with dried blood. 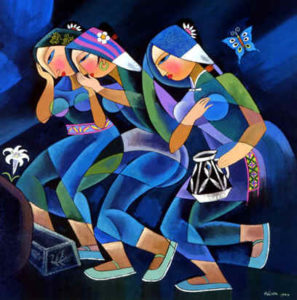 The women intended to use spices and scented water to smooth the congealed blood and grime from the body (not a task for the faint-hearted) then bind the arms and legs so they were held firmly, and wrap the whole body in a long strip of linen cloth – the shroud. There were no undertakers – this was the simple, gentle act performed by women for their family members.

When the frightened women reach the tomb on Easter morning, they were greeted by an unexpected sight. The great stone that should have covered the entrance of the tomb had been rolled sideways so that anyone could enter the tomb.

This was not what they expected. On the evening before the Sabbath, they had placed Jesus’ dead body – they were certain it was dead – on one of the stone slabs inside the tomb, and the entrance to the tomb had been firmly closed. But now the body was missing.

A normal reaction would have been to think that someone had stolen the body – Peter? He had a reckless streak and must have been bitterly ashamed that he had abandoned Jesus when the soldiers came to arrest him.

But the body did not seem to have been stolen by anyone, friend or foe, and the women, frightened, did not know what to do. Then their dilemma was solved. In the place where the women expected to find Jesus’ body, there were instead one (Luke says two) beings whom the gospels call ‘angels’, dressed in the ceremonial white garments associated with heavenly beings.

Think of them not as messengers from God, but as the message itself, given and accepted.

These were sensible older women from various backgrounds, not given to flights of fancy. The idea that someone could be dead and then not dead must have seemed improbable, to say the least. What did ‘risen’ mean anyway? They ran back to the house where many of Jesus’ disciples had gathered.

Of course the men did not believe them. Women’s testimony was not given the same weight in a court of law as men’s was, and no doubt the male disciples thought at this moment that that was a good thing.

What about Mary Magdalene?

Mary Magdalene had not left with the others. When she leaned down to peer through the entrance of the tomb, she saw two ‘angels’ – though what exactly is meant by ‘angels’ is open to debate.

‘Why are you weeping?’ they asked – rather an odd thing to ask in the circumstances – but of course these words are God’s, and they had a special purpose. They were pushing Mary towards a greater truth than the fact that Jesus’ body was missing. 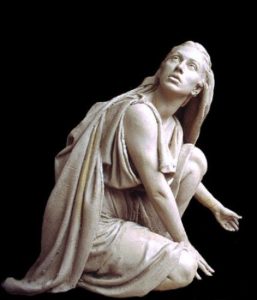 But Mary was submerged in grief. She had fallen into a bent-over position, and when she heard a male voice she did not look at the man but assumed it was a worker in the garden surrounding the tombs. Here might be someone who knew something.

She blurted out a question, but when he answered she did not recognise the voice of Jesus. Only when he said her name, ‘Mary’, did she recognise him. She was overcome with emotion, and grasped hold of him, calling him ‘rabboni’, a Hebrew word meaning ‘teacher’.

Jesus gently disengaged himself from Mary’s grasp. The words he spoke are often translated as ‘Do not touch me’, but a better translation is ‘Do not try to hold onto me. Let me go’. He was no longer as he had been. She must move on.

What does this all mean?

If you think about it, these are the three stages of the beginnings of life:

The empty tomb story in the gospels mirrors the stages of new life.

Think about the scene, and look at the symbolism. When the women arrive at the tomb, it  is an empty dark space, waiting for a human body – much like a womb. Then it has a body in it. Then this body leaves and goes into a new reality – birth and new life.

Before pregnancy, a woman’s womb is an empty space – as the tomb of Jesus is new, empty. Then the womb/tomb is filled with life.  Then the new life of a child makes its journey from one world to another.

The tomb is a life-giving womb for humanity.