Murder in the Bible

Benjamin. His father was Gera the Benjamite.
Eglon was the enormously fat king of Moab, a neighbouring territory

The story of Ehud has three parts:

As my grandmother would have said, this is not the sort of story you expect to find in the Bible!  It is gross and funny – and very popular among the Hebrew people who suffered under their Moabite overlords. 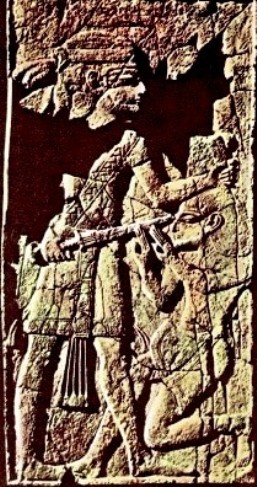 Why? Because it showed that brains were better than brawn. One man with courage and audacity could demolish an enemy king.

Ehud, the hero of the story, was a shining example of what the Israelites did best: adapting to a situation and making the most of what they had.

No wonder he was a hero to his people.

Ehud and the Moabite king Eglon

Ehud decided to assassinate King Eglon of Moab, rather than pay tribute. He made a double-edged sword, sharp on both edges. This was unusual for that time since most swords were curved, with only one sharp edge.

Because he was left-handed, he fastened his sword directly onto his right thigh instead of his left, hiding it under his clothes.

Then he went to deliver tribute to Eglon – conquered people paid onerous taxes to their overlords. He was the leader of the delegation, and his servants carried the booty. Naturally they were all searched for weapons, but Ehud’s sword was not where a sword would normally be, on his left thigh, so it was missed by the guards.

Curved Canaanite sickle sword. This is the type of sword Eglon’s guards would have expected Ehud to carry.

At this point in the story, the Bible makes the point that the king to whom the taxes were being paid, Eglon, was an enormously fat man, not a warrior, not kingly, but a figure of fun.

When the tribute had been presented, Ehud sent away his assistants and asked for a private audience with Eglon. This was granted. All the king’s attendants left.

Alone with the king in a small private chamber, Ehud pulled the sword from its hiding place and thrust it into the fat man’s belly.

He pushed it so deep into the man’s bowels that the hilt of the sword disappeared under folds of flesh. The Bible says that ‘the dirt came out’ – dirt being a euphemism for excrement or faeces. This too is an important point, because it meant the small room stank.

Having done the deed Ehud left, locking the door behind him. Then he left the palace. When King Eglon’s servants came back and found the door locked, they assumed their master was relieving himself – they could smell the faeces.

They waited. And waited. Finally they unlocked the door and found the king, dead on the floor.

But by this time Ehud was long gone.

But the story did not end there. Taking advantage of the confusion his murder had caused, Ehud rallied his people to battle and captured the fords across the Jordan River, killing large numbers of Moabites. Leaderless, they were easy prey. ‘And the land had rest for eighty years’ – which is the Bible equivalent of ‘and they lived happily every after’. 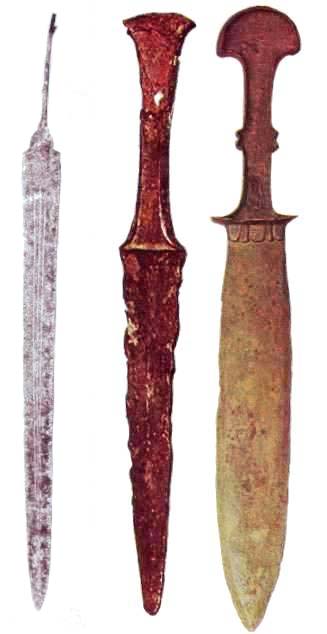 It also stresses the fact that he was left-handed.

Why? Because these details explain the success of Ehud’s key tactical move in managing to gain entrance to the chamber of the King without his guards’ discovering that Ehud was armed.

His sword was short, sharp on both edges like a dagger, and he kept it on his right thigh instead of the usual left. And thrusting it deep so that the haft went after the blade prevented the immediate spurt of blood which might have alerted the guards.

The sword fashioned by Ehud for his mission was very different from the standard sword of the period. The description is clear: it was a two-edged sword, therefore straight, and therefore designed for stabbing.

But the sword of this period in the lands of the Bible was the curved type (see illustration above). The straight sword, brought in by the Sea Peoples, was only beginning to make its appearance at this time.

Had the Biblical report merely mentioned the term “sword” without qualification, it might have been taken to mean the standard sword, which was curved. And with such a weapon Ehud could never have got past the guards.

15 Again the Israelites cried out to the Lord, and he gave them a deliverer—Ehud, a left-handed man, the son of Gera the Benjamite. The Israelites sent him with tribute to Eglon king of Moab.

16 Now Ehud had made a double-edged sword about a cubit (a cubit is about 18 inches) long, which he strapped to his right thigh under his clothing.

17 He presented the tribute to Eglon king of Moab, who was a very fat man. 18 After Ehud had presented the tribute, he sent on their way those who had carried it. 19 But on reaching the stone images near Gilgal he himself went back to Eglon and said, “Your Majesty, I have a secret message for you.”The king said to his attendants, “Leave us!” And they all left.

20 Ehud then approached him while he was sitting alone in the upper room of his palace and said, “I have a message from God for you.” As the king rose from his seat, 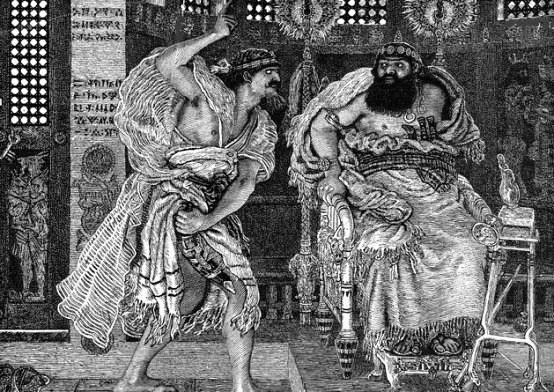 21 Ehud reached with his left hand, drew the sword from his right thigh and plunged it into the king’s belly. 22 Even the handle sank in after the blade, and his bowels discharged. Ehud did not pull the sword out, and the fat closed in over it.

23 Then Ehud went out to the porch; he shut the doors of the upper room behind him and locked them.

24 After he had gone, the servants came and found the doors of the upper room locked. They said, “He must be relieving himself in the inner room of the palace.” 25 They waited to the point of embarrassment, but when he did not open the doors of the room, they took a key and unlocked them. There they saw their lord fallen to the floor, dead.

26 While they waited, Ehud got away. He passed by the stone images and escaped to Seirah. 27 When he arrived there, he blew a trumpet in the hill country of Ephraim, and the Israelites went down with him from the hills, with him leading them. 28 “Follow me,” he ordered, “for the Lord has given Moab, your enemy, into your hands.”

So they followed him down and took possession of the fords of the Jordan that led to Moab; they allowed no one to cross over. 29 At that time they struck down about ten thousand Moabites, all vigorous and strong; not one escaped.

30 That day Moab was made subject to Israel, and the land had peace for eighty years. 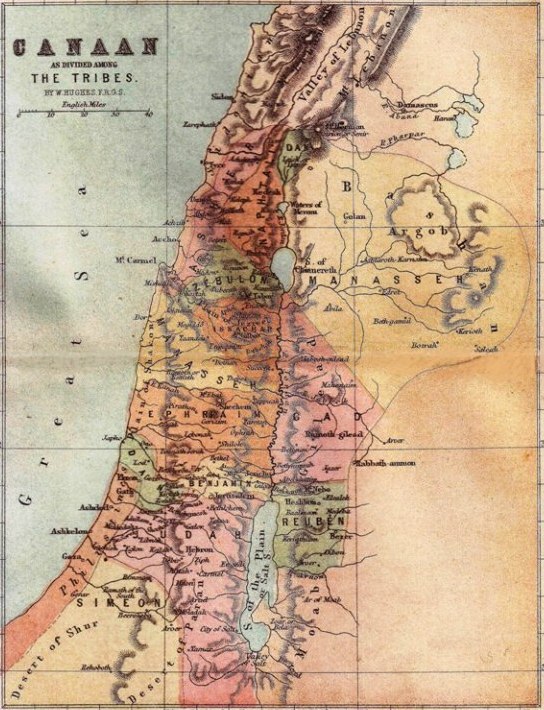 Map of ancient Canaan. Note the territory of the Tribe of Benjamin and Jericho north of the Dead Sea

One-on-one
Famous duels in the Bible

Psychological war & terror in the Bible