Who was Joseph of Egypt in the Bible?

The story is a sophisticated piece of writing with parallel passages and symbolism:

Joseph as a boy

But he was also spoiled, cosseted, and something of a tell-tale: the Bible says that Joseph ‘maligned’ his brothers, and the original Hebrew word means ‘hostile whispering’ . He was also a braggart.

So his brothers became furiously jealous of the favor he was shown. 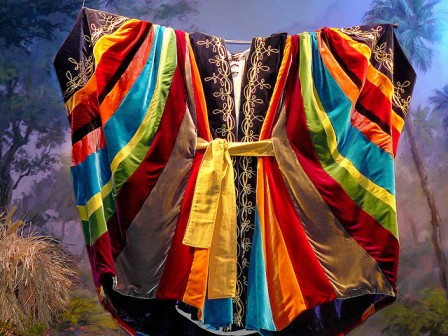 A modern imagining of the Coat of Many Colors. In fact, the bright colors in this picture were not available in the ancient world. The ‘many colors’ symbolises a special garment made of fine thread, not suitable for work-wear.

One example of this cosseting was the long-sleeved coat his father gave Joseph – the famous ‘coat of many colors’, designed so that the wearer could not do any heavy work. This meant his brothers had to carry Joseph’s share of the work as well as their own, and they could not have been happy about this.

This was coupled with his habit of telling tales about them to their father, which got them into trouble. Read Genesis 37:4: is it Joseph or Jacob they resent? The two are becoming confused in the brothers’ minds.

Joseph had dreams, and he was always interested in the meaning of these dreams. Twice he dreamt that he  dominated his whole family, including his father and mother.

Unfortunately he did not keep quiet about these dreams, but shared them with his brothers, who became increasingly irritated by what they saw as his conceit and arrogance. They worried that they would end up as his subordinates.

Jacob seems to have been unaware of how much the brothers hated Joseph. One day he sent Joseph to check on his brothers who were in the fields shepherding their flocks. The brothers were blatantly sarcastic when they saw him coming. Their dislike had turned into animosity – nothing new in this family: think of Cain and Abel, Isaac and Ishmael, and Jacob and Esau.

Before Joseph had reached them they had determined to kill him. Their plan meant that Joseph would not even receive a proper burial. 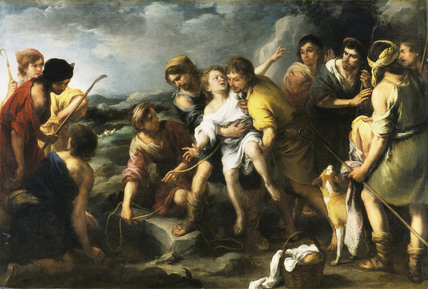 Reuben, the eldest, tried to head them off, or at least to buy Joseph some time. He was successful insofar as they did not kill Joseph, but instead threw him down into an empty water cistern. Cisterns were shaped like a bottle with a small covered hole at the top. They were hewn out of the rock, and it was impossible to escape from them.

Then the brothers sat down to eat, but as they ate they saw a caravan of camels approaching. Judah, another of the brothers, suggested they sell Joseph to these traders, instead of killing him – he was, after all, their brother.

This was what they did. They sold their young brother for twenty pieces of silver, the going rate for a male slave. Joseph’s brothers show the blood-stained coat to their father Jacob. Notice the dog’s suspicious sniffing of the blood-stain. He knows the truck, even if Jacob does not. Ford Maddox Brown

To cover up what they had done, they killed a goat and smeared its blood on Joseph’s coat. Then they took it to Jacob and told him Joseph had been killed by a wild beast. Jacob was distraught, and could not be comforted at the loss of his beloved son.

Joseph as a slave in Egypt 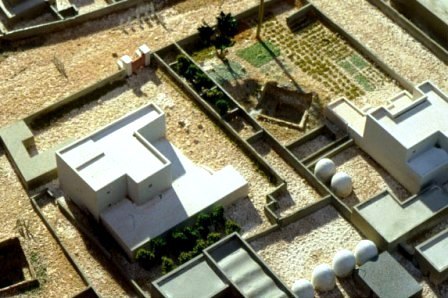 Reconstructed house of an important official in ancient Egypt; the beehive-shaped bins were for grain storage – important in the later stages of Joseph’s story

Joseph’s future looked uncertain. He was alone, penniless and a slave. But Yahweh was with him. The traders took Joseph to Egypt, where they sold him to a wealthy official called Potiphar.

It was a good buy, Potiphar found. Joseph had great talent as an administrator, and soon rose to a position of importance in the household. He was so good at what he did that quite soon Potiphar was able to leave the running of his estates to Joseph, and divert himself with other pleasures – notably, food. 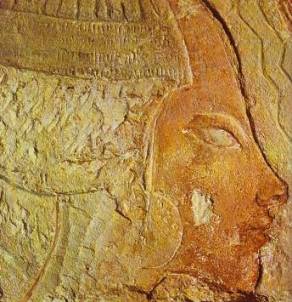 Joseph was young, clever and handsome. Potiphar had a wife who was rich, bored and lonely, and virtually abandoned by her husband. Before long, the inevitable happened.

Joseph was handsome, as his mother Rachel had been beautiful.

Potiphar’s wife fell violently in love with Joseph, and could think of nothing else but him – the Egyptians had a frank and uninhibited interest in sexual love, as their poetry shows (see the Egyptian love poetry in Potiphar’s Wife – her world).

‘Lie with me’, she said. In itself, lying beside someone is harmless enough, but Joseph knew she meant much more, and sensibly refused her offer.

Potiphar’s wife became insistent, not just inviting. One day she cornered him and pulled the loose cloak off his body, leaving him naked.

He ran away, but she was furious at the rebuff – a woman scorned. So she shouted ‘Rape!’ and told the other members of the household that Joseph had attacked her. She pointed to the cloak as proof.

When her husband came home, she told him the same story. He was outraged, and had Joseph put in prison.

Did he believe his wife? Surely if he had, Joseph would have been executed immediately. Putting Joseph in gaol gives Potiphar time to think and eventually, typically, he does nothing.

For more on the story of Potiphar’s wife, see  Bible Women: Potiphar’s Wife.

But even in prison Joseph prospered. The jailer saw how capable Joseph was, and entrusted the prisoners to him.

Joseph as a prisoner

In gaol Joseph became a model prisoner, reliable and trustworthy. Fairly soon he was administering the prison, and making friends with gaolers and prisoners alike.

Among the prisoners were two important officials, Pharaoh’s cup-bearer and his baker. They had each had a strange dream, and Joseph was able to successful interpret their dreams, telling the men what was about to happen to them.

Joseph had been right about the future of each man. 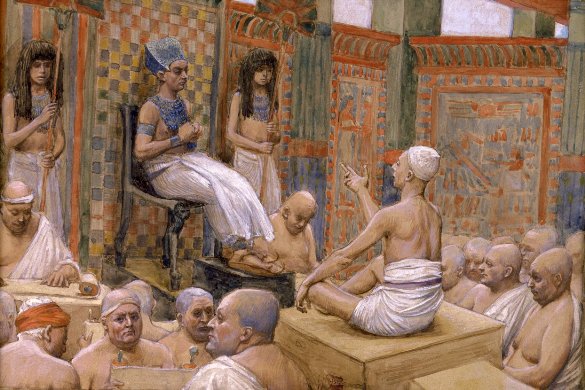 Two years later Pharaoh himself had a dream, and asked his wisest men to interpret it. They could not.

Then the cupbearer remembered Joseph, and told Pharaoh about this Hebrew man who could interpret dreams. Pharaoh sent for Joseph and told Joseph the dream he had had. 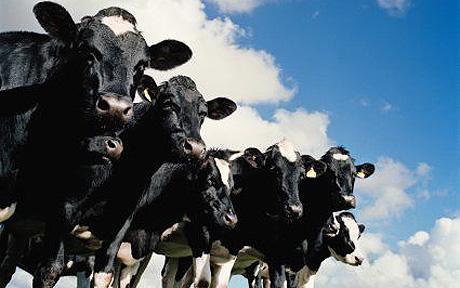 Joseph immediately knew what it meant, and told Pharaoh. It was a warning of a famine that was soon to happen. But there would be 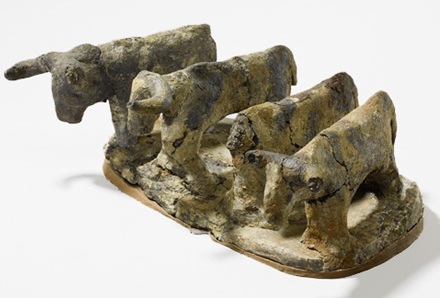 Pharaoh was impressed by Joseph’s interpretation, and believed it. He decided to organize food storage on a grand scale, and looked round for someone who could supervise this immense task.

His eye fell on Joseph, who was given the task. They would collect all the surplus from the good years and keep it in reserve against the seven years of famine that were to follow.

Pharaoh took off his signet ring and gave it to Joseph. Now only Pharaoh was more powerful than Joseph. 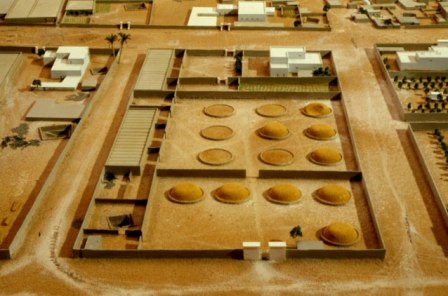 Joseph and his brothers reunited

It hit not only Egypt, but Israel as well. Joseph’s family were affected as much as the Egyptian were, and Jacob sent the ten older brothers down into Egypt to see if they could find grain there.

Unknown to them, Joseph was now in charge of selling grain, and when he saw them he recognized them immediately. They did not recognize him. 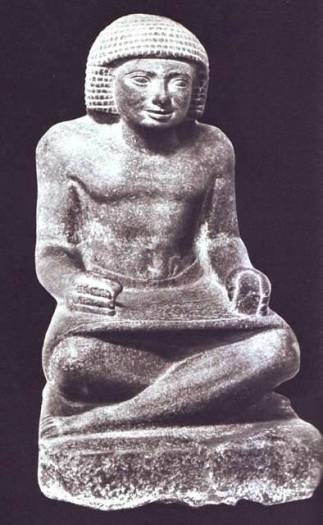 An administrator of ancient Egypt

He was not friendly to them, accusing them of being spies come to reconnoiter the land. They groveled, insisting on their innocence.

He repeated the accusations, and put them in prison. Only if they brought the youngest brother, who had been left at home with Jacob, would he believe them.

He harried and tormented them before he finally revealed his identity – and then he wept so loudly that Pharaoh was informed of what was happening.

The reconciliation was complete. They sent for their father Jacob, who hardly believe his son Joseph was still alive. Jacob came to Egypt, reunited with the son he had loved so much, and met Joseph’s two sons Ephraim and Manasseh. It was a wonderful moment. He spoke to all his children, told them he wished to be buried in the field that Abraham had bought as a burial site for his descendents. Then he ‘drew up his feet into the bed, breathed his last, and was gathered to his people’.

Joseph was overcome with grief. He had had so little time with his father. Then he had his father’s body embalmed, and he and a great company of relatives and servants accompanied the body on the journey.

When Jacob had been buried, Joseph and his brothers all moved back to Egypt, where they settled, and where eventually Joseph died. 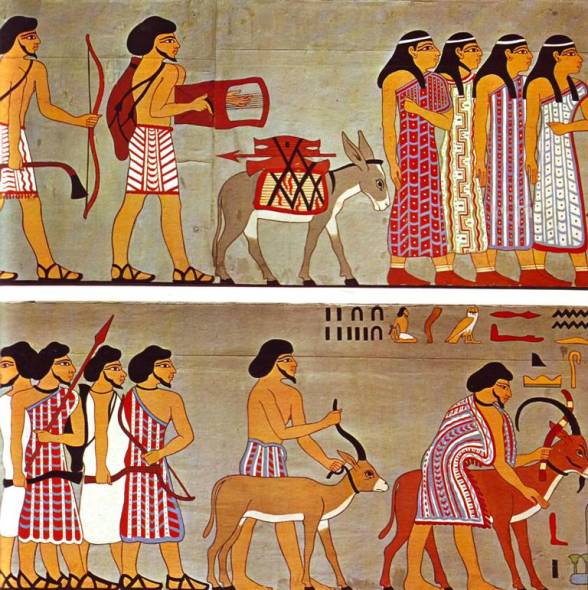 Hebrew traders travelling to Egypt, from an Egyptian tomb painting. Joseph’s brothers may have looked like this.