Who was King Saul in the Bible?

Saul, betrayed by many of the people he trusted most, is one of the great tragic figures of the Bible. 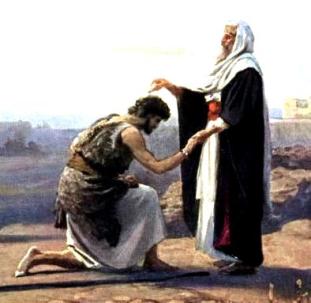 He was born the son of Kish in Gibeah of Benjamin. It was a great moment to be born, because the Hebrew tribes were just starting to organize real  opposition to the Philistines, their overlords. Saul emerged as a charismatic leader: “the spirit of God came mightily upon him” (1 Samuel 11:6).

He must have been capable, because the tribes rallied to him to lead them against the Philistines. Saul defeated the Philistines at Michmash. He drove them out of the highlands in about 1020 BC.

Now that they had a capable military leader, the Israelites began to realize what they could do and be, and this realization made them push for Saul be made king. After all, the surrounding groups and cities all had kings.

There was however a conservative minority who did not want a king. They wanted the old tribal league to stay the same.

Samuel seems to have been undecided on the matter. There are two parallel accounts of Saul’s election to the kingship, one being favourable to the monarchy, the other hostile.

According to this tradition (l Samuel 8:6-18; 10:17-27; 12). Samuel yielded to a spontaneous popular demand for a king and presided over his formal election at Mizpah, only after angry protests.

The notion of kingship came late to lsrael. Many people saw it as an attempt to imitate pagan neighbours – and wasn’t this a betrayal of their tradition? 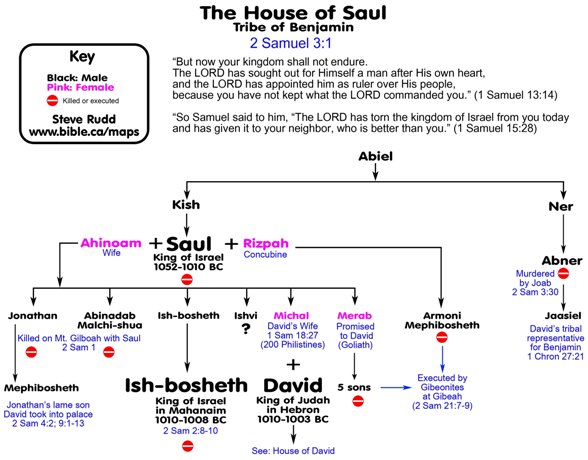 The ‘Manner of the King’

Samuel was deeply suspicious of monarchy, and he interpreted the people’s demand as a rejection of the idea of God being their leader.

He consulted God and, although he was directed to ‘hearken to the voice of the people in all that they saý to you,’ he also had to ‘solemnly warn them and show them the ways of the king’ (l Samuel 8:9).

His warning became a famous denunciation of monarchy. Samuel predicted that a king would

Samuel feared the change — but under pressure he agreed to the people’s demands (1 Samuel 8:4-22). 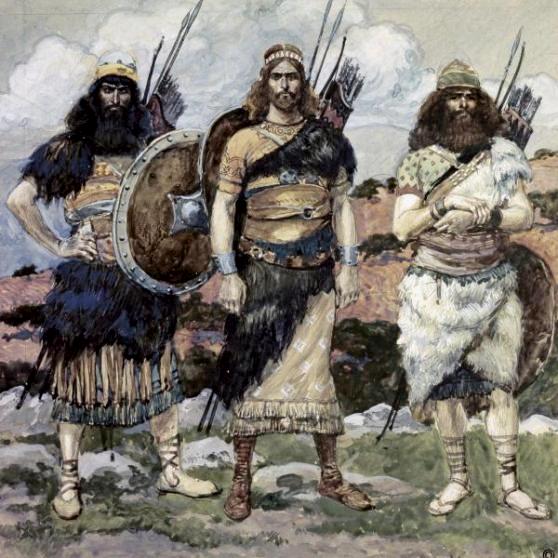 Canaanite city states had small armed forces consisting of conscripted foot-soldiers and professional warriors recruited from the ranks of the aristocracy. These were the ‘maryannu‘, or what we would call ‘knights’.

Performance of military obligations exempted the knights from payment of tithes or other taxes.

Under the Canaanite system

I Samuel 8 may be a genuine appeal by Samuel urging the people not to impose an alien Canaanite way of life upon themselves.

After rescuing the Israelites from the immediate Philistine danger, Saul led many military expeditions against the Moabites and Arameans. He was a warrior-king.

He also took an active part in the attempt to preserve Israel’s religious purity, and tried to suppress the witchcraft practiced by Hebrews and Canaanites alike.

The Bible reader must remember that Saul’s story is told by people who sympathised with David rather than Saul. The story always favors David, contrasting David‘s heroic personality, charm and popularity with Saul’s increasing nervous depression. 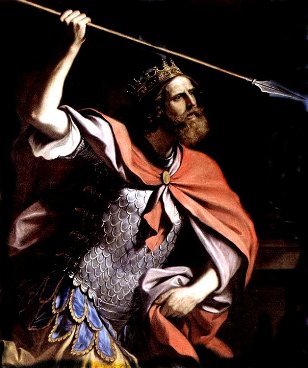 Saul had outbursts of passion, and seems to have been seriously disturbed. David, who was his cup-bearer and a close friend of his son, Jonathan, was detailed to calm him with music (I Samuel l6:l4-23).

Saul grew increasingly jealous of David‘s spectacular military success and growing popularity – as well he might. Increasingly on the outer, David sought refuge with Achish, king of Gath – a treasonous thing to do.

Saul’s relationship with Samuel also shows him in a tragic light. For the greater part of Saul’s life he was on bad terms with the people’s venerated religious leader. The split between the two appears to have occurred quite early in Saul’s career.

Whatever the cause, Samuel broke with him ﬁnally and ‘did not see Saul again until the day of his death.’ (I Samuel 15:35).

A few years after Saul had driven David away from his court the Philistines rallied again.

They marched northwards to Beth-Shean, cutting the country into two and preventing the tribes of Galilee and Transjordan from joining Saul.

This also presented the Philistines with a battleground which was favourable for chariot manoeuvring. Saul had no chariots and could not withstand the assault of the heavy Philistine armour in the plain. He moved on to the higher ground of Mount Gilboa. 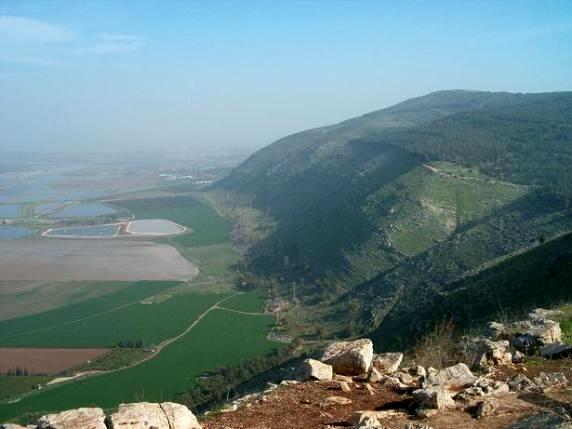 Mount Gilboa where Saul and his sons fought and died; the Plain of Jezreel below

Tradition has it that before the battle Saul visited a medium, the Witch of Endor, who conjured up the spirit of the departed Samuel from Sheol (the underworld), only to hear him pronounce the Curse of Doom on the fearful king (I Samuel 28:16-19).

Even after death, the prophet would not be reconciled to Saul.

On Mount Gilboa, Saul and his three sons, including Jonathan, were killed, and their bodies strung up on the city gates of Beth-Shean. The Philistines regained control of the country and kept it until well into David’s reign (circa 990 BC). 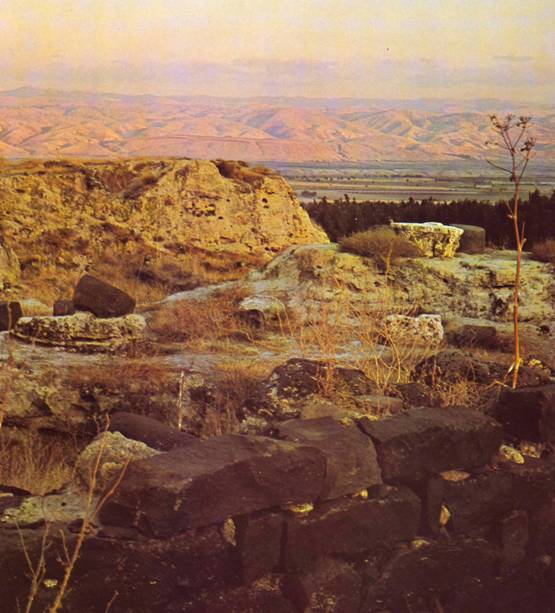 The ruins of Beth-shan. It was on these walls that the Philistines hung the dead body of King Saul.

It was David who was to establish the national unity of the Israelites, but he built on foundations which  had been laid by Saul. 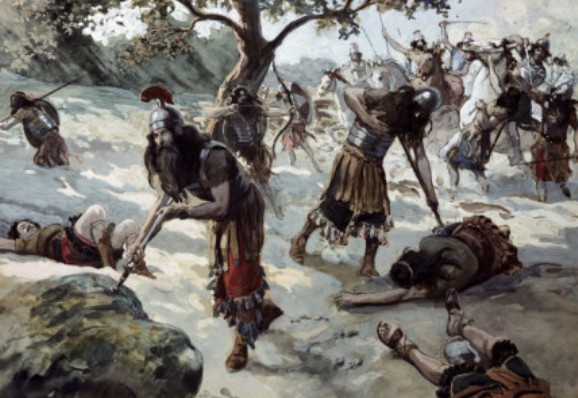 desperate battle on the slopes of Mount Gilboa – but they cannot have been much older than the boy soldiers in this tragic photograph from the American Civil War (at right).

Young men are used in battle for several reasons:

In Saul’s case, his sons fought because there was no other option. Their situation was desperate. Their father and his army faced overwhelming numbers and defeat was almost certain.

In the event of defeat, the princes would be executed by the enemy. Royal princes in the ancient world were never allowed to survive the overthrow of their father. This is why, for example, the seventy young princes of the Royal House of Omri were beheaded by Jehu when he killed King Joram and his mother Queen Jezebel.

Notes on Samuel’s choice of Saul