Cattle in the ancient world of the Bible

Cattle in the ancient land of Israel 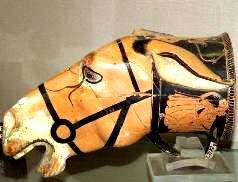 Ancient rhyton of a mule

Much of Israel’s land, especially the hill country, was poor pasture-land unﬁt for farming.

Because of this, the best way of exploiting the poorer soils of the hill country, especially around Jerusalem and to the south, was for sheep and cattle raising.

So despite the poor quality grazing land,  animal husbandry was a main source of livelihood for the people.

Horns and bones of ancient cattle have been found in the Jericho and Gezer excavations. They are of various domestic animals.  All the cattle found in Israel are of the short-horned variety, including oxen bones unearthed at Megiddo. 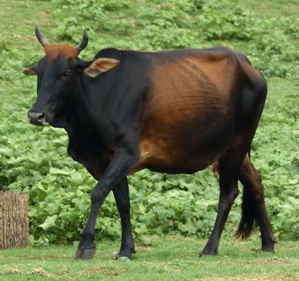 Is there more evidence?

Mosaics and paintings found in Israel, dating from the Roman and Byzantine periods, show zebu-like cattle (see photograph at right). In the later drawings and paintings of the same period, zebu-like and short-horned cattle appear in the same herd.

Zebu cattle were common in Mesopotamia and Egypt in very early times and were later brought to Asia Minor and Syria.  The types of cattle underwent some changes, i.e. the short-horned and zebu-like cattle like the one in this late Phoenician mosaic (see below) replaced the long-horns that had been common. 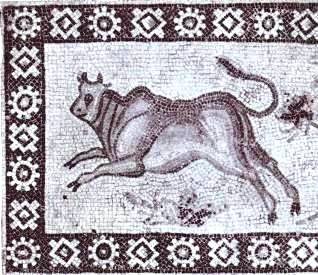 Phoenician mosaic of a zebu-type animal

Cattle were an important status symbol. In biblical times a man’s wealth was measured by the number of cattle he owned. The ox in a stall was a symbol of luxury, of having ‘arrived’.

Cattle were used for sacriﬁcial rites as well as for ploughing, threshing and transport.

The Bible refers several times to

Judging by the Egyptian mural below, cattle were branded with their owner’s mark.

Workers heat the brand in a fire; the cattle are thrown into a lying position, then branded; a scribe notes down the number of cattle; a relieved calf rejoins its newly-branded mother

Cattle used for farming work and for transport were kept in stables or stalls, while the others, who were in the majority, were left to graze in pastures.

The importance of cattle to the economy led King David to appoint special commissioners of cattle in those areas (1 Chronicles 27:29).

Milking cattle were not widespread in Israel, and the few dairy products mentioned in the Old Testament, such as milk and butter came from sheep and goats (Deuteronomy 32:14; 1 Samuel 17:18; II Samuel 17:29).

Beef was regarded as a delicacy in Israel and was served at royal banquets or when important guests were entertained (Genesis 18:7; I Kings 4:23).

Cattle dung was used as fuel, but was not well regarded, which is understandable. (Ezeliel 4:15). 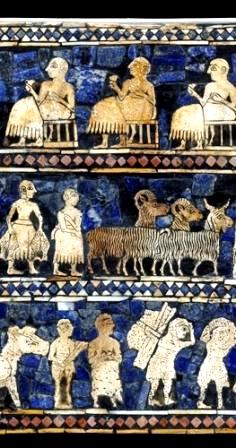 Section of the Standard of Ur, showing goats

The wild goat of Persia (capra aegagius), which was apparently the ancestor of the domestic goat, was also common in the Aegean Islands, Asia Minor, Syria, Mesopotamia, Afghanistan and northwestern India.

There are numerous species of goats differing from each other in build and length of hair, ears and horns.

Unlike other cattle, the goat can exist in extremely arid areas.

In ancient times, goats were the only source of meat for the semi-nomads, and was raised by the Patriarchs (Genesis 15:9 etc.). Kid meat was regarded as an excellent food (Genesis 27:9) although adult goats were not considered very highly.

Goats were extremely important in other ways:

All in all, an extremely valuable animal.

Milk and cheese in the Bible

Goats’ milk was drunk, churned into butter or soured into clabbered milk. Known as leben in Arabic, this was made from both goats’ and sheep’s milk by adding a little to fresh milk to make it ferment.

Shaken violently in a goatskin bag, it became semi-solid and, with the water squeezed out, yielded a soft cheese. 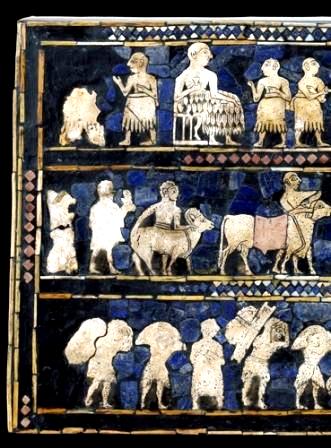 A fat-tailed sheep on the Standard of Ur (centre)

Most of the eleven species of wild sheep came from Asia, but the domestic sheep has been in Palestine and Syria for so long that its original home is uncertain.

Israel’s sheep are of the fat tail variety, in which the tail may reach a weight of 10 or 11 pounds. As this was considered a delicacy — the fat of the tail is still regarded as the choice portion in the East — the whole tail was burned when a sheep was sacriﬁced (Exodus 29:22; Leviticus 3:9; 7:3; 8:25; 9:19). At right, in the centre of the image, is a fat-tailed sheep, from the Standard of Ur.

The best time for shearing sheep is in the spring, after the last heavy rains, when the nights are no longer cold and cannot harm the shorn ewes, or affect their milk yield.

The shearing was a day of festivity and rejoicing – see the story of King David’s wife Abigail. The sheep-farmer would invite his relatives and friends to come and watch the shepherds and shearers and when the shearing was over, would provide entertainment and a sumptuous feast for all.

Below is an image of a fat-tailed sheep on a stone bowl from the Uruk III period of Ur (circa 3000 BC).

Sheep as a Bible symbol 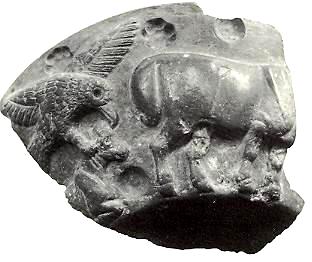 There are hundreds of references to sheep, sheepfolds and shepherds in the Bible. From the Patriarchs of Genesis, to the shepherds grazing their ﬂocks below Bethlehem, the sheep was enough a part of daily life for almost every family to have its pet sheep as a plaything for the children, even drinking from their cup (II Samuel 12:3).

A fruitful ﬂock was a sign of economic prosperity (Psalms 144: 13) and also something demanding constant care and watchfulness. The shepherd of a hundred sheep would yet rejoice over one lost lamb that was returned (Matthew 18:12-13). This is literally illustrated by a Syrian statuette of a shepherd carrying a lamb, made almost two millenia before. 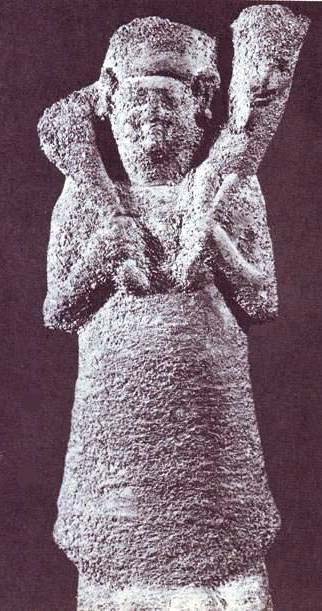 Syrian statuette of a shepherd with his sheep, 2,000BC

Apparently asses were domesticated in the fourth millenium BC. Discoveries in Egypt show it was widely used  there as a beast of burden as early as the pre-dynastic age.

The kings of Mesopotamia owned caravans of asses as early as the 3rd millenium BC and they are mentioned again during the reign of Hammurabi (18th century BC).

Evidence for the use of asses in the 19th and 18th centuries BC has also been found in Cappodocia of Asia Minor and from the records of Mari.

The ﬁrst caravans in the Near East were probably of asses, as illustrated in the 19th century BC painting of the caravan of Beni-Hasan (see below). In Patriarchal times, before camels came into general use, the ass was the Hebrews’ most important means of transport. 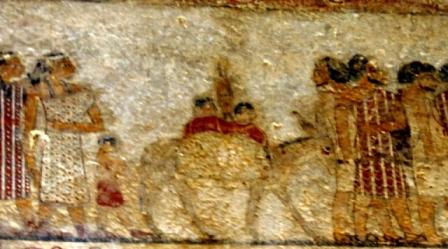 It was considered demeaning for a man to ride an ass (Zechariah 9:9). For kings, such a conveyance was an outright humiliation. After the conquest of Megiddo, the ruthless Thutmosis lll sent off the rulers of the defeated countries on asses, instead of in their chariots. 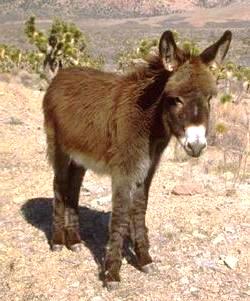 Kings and knights rode on mules (David) or in chariots pulled by horses.

The messianic king, however, would ride on a beast of peace. This is the basis for Jesus’ entry into Jerusalem riding on an ass’s colt (Luke 19:30 ff; Mark 11:4 ff).

The Law of Moses forbids harnessing an ass and an ox to the same plough (Deuteronomy 22:10), although both animals were used in farming. Other speciﬁc laws, such as

all bear witness to the important place which this animal occupied in the Israelite economy.

Mules (pered in Hebrew) are the offspring of the big he-ass and a mare. They are very strong and hardy pack animals and although forbidden by Mosaic Law (Leviticus 19:19), were used at the time of David and Solomon (II Samuel 13:29).

David even rode on one (I Kings 1:33) and they became quite common afterwards.

Mules was an important item in trade. They were known in Egypt as well as Assyria. According to Ezra (2:66) the returning Israelites brought 245 mules with them from Babylon. 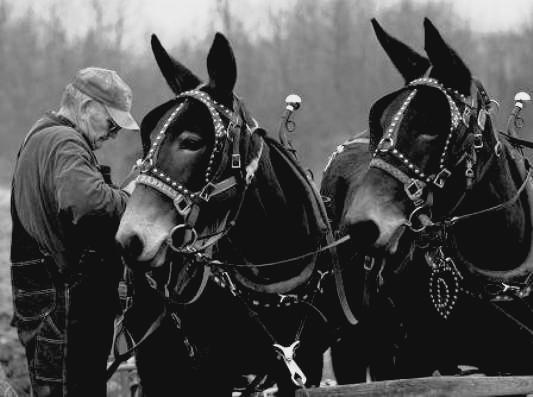 Obviously not an image of mules from ancient times, but this photograph gives an idea of the sturdy strength and beauty of these animals. Courtesy of the Farnsley-Moreman House in Louisville, Kentucky. Photograph by Joe Schneid.

The camel’s unique physical qualities enable it to survive the severe conditions of the desert.

These abilities together with its swaying walk have earned the camel the title of ‘ship of the desert’.

In Mesopotamia, carvings from the time of Tiglat-Pileser I (circa 1100 BC) and Shalmaneser III (9th century BC) were found (see above).

These show Bactrian camels being presented as gifts to the Assyrian kings. The inscription of Shalmaneser III, in which he boasts of his victory in the Battle of Qarqar (853 BC) refers to Gindibu the Arabian who commanded a battalion of one thousand camels.

A straw cushion was placed on its hump to make riding more comfortable (Genesis 31:34). The camel was also used for ploughing, its wool for weaving and its dung for manure.

The ancient Standard of Ur, showing the different animals used by the people of Mesopotamia in ancient times

Animals at
the birth of Jesus

Jesus enters Jerusalem on a mule