Ancient Weapons: the Bow and Arrow

Weapons of war: the bow and arrow

Reconstruction of a composite bow

The major weapons in ancient times were

For my money, the most beautiful of these was the bow and arrow. In the hands of a skilled archer, it was simple, effective, deadly.

Made of wood, horn, tendons and glue, it required superb craftsmanship.

The pay-off was in its performance: it out-classed every other weapon available in the ancient world, barring perhaps the sword…

…especially when it morphed into the composite bow, surely one of the most beautiful weapons ever made. 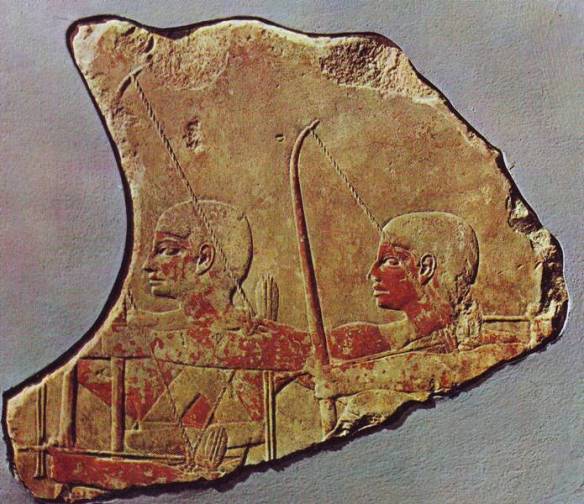 Egyptian archers, fragment found at Lisht near the pyramid of Amenemhet I; bows at this time (circa 1900BC) already had hand grips and curved ends.

The bow – some basic information

The simple bow The shape of the wood in an early simple bow was a single convex arc. But this did not exploit the maximum pliability of the wood to get the best possible tension.

So the double-convex or double-span bow – like the shape of a Cupid upper-lip – was invented; this shape gave it greater tension and range. 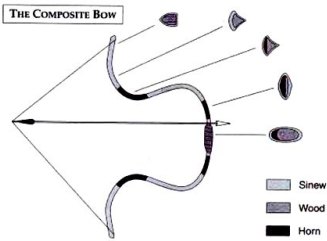 The composite bow The emergence of the bow as a battle weapon of first importance came with the introduction of the composite bow. It was made of four materials

The wood was sometimes made from different trees with varying pliability. The back of the bow was covered with bands of sinews. The belly was reinforced with two sections of animal horn. 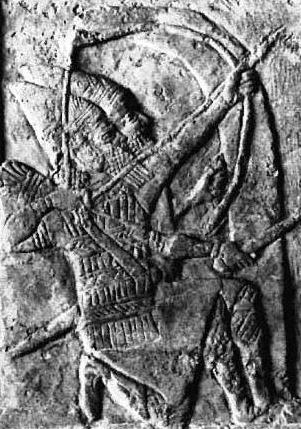 It was cleverly described by an Arab author of the 15th century AD. He wrote:

“The structure of the composite bow is not unlike that of man. The human body is made up of four basic elements—bones, flesh, arteries, and blood.

Man has back and belly. So has the bow. And just as man can bend forward but is likely to damage himself by bending too far backward, so with the operation of the bow.”

The composite bow had an effective range of some 300 to 400 yards, though its absolute range was about twice that distance. 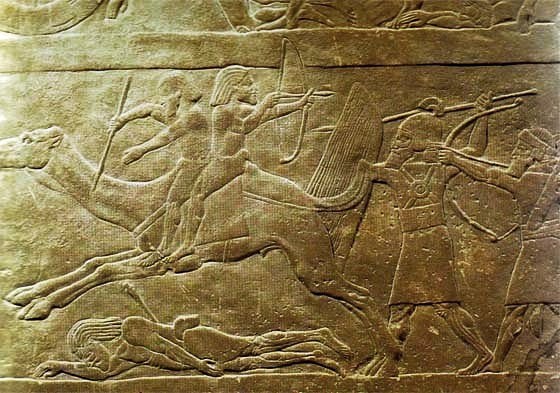 A brutal illustration of the superiority of a technically advanced composite bow (far right), from the walls of Ashurbanipal’s palace at Nineveh

The arrow was made up of three parts:

Arrowheads were leaf-shaped or triangular, and flat or with a central spine or rib. The form was dictated by the nature of the defense and the armor of the enemy. 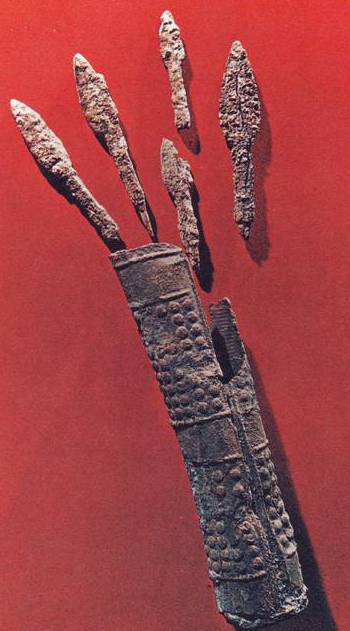 Metal quiver with arrows, from Mari on the Euphrates. 16th century BC

In Egypt the bow appears in the hands of some of the warrior-hunters in the Hunters’ Slate Palette (see end of page). The double-convex form shows that they had already discovered that this device created greater tension, and therefore greater speed, force and range.

In the celebrated victory monument of the Accadian king Naram-Sin (below) the King carries a bow in his left hand and an arrow in his right. The bow has the two characteristic features of the composite bow: 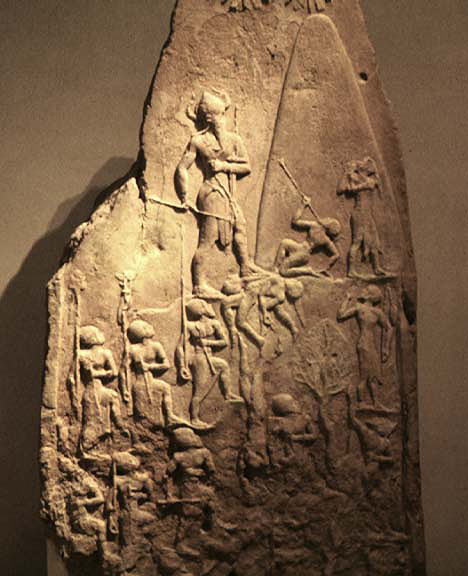 In the time of the Patriarchs

In the time of the Patriarchs, the use of bow and arrow was rare. It was simply too difficult to make – beyond the capacity of the semi-nomadic tribes of Syria and Palestine.

However, a wall painting from one of the tombs at Beni Hasan shows a caravan en route to Egypt. 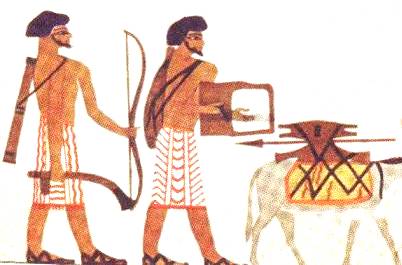 Among the figures is a man carrying weapons (see right). He carries a double-convex bow and quiver, and a club. One the donkey preceeding him is a spear and what may be an anvil.

The figures are said to be a group of ‘Asiatics’, probably Hebrew traders. This suggests that the ‘Abiru’ tribes almost certainly had access to bows/arrows.

What the Hebrew tribesmen could not make themselves, they traded for.

A number of bows were discovered in Egyptian tombs. They are made from a single, strong, and sizable piece of wood, and measured between 1.5 and 1.7 meters.

These bows were simple, but their penetrating force was considerable if the enemy was without armor.

The Hebrews in Egypt

The composite bow was the decisive weapon in all the big armies mentioned in the Bible during this period. 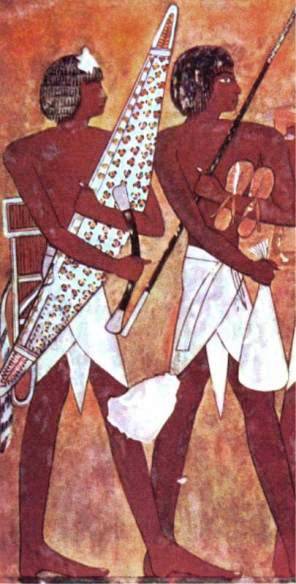 It was, however, difficult to make, and the armies of small kingdoms (like Judah) and the fighting men of small tribes (like the Israelites) could not produce this type of weapon in mass quantities.

An additional difficulty was that suitable wood, horns, and tendons were not always available. The Ugaritic texts itemize the types of materials required to produce this instrument, when the god Aqhat promises the terrifying warrior goddess, his sister Anat, to supply her with the necessary materials:

“I promise you ‘tqbm’ [birch trees?] from Lebanon, tendons from wild bulls, horns from wild goats, and sinews from the locks of bulls.”

What is the soldier in the Theban tomb painting carrying? And what is its purpose?

A case for a composite bow.

Composite bows were valuable pieces of equipment. They were liable to be damaged by changes of weather or rough handling and so, like a violin, they were frequently kept in special cases.

The arrows were generally carried in a quiver, which was long and cylindrical and made of leather.

The operation of the composite bow required strenuous training. The archer had to

For this purpose special practice ranges were established. The instructors would stand behind the trainees and correct their position and aim. Training would begin on the simple bow and lead up to the composite weapon.

A contemporary report of practice firing by Pharaoh Thutmose III boasts that:

“He shot an ingot of copper, every shaft being split like a reed. Then His Majesty put a sample there in the House of Amon, being a target of worked copper of three fingers in thickness, with his arrow therein. When it had passed through it, he made three palms come out of the back of it (i.e., about 25 centimeters of the arrow protruding from the back of the target).” 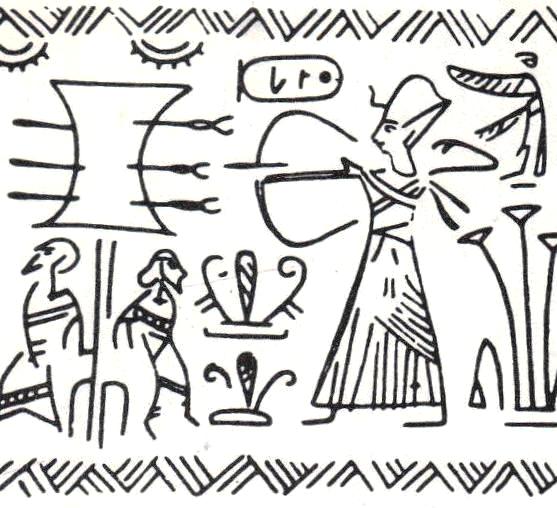 Drawing taken from a cylinder seal, showing Rameses II firing at a target; beneath it two prisoners are tied back to back – waiting to be shot?

During this period archers played a decisive part in battle both against cities and in open terrain, and were prestige warriors worthy of the best care and equipment. 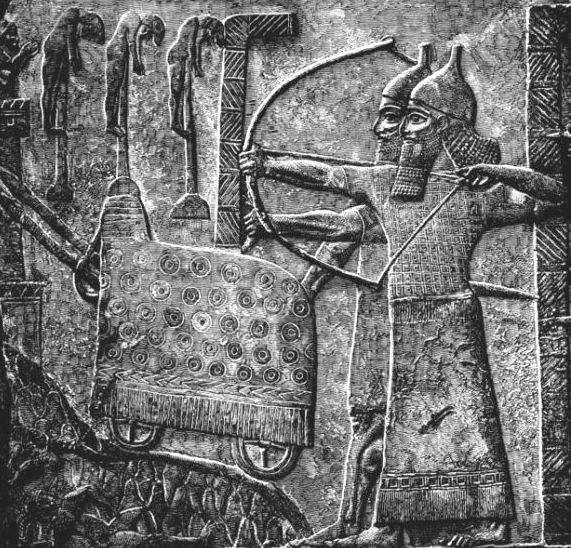 The Assyrian archers of Tiglath Pileser II attacking a city. Notice the sophisticated composite bow, the protective armor, the battering ram and the citizens impaled on sharp spikes.

In battle, an Assyrian archer needed both his hands to wield his bow. So he wore a very long coat of mail even though its weight hampered movement.

In addition he was often accompanied by a special shield-bearer, with a small round shield that protected the archer’s face. In such cases the shield-bearer, too, wore armor.

Tiglath-pileser went one step further. He introduced a huge shield, long and heavy, which was carried by a special shield-bearer to cover the archer. The length of the shield was slightly more than the height of the man, and its top was angled, like a hood, turned inwards, so that it shielded the archer from the arrows of the defenders on the walls.