Chariots of War in ancient times 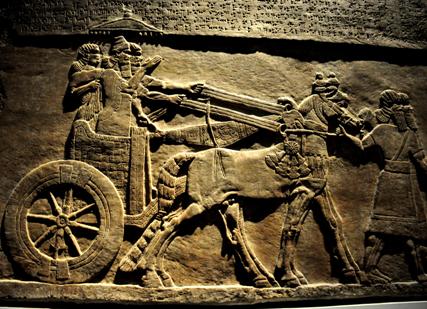 The chariot was complicated in design and difficult to manufacture.

But what a beautiful, fearsome thing it was.

No wonder it became the status symbol of the ancient world.

What did a battle chariot do?

To be useful, the battle chariot had to be quick and maneuverable as well as stable. 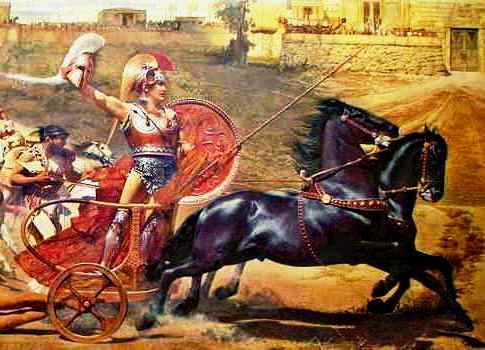 Achilles, with the body of Hector in tow, drives his chariot triumphantly around the walls of Troy 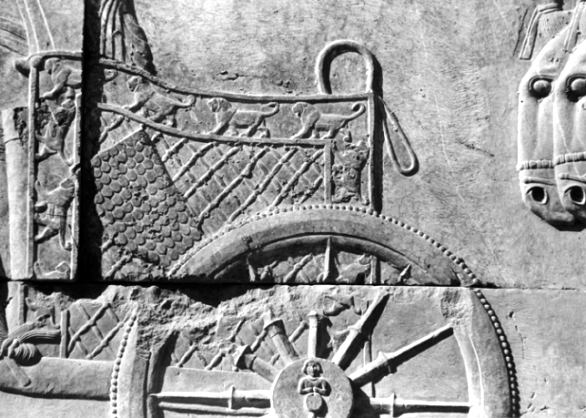 A king’s chariot, this one etched onto the wall at Persepolis. Chariots like this were the Ferraris of their time, built for speed and show, not for battle conditions

Usually there was space in the chariot for one weapon-carrying soldier and one driver.

For the designers of chariots there was a constant push-pull between speed and stability. You can see this if you examine the different sorts of chariots in the ancient world. 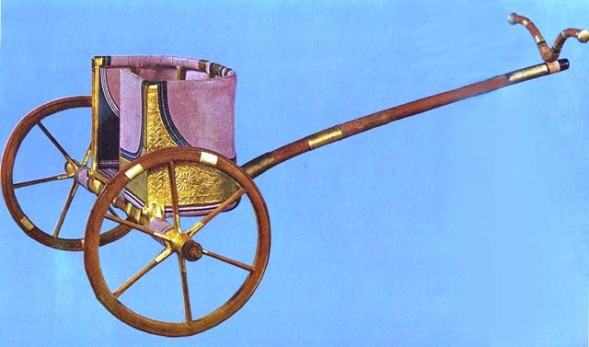 Egyptian chariot circa 15th century BC

The chariot was a complex, beautifully functional piece of design.

Wood was the main element used, since it combined strength and lightness. There were special types of wood for each part of the chariot. Strips of leather and various metals were also used.

The chariot was difficult to manufacture. It could only be produced by countries with the right resources, and skilled craftsmen who knew what they were doing. When King Ahab of Israel said he had 900 chariots, he was describing not only his military might, but the extent of his country’s resources.

For much of its early history Israel was unable to provide these resources. So it relied instead on outside manufacturers, or on surprise attacks and guerilla warfare which did not need chariots.

Chariots before the time of Abraham

Who had the first chariots?

The Sumerians developed the use of chariots much earlier than Egypt. Battle chariots were used in Mesopotamia in the first half of the 3rd millennium; Egypt did not do so until 1,200 years later.

Basically, there were two types of battle chariots: 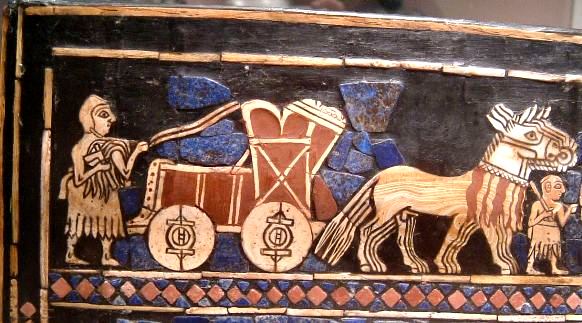 Four-wheeled chariot drawn by four asses, from the Royal Standard of Ur

The chariot on the Standard of Ur (above) is a 4-wheeled vehicle, carrying two soldiers, a warrior and his driver. At this early stage chariots were usually pulled by four animals, not necessarily horses; wild asses or onagers may have been used.

The fact that four animals were needed shows that the vehicle was heavy, and that its traction system was primitive. The wheels were solid and without spokes, liable to break and splinter when the driver tried to take a corner at speed  – or worse still, roll over. So a four-wheeled chariot would have been useless in the confusion of pitched battle.

BUT direct frontal assault on the enemy was common. The Sumerian chariot would charge straight at the front ranks of the enemy, like a great bulldozer, then engage him with javelins, axes, or spears. The military use of bow and arrow was not yet common.

While the Hebrews were in Egypt Reconstruction of a light-wheeled Egyptian chariot

Chariots came relatively late to Egypt, and they came via Canaan. We know this because the Egyptian terms for the chariot and horses are borrowed from Canaanite words.

Chariots at this time (1570-1200BC) were light, two-wheeled vehicles, each wheel having four to six  spokes.  The body of the chariot had a leather-covered wooden frame, and was drawn by two horses.

There were three main parts to this type of chariot:

Through most of the 15th century BC the Egyptian chariot was almost identical with the Canaanite, but when Thutmose IV became Pharaoh, the chariot became heavier, with eight-spoked wheels. 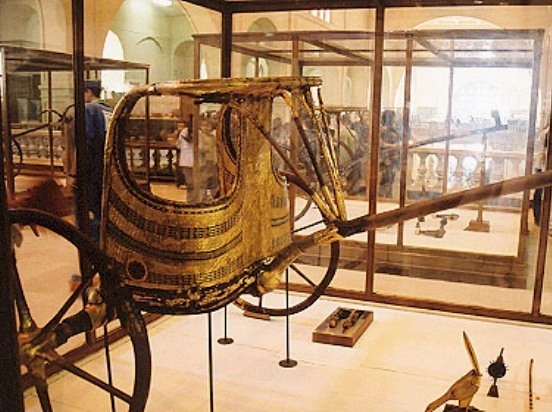 Chariot from the tomb of Tutankhamun

The tomb of Tutankhamun contained a dis-assembled chariot about 1.25 meters high and 1.02 meters wide. The width of the body was 4/7 of the length of the rod running down its center, which would have given it great stability when turning corners.

After this period Egyptian chariots remained unchanged for some centuries. The only addition was a side-fitted quiver for javelins, in addition to the bow case and arrow quiver.

Egyptian and Canaanite chariots used two horses, but judging from the proportion of horses to chariots captured in battle, there were three horses to a team: two in harness and one in reserve.

Why have three horses for a two-horse chariot? Though chariot horses were protected in battle by special armor, it was easy for the enemy to disable a horse, so a third horse was kept as emergency replacement.

During the period of the Judges

Only the great armies were able to maintain chariot squadrons. So during the period of the Judges there is no mention of chariots in the tribal armies of Israel. In any event, the territory held by the Israelites at this point was hill country – better suited to cavalry than chariots.

The only mention of chariots is the great battle between Deborah and Barak, and the Canaanite general Sisera.

Here, the 900 iron-wheeled chariots of the enemy were worse than useless in the quagmire at the bottom of Mount Tabor:  ‘And the Lord threw Sisera and all his chariots and all his army into a panic.’

The Israelite guerilla fighters/army were able to slaughter their enemy and claim the day. (Judges 4 and 5). 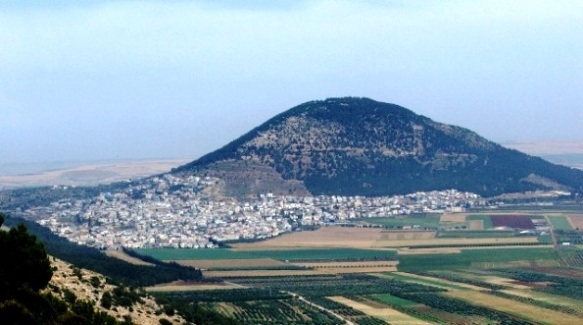 Mount Tabor. The battle between the Israelite and Canaanite forces was fought on the plain at the bottom of the mountain. The flat land was transformed into heavy mud by the storm before the battle, and the enemy chariots were bogged down and useless.

Chariots of David and Solomon

When David set up his kingdom, chariots appeared. We know this because the prophet Samuel warned the people that a king ‘will take your sons, and appoint them for himself, for his chariots, and to be his horsemen; and some shall run before his chariots.’(I Samuel 8: 11).

These were not battle chariots, of course. The bodyguard of runners was needed when the King drove his chariot through the alleys and narrow winding streets of the city. In fact, we do not know if David used chariots in battle. 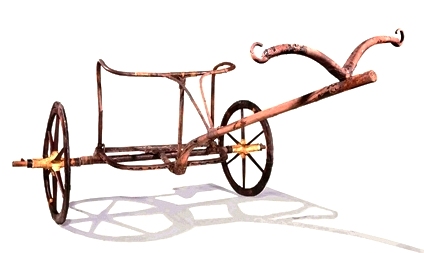 The basic structure of a chariot

But if the chariot squadron in David’s army was small, things changed when Solomon took over the army. Annoyingly, we don’t know exactly how big his chariot cohort was, since the Bible’s figures vary:

Which of these figures is correct?

Difficult to say, but the fact remains that Solomon must have had a large number of chariot horses. 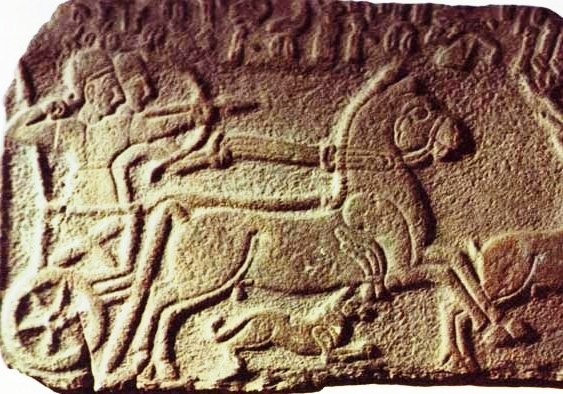 After Solomon’s death, his empire split in two:

The kingdom of Israel was by far the richer of the two, and much more able to support chariot cohorts in its army.

During this period chariots probably represented the principal strength of the Israelite army in open battle. In the Battle of Qarqar the army of King Ahab had 2,000 chariots, a figure which exceeded the combined total of chariots in all the other allied armies.

There are no images of the Israelite chariots, but Assyrian chariots of this period have two men in the crew, a driver and an archer. 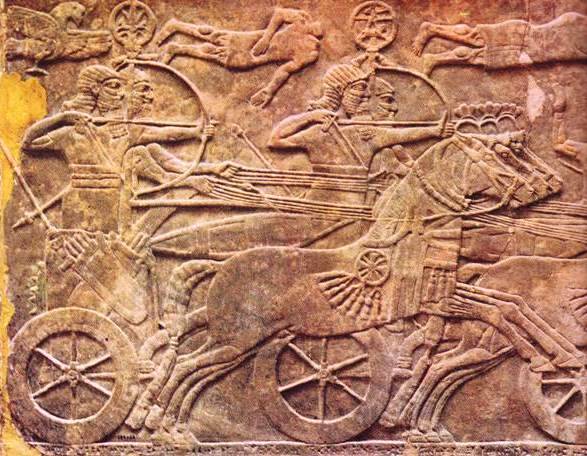 The King’s chariot, however, carried three – the King, his driver, and a third man who bore a shield for the protection of the King. This royal shield-bearer became, in time, a feature of the crews of all chariots.

The chariot held such weapons as

Tiglath-pileserIII re-organised and re-equipped the Assyrian army and turned it into a powerful force. One of his innovations was to make the chariot a heavier vehicle.

Why did he do this? The Sargon chariots had a crew of three. The third crewman held two round shields, one to cover the driver and the other the archer. The number of horses was increased to four to cope with the added weight.

The chariots of Sennacherib reintroduced six-spoke wheels and the elliptical cross-piece between yoke and body. In the Sennacherib reliefs depicting scenes of the conquest of Lachish and the removal of the spoils, there is an illustration of a Judean battle chariot, belonging no doubt to the Governor of the city. This shows the shape of the chariot in use in the kingdoms of Judah and Israel. 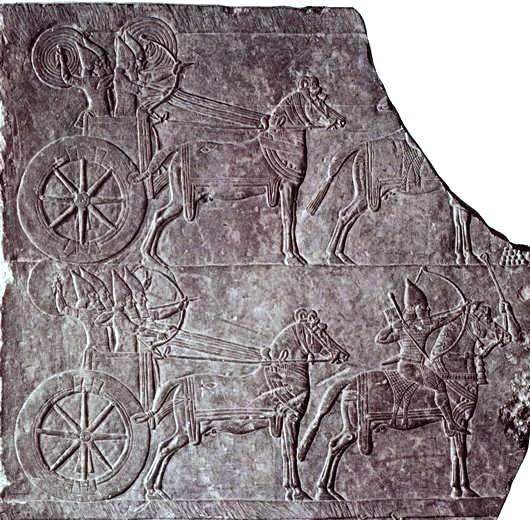 A characteristic chariot from the time of Ashurbanipal,
with a large-wheeled, high-platformed chariot manned by a team of four

The chariot reached its most advanced and heaviest stage in the days of Ashurbanipal. Its wheels never had more than eight spokes, but their diameter was much greater and their rims were particularly thick.

The crew had now grown to four—driver, archer, and two shield-bearers.This virtually converted the charioteers into a mounted infantry unit, and could at a stretch be seen as the proto-design of the modern tank.

Shalmaneser recorded that Ahab, King of Israel, had a chariot force of 2,000 at the Battle of Ramoth-Gilead.

Despite this mighty force, he was not safe. A stray arrow pierced the gap between his scale armor and the breastplate, and he was mortally wounded. Dying, he asked his soldiers to prop him up on the base of his chariot, so that he might see the battle. At sunset he died, his blood washing the floor of the chariot – a good death for a warrior king like Ahab.

It was all downhill after that. The once-large chariot forces of the kings of Judah and of Israel in the 9th century BC became progressively smaller and poorer until, by the end of the century, the army numbered only “fifty horsemen, and ten chariots, and ten thousand footmen; for the king of Syria [Aram] had destroyed them, and had made them like the dust at threshing.” (II Kings 13: 7)

The battle chariot’s reign was over. Frightening the enemy – psychological war in the Bible