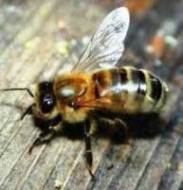 The campaign of Deborah and Barak against Sisera and his army is one of the most famous military clashes of the Bible. We have a first-hand account in that majestic Biblical poem, the Song of Deborah.

Like the chronicle of Rameses II that describes the Battle of Kadesh, Deborah’s battle appears in parallel forms in prose and poetry (Judges 4 and 5).

But unlike the Kadesh records, Deborah’s story is not backed up by wall reliefs that show images of the battle scenes. Despite this, it is still possible to work out the basic tactics of the tribal warriors and the way they used topography and weather conditions against the Canaanite chariots. 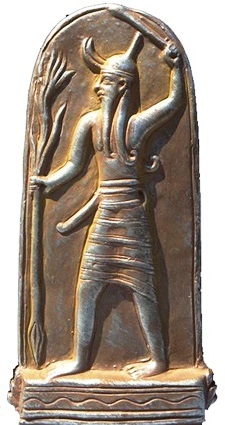 It delighted the Israelites that Baal, the Canaanite god of rain, apparently caused the defeat of the very people who worshipped him

The Canaanites in ancient Israel were superior in virtually every aspect of war:

Joshua had done his best to defeat them, but they still had a firm hold on the coastal area and the Jezreel Valley – which was the best land in the area.

The local Canaanite kings had formed a league of states under the leadership of King Jabin of the city of Hazor.

Their cities had massive fortifications – but this was not enough. Staying behind their closed gates would not subdue the Israelites, who were causing more and more trouble. The Canaanites had to pursue a more active course – get out from behind their city walls and fight.

The Canaanite army’s main force, or at least that part of it which went into action against the Israel tribes, was made up of chariot squadrons, each chariot manned by two warriors and drawn by horses.

The illustrated monuments nearest in time to this period are the reliefs and ivory carvings from Megiddo (see below). These show details of the fearsome Canaanite chariot.

It is heavier than the Egyptian chariot, as can be seen from the position of the axle-rod, which is not at the rear of the body. It seems to have been covered with armor and strengthened by metal plates.

At this time the federation of Israelite tribes was headed by Deborah, a leader and prophetess. There have been other women like her:  Miriam the sister of Moses, or Salome Alexandra who ruled the Hasmonean kingdom from 76-67BC. These women played a decisive role in Jewish history.

But Deborah stands out. She provided leadership, unflinching valor, and above all clever strategy and tactics.

The tribal army of Israel at this time was still in its militia stage, made up of warriors from individual tribes who were summoned to battle only in an emergency. Each clan and family sent their quota of warrior-sons to battle. All very well, but not a trained, cohesive army like the one they had to face in battle.

Deborah faced the sort of problem a modern-day commander might face if he had to fight cohorts of tanks in open country with only lightly-armed infantry and no armor-piercing weapons.

With this in mind, Deborah developed a three-phased campaign. She relied on

The main part of Sisera’s army was at “Harosheth of the Gentiles.” This must have been close to the Valley of Jezreel, for the site of the decisive battle was near Megiddo, in the western section of the valley. 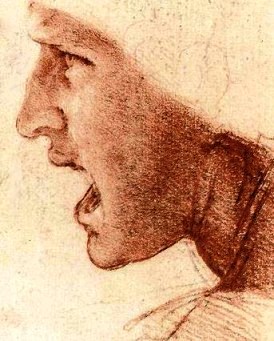 What were the tactics?

The tactics used by Deborah and Barak are less clear. But from the text it seems there was a surprise onslaught by the Israelite troops upon the Canaanite chariots in the valley near the River Kishon.

Crucially, time chosen for the attack was arranged to coincide with the heavy rains when the river was swollen, overflowing its banks, and turning the ground into sticky mud. The Song of Deborah (Judges 5: 21) jubilantly proclaims: ‘The river of Kishon swept them away, that ancient river, the river Kishon.’

Deborah summoned as many Israelite tribesmen as she could get – the main contingent was from Naphtali and Zebulun. Some of the tribes would not come, but those who did camped at Mount Tabor.

It was hilly ground, easily defensible, with a flanking position facing the Jezreel Valley. There was excellent visibility in all directions. The sloping ground gave the Israelites security against any Canaanite chariot attack.

The main Canaanite army base was at “Harosheth of the Gentiles.” This must have been close to the Valley of Jezreel, for the site of the decisive battle was near Megiddo, in the western section of the valley. 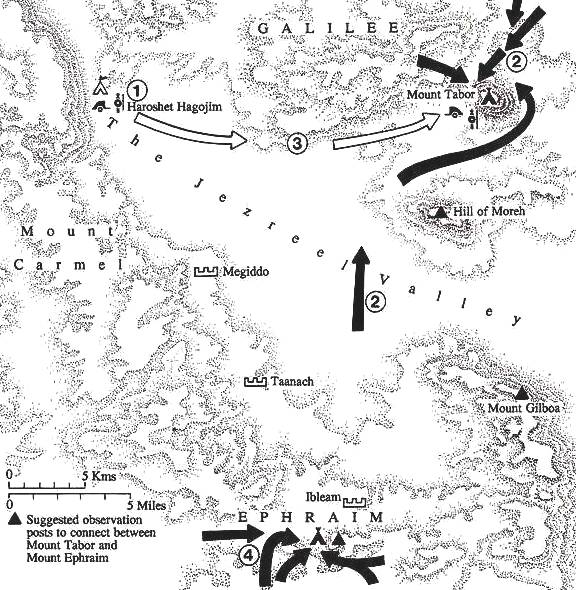 Key to map: 1: Sisera’s first base camp; 2: Deborah and Barak concentrate their forces on Mount Tabor; 3: Sisera moves to occupy Mount Tabor; 4: the second Israelite force near the northern slopes of Mount Ephraim

Deborah guessed that when Sisera was told about the Israelite deployment, he would concentrate all his forces at Mount Tabor, to contain Barak. 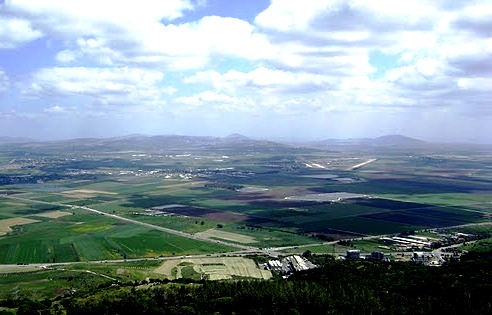 The plain on which the battle was fought

Eventually, Sisera would have reasoned, Barak would be forced out into the open to fight on the open plain – where he could be defeated.

But Deborah had a second force at her disposal, militia she had gathered from Ephraim. She used this body of soldiers to draw Sisera away from his vigil opposite Mount Tabor, towards the swampy area of the Kishon River in the western part of the Jezreel Valley.

She must have provided good reason for him to abandon his first position – tantalizingly, the Bible does not tell us what it was.

But it must have been a movement threatening the unprotected plain. Only this would have induced Sisera to break camp and move in the direction of the Kishon River, to secure the narrow pass between the Carmel and the Tivon hills leading from the Jezreel Valley into the coastal plain.
Whatever this feint was, it worked.

The opposing forces watched each other for a few days. One guesses that Deborah was waiting for rain to turn the Kishon and its tributaries into a mire. When she received the confirmation she hoped for, she gave Barak the sign to attack: ‘Up, for this is the day in which the Lord hath delivered Sisera into thine hand’ (Judges 4:13).

Her assault caught Sisera’s troops in the flanks or rear, or possibly both. At that point the Ephraimite force joined the main battle. ‘And the Lord discomfited Sisera, and all his chariots, and all his host, with the edge of the sword before Barak’ (Judges 4:15). 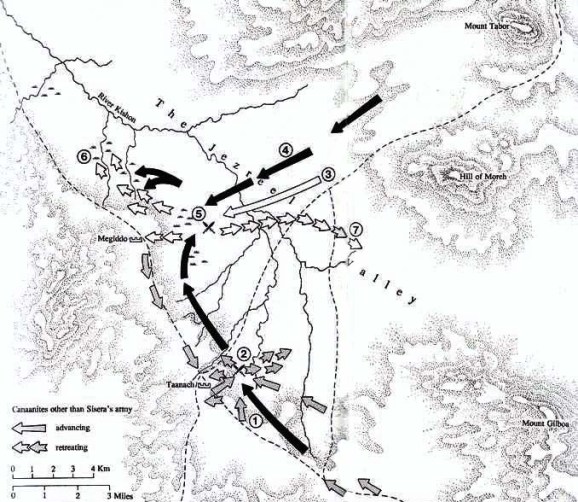 Phase 3; see key below
1 – the second Israelite force moves to divert Sisera from Mount Tabor; 2 – the diversionary force is unsuccessfully intercepted by local Canaanite people near Taanach; 3 – Sisera moves to help the Canaanite force and stem the Israelite advance; 4 – Deborah and Barak follow Sisera;
5 – Deborah and Barak overcome Sisera by the River Kishon; 6 – Sisera’s army flees; 7 – Sisera escapes on foot and is killed by Jael

A sudden downpour aided the Israelites considerably and helped turn Sisera’s defeat into a rout.  The Song of Deborah tells how the Kishon River swelled into a torrent and swept away the enemy’s horses and chariots. 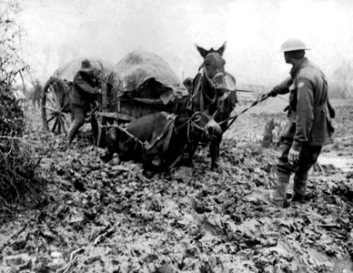 Even the heavily armed infantry became bogged down and hampered in their movements. The World War I image at right shows just how helpless the horses and chariots would have been in the mud. The Israelite warriors fell upon them and wiped them out.
Even the chariot of the commander, Sisera, was unable to move. He panicked. Instead of trying to save as much as possible from the debacle and fight another day, he jumped off his chariot and fled by foot to his ignominious death at the hands of Jael, wife of Heber the Kenite, in whose tent he sought refuge.

‘So God subdued on that day Jabin the King of Canaan before the Children of Israel’ (Judges 4:23)

Thus terrain and weather were used cleverly to bring victory to the Israel Tribes.

Battles of the Bible, Chaim Herzog and Mordechai Gichon, Greenhill Books, London. Maps and keys to the maps are from this excellent book.
The Art of Warfare in Biblical Lands, Vols 1 and 2, Yigael Yadin, McGraw Hill Book Company, New York.
Never Say Die! A short version of Deborah’s story

One on one fights in the Bible

The bow and arrow in war

Frightening the enemy – psychological war in the Bible