Bible Wars: Duels to the Death

Picture the scene in I Samuel 17. The Philistine and Israelite armies are standing on opposite hills. Goliath, the Philistine champion, shouts across the stream to the Israelite army, daring them to send their best warrior to fight him:

‘Why are you come out to set your battle in array? Am not I a Philistine, and you servants to Saul? Choose a man for you, and let him come down to me.’

Goliath, a well-armed giant, has no doubt he will win. 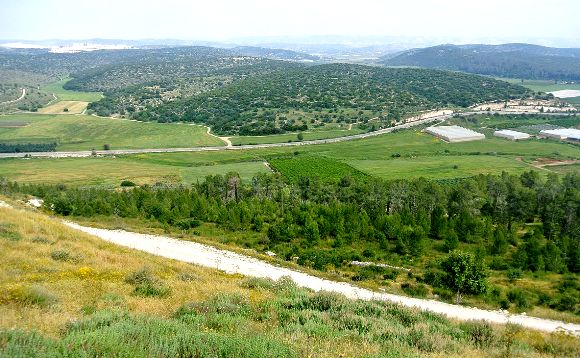 The beautiful Valley of Elah, where yount David looked down
at the enemy forces, and in particular at the giant Goliath

Were there rules for the duel?

At first sight his jeers look like bravado, but Goliath was actually following an ancient ritual. Two soldiers would fight. One would win, one would die, and the winner would take all. ‘If he is able to fight with me, and kill me, then we will be your servants: but if I prevail against him, and kill him, then you shall serve us.’

For this duel to take place, both sides had to accept that their fate would be decided by the outcome of the contest. So when David killed Goliath, the Bible says: ‘And when the Philistines saw their champion was dead, they fled.’

It should have ended there with the death of Goliath, but the Bible records that the tribes of Israel did not always follow the rules – this was one of their strengths.

They gave chase, and inflicted heavy casualties on the Philistines.

The story of David and Goliath is presented in detail. But there are other duels in the Bible. Read II Samuel 21: 18-19: 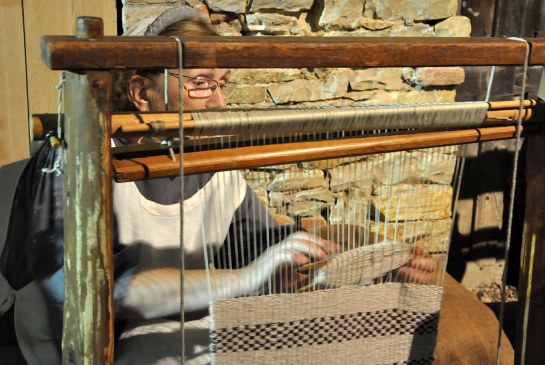 The beam of a weaving loom

‘And he killed an Egyptian, a man of great stature, five cubits high; and in the Egyptian’s hand was a spear like a weaver’s beam; but Benaiah went against him with a staff, and plucked the spear out of the Egyptian’s hand, and slew him with his own spear.’

Perhaps the best duel story deals with the vicious clash between the House of David and the House of Saul. Men of valour from both royal households met to fight to the death. You can see a photograph of the Pool of Gibeon below: this is where the struggle actually took place.

The ancient pool at Gibeon where the fight took place: imagine the two groups of men sitting on opposite sides of the pool

‘And Abner the son of Ner, and the servants of Ish-bosheth the son of Saul, went out from Mahanaim to Gibeon. And Joab the son of Zeruiah, and the servants of David, went out, and met together by the pool of Gibeon: and they sat down, the one on the one side of the pool, and the other on the other side of the pool. And Abner said to Joab, ‘Let the young men now arise and have a contest before us.’ And Joab said, ‘Let them come forward.’

So they came forward and were counted as they passed by, twelve for Benjamin and Ishbaal son of Saul, and twelve of the servants of David.

And they caught every one his fellow by the head, and thrust his sword in his fellow’s side; so they fell down together: wherefore that place was called Helkath-hazzurim, which is in Gibeon.

The battle was very fierce that day; and Abner and the men of Israel were beaten by the servants of David.’

What actually happened in this fight?

The term ‘young men’ is the literal translation of the Hebrew Ne`arim. But in its military context, Ne`arim means picked troops, like the crack unit of Canaanite mercenaries serving in the army of Rameses II at the Battle of Kadesh, who were called Ne`arun.

Facing each other across Gibeon’s pool, therefore, were not a group of high-spirited youngsters but the most highly skilled professional soldiers of both sides. And the ‘game’ they played was no game but a group of serious duels in the full technical sense of the term.

Grasping the head of one’s adversary with one hand and stabbing his side by a short sword with the other was an accepted tactic, as we see in the relief on the orthostat from Tell Halaf below. 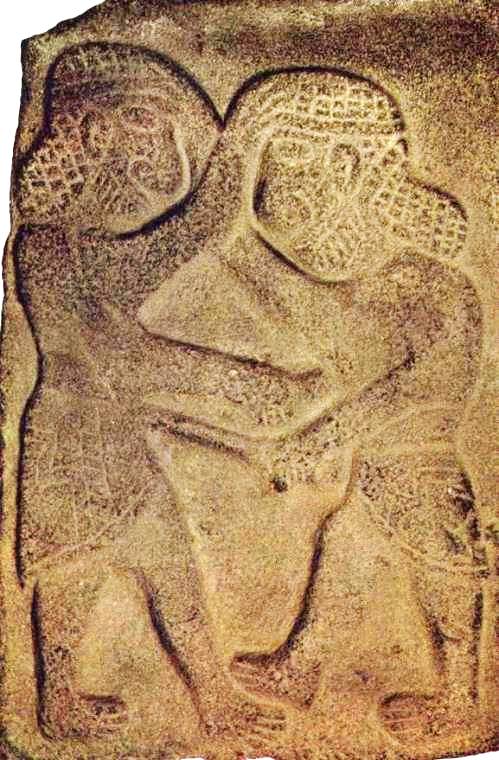 A wall relief from the ancient Hittite city of Tel Halaf. It shows two warriors struggling to stab each other. Their long hair is secured in hair-nets and they wear decorated loin-cloths, which suggests they were high status. One appears to be stabbing the other in the heart.

So what’s the truth of this story?

What almost certainly happened was that the two armies met at Gibeon, and one commander, Abner, suggested to his rival commander, Joab, to hold dueling contests between the picked men of both sides instead of pitting their entire force against each other.

There was a negotiation between the two leaders. Abner made the request. But only after Joab had agreed did the duels begin.

The result was indecisive, for the contestants ‘fell down together.’

What if there was no clear winner?

And this explains the next part of the story – ‘The battle was very fierce that day.’ The duels had been fought, neither side had won conclusively, and so there was no alternative but to send both armies into battle.

There is a striking similarity between

The parallel is close, right down to the prior negotiation, the combat, and the result.

The dual was an effort to secure a military decision without the heavy bloodshed of a full-scale battle.

Jael – a duel, or straight out murder?

Psychological war in the Bible