Shields in the ancient world

Someone is trying to hit you. What do you do? You throw up your arm to ward off the blow. Your arm is a primitive shield. And of course people were quick to see the advantage of having a shield that was stronger than their bare arm.

What were the first shields like? We know that many primitive tribes used pieces of bark prized off the sides of trees – anything that made a barrier between the body of a fighter and the weapon of his enemy.

The idea must have caught on quickly, with fighters using the materials they had at hand. Metal of course was not used until smelting was discovered. But in the meantime, wood, reeds, bark and stretched animal skins were used.

What was the ideal shield?

Unfortunately, there was never an ideal shield, at least in ancient times.

Ancient armorers sought a way to solve this problem, experimenting with different shapes, or different materials, or both. Their efforts are reflected in the numerous shapes of shields which have been found:

Each provides its own clue to the reasoning behind its design. 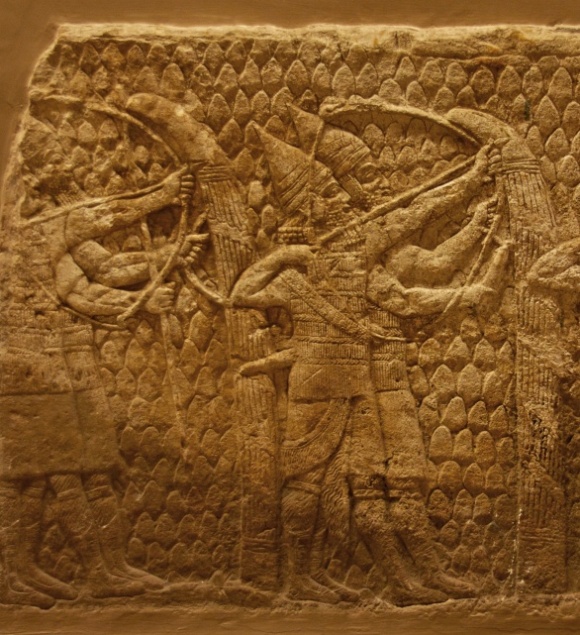 Assyrian shield bearers protect heavy-armed archers firing at the walls of a besieged city.  These archers are each accompanied by a soldier whose duty it is to hold the tall shield in position and guard against enemies who come too close. Note that the ‘shield’ is made of reeds or canes bound tightly together to form a sort of wall behind which the archer stood. Assyrian, about 700-692 BC, from Nineveh, South-West Palace.

Ancient designers were as concerned with the choice of material as they were with shape in the search for the ideal shield. The ideal material was both light and tough, and also easily available – hence the reeds shown in the image above.

Most early shields were of wood, leather, plaited twigs or reeds, or of metal.

The metal shields were very heavy, but they gave better protection.

Some shields, as a compromise between strength and lightness, were made of wood or leather and stiffened with metal plates and studs. 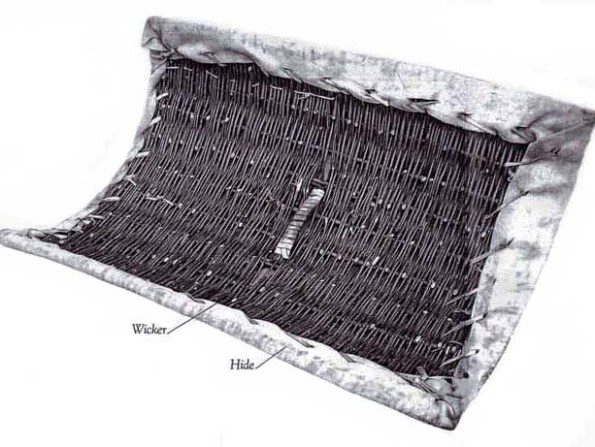 Shield with backing and hand-grip of wicker, with leather outer covering.

Convex shields were often lined with a wicker backing

The size and shape of shields varied, according to need. Usually, a soldier wearing heavy body armor did not need or want a large heavy shield as well. It was cumbersome and made him less mobile.

He was better off with a small, maneuverable shield.

Two centuries after Lachish, Greek soldiers were carrying only small shields about 3ft. (90cm) in diameter; but their body was covered by helmet, breastplate and leg greaves, and they fought in close formation. A large shield would have been unnecessary and cumbersome.

Judging by the wall reliefs at Nimrud, Sennacherib’s troops at Lachish used shields to protect the archers. These shields were made of leather stretched over wicker frames (see example above).

Ancient shields varied in size and shape according to need.

The highly mobile troops who scaled the walls of the biblical city of Lachish had small, light shields, as did the defenders of the city  (see detail of wall relief, below); the archers shooting from below the walls, easy targets for the city’s defenders, were shielded by mobile wicker walls. 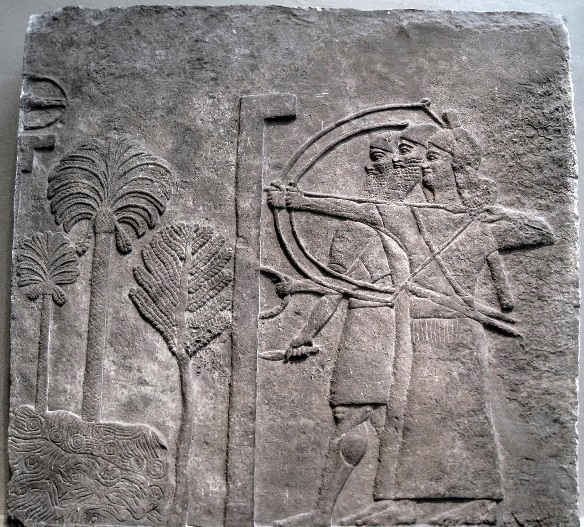 The defenders of the city (see upper left-hand corner) had small light bows used for sniper fire. The archers shooting from below the walls, easy targets for the city’s defenders, were shielded by mobile wicker walls. Note the rounded shield-grip similar to the later Greek shield illustrated below.

A large wicker construction like this, almost like a mobile wall, needed one man just to hold and move it. It is called a ‘pavis‘, and would shield two or more people.

This meant that every archer below the walls at Lachish worked in tandem with his shield bearer. The shields were taller than the soldiers and curved at the top so that they caught arrows falling onto the heads of the soldiers. 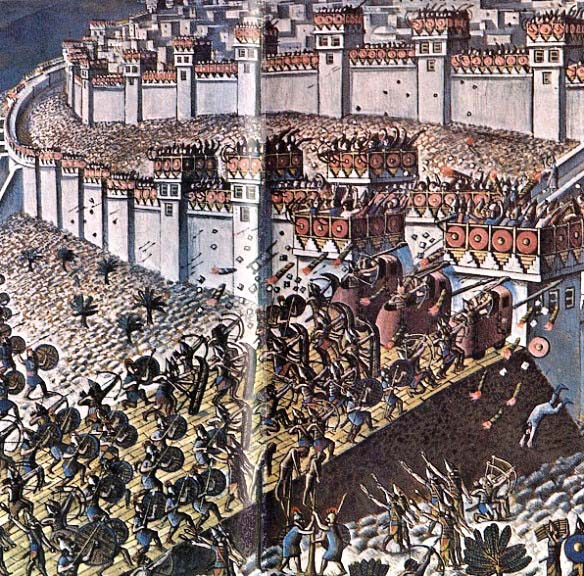 Reconstruction of the attack on Lachish; note the variety of shields being used

These wicker backed shields were so much a part of the Assyrians weaponry that surviving records show that special reed farms were set aside to provide resources in time of war – which for the Assyrians was more or less a permanent state.

Statuette of a warrior wearing helmet and cuirass

The first Greek mercenaries appeared in Palestine at the beginning of the 5th century BC.

From that time until the arrival of the Romans, Palestine was the scene of a series of wars fought by Greek troops, armed according to the classical Greek pattern, shown in this statuette of a warrior wearing helmet and cuirass (right).

The basic unit was the heavily armed infantry, the hoplytes, named after their heavy bronze shield. This was shaped like a convex rectangle and was carried by a ring in the inside centre, held in the left hand (see image below).

The shield covered almost the whole of the soldier’s body, although he also wore a breastplate, closed high-crested metal helmet and metal greaves on his legs to protect his feet.

ln his right hand he wielded the heavy iron-headed pike almost three metres long, which was his main weapon although he also carried a short iron sword.

The hoplytes’ battle formation was a phalanx arranged so that while the soldier’s left side was covered by his own shield, his right hand was protected by his comrade’s.

The strength of the phalanx depended on the courage of the front-row soldiers, who had to meet the enemy face to face, supported (and pushed) by the soldiers of the rows behind them. 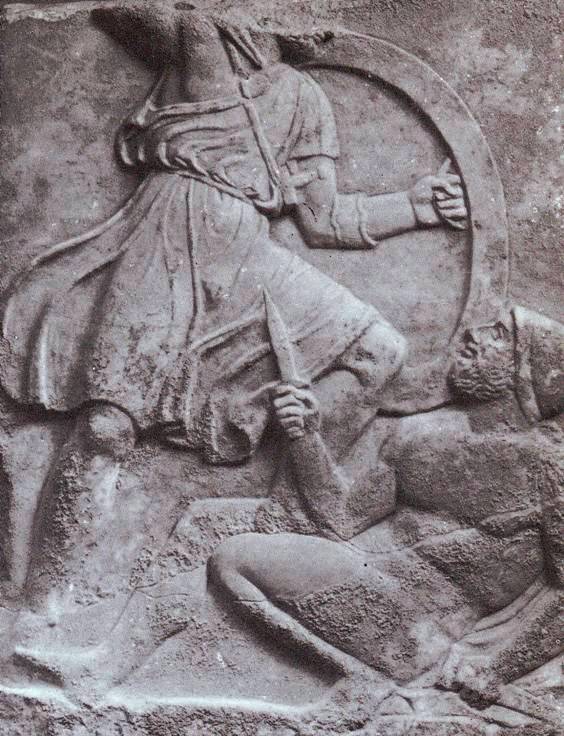 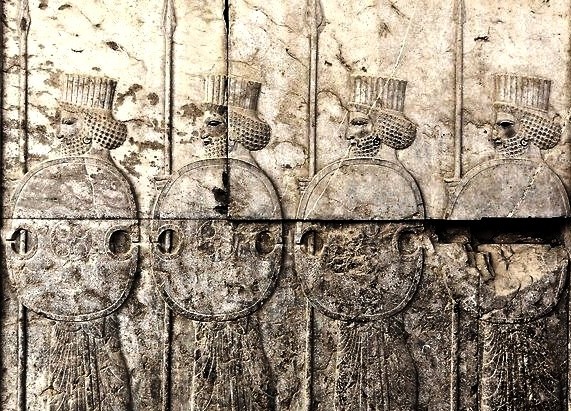 Persian soldiers with ‘figure-of-eight’ shields, from the walls of Persepolis

What was
the Trojan Horse?

Terrorism in the Bible

War in the ancient world