What were the different types of sword?

In the earliest times there were two types: 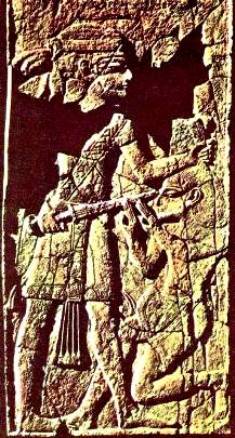 Both had a handle or hilt, and a metal blade. Both were designed for killing the enemy.

What made a perfect sword? 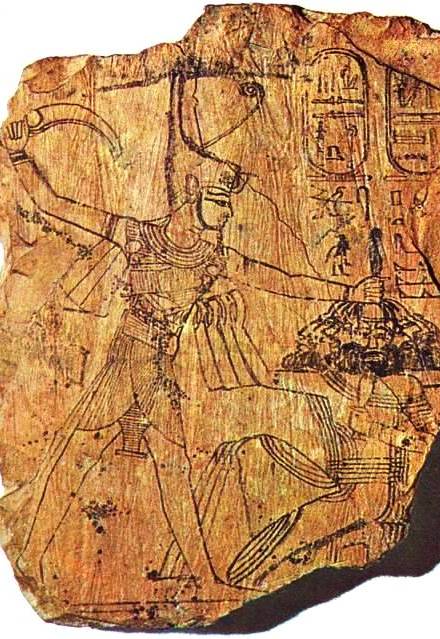 The perfect sword did not just appear by magic. It took thousands of years to develop.

But two things were paramount:

Sometimes the hilt was long and the blade short; at other times armies and weapon-makers preferred the short hilt and long blade.

When was the sword invented?

You’d think that soldiers had always had swords, but this was not so. The sword was a late-comer to ancient warfare.

Why? Because it needed a long metal blade, and until armorers learned to produce hard metal, an effective sword could not be made.

It was much easier to make a mace or an axe. These weapons had a comparatively small head or blade and so were easier to make, and they held sway for thousands of years.

When they finally did appear, swords were usually

Since they were not made of hard metal, there was the constant fear that they would break or be blunted by a heavy blow.

This problem was partly solved by making the centre of the blade thicker (see images below). 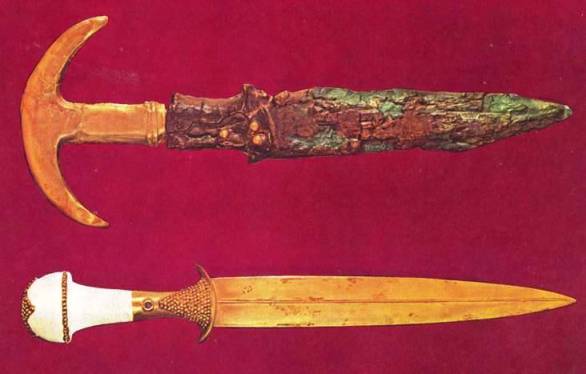 In the second half of the third millennium, sickle swords appeared. These were curved swords used for striking. See the examples below. 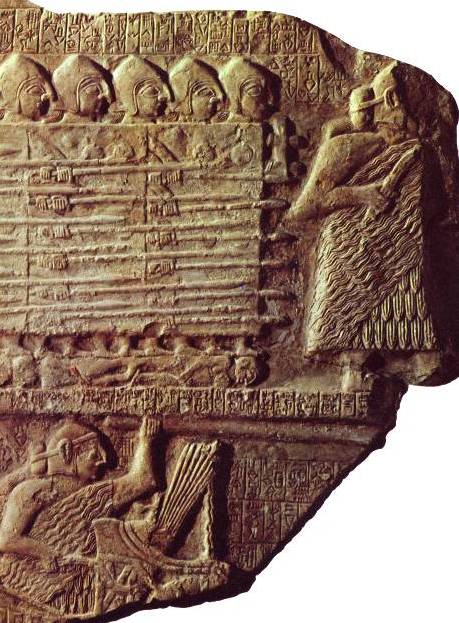 Eannatum, King of Lagash (lower area of picture) leads charging troops; he holds a long spear in his left hand and a sickle sword in his right 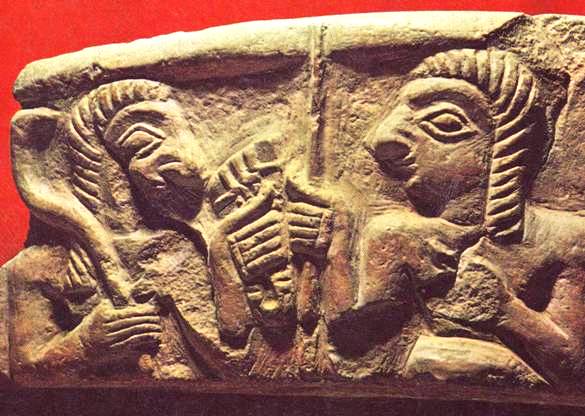 The Stele of Vultures. See the object held in the right hand of the warrior
at the left of this stone relief from Telloh

Conch plaque from the temple of Ishtar at Mari. Note the sickle sword held in the warrior’s left hand

The sickle sword was different from earlier weapons because both hilt and blade were from the same bar of metal. It was a striking, as distinct from a thrusting, weapon. It was particularly suited to charioteers who could wield it at the height of a charge. See examples below.

The distinctive feature of all these swords during the first half of the second millennium is the shortness of the blade in relation to its hilt. The hilt was roughly twice the length of the blade, giving the weapon an axe-like quality.

Only in the second half of this millennium did this change: the blade became as long as its hilt, and at times even longer.

It was during this period that this weapon can be said to have become a proper sword.

Things changed when helmets and armor came into general use. The blade of a sword became longer than the hilt.

How do we know? You can see this in the 13th century rock carving from Yazilikaya near Boghazkoy in Anatolia (see below). It shows warrior-gods marching in columns bearing the curved sword with the long blade on their shoulder. This must have been how the sword was carried on the march. 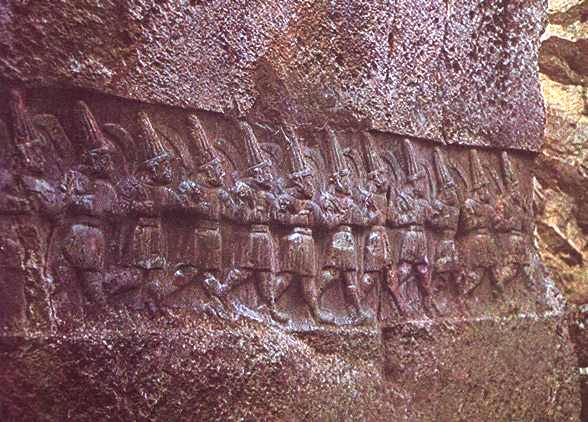 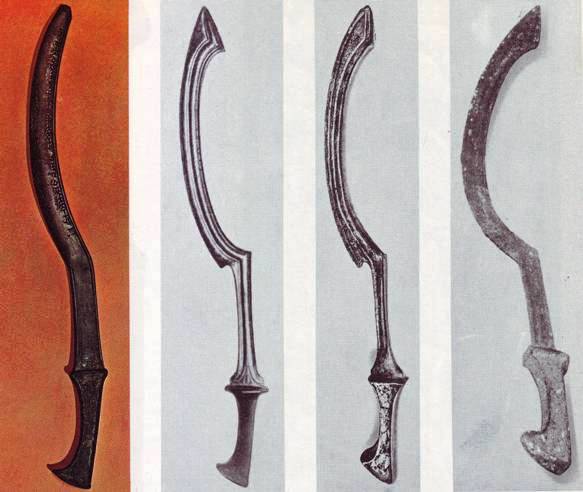 The detailed form and shape of four sickle swords.

Where were these swords used, and who owned them?

The first type of sword like this was found at Gezer in Palestine in the tomb of a nobleman, belonging to the first half of the 14th century BC.

The sickle sword at far right in the image above bears the name of the Assyrian king, Adad-Nirari (1307-1275BC).

In the period of the New Kingdom this type of sword became popular in Egypt. The Egyptians called this sword khopesh after their word for the foreleg of an animal, which it resembled.

In their swords, the blade was longer than the hilt and quite wide.

Not only was the khopesh sword in common use with the Egyptian army of this period, as is shown by such monuments as the relief at the temple of Karnak (below) but it became the symbol of the Pharaoh’s authority.

The relief below shows Rameses III smiting his Canaanite enemies with a sword. In images from earlier periods, the Pharaoh would have been wielding a mace. 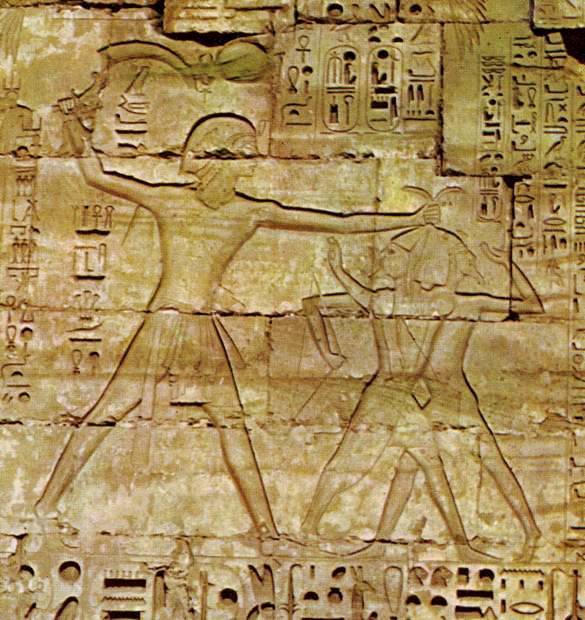 This is the type of sword Joshua must have used when when he invaded Canaan: ‘he smote with the edge of the sword’.

The straight sword was also undergoing change. While previously it had been a kind of dagger with a narrow blade (see above), it now became the long straight blade made popular by the Sea Peoples. Many of them served in the Egyptian army in the 19th dynasty where they were armed with long swords.

A sword of this type belonging to the end of the 13th century BC, bearing the name of Pharaoh Merneptah, was discovered at Ugarit (see above). Its blade was 60 centimeters, and its hilt added another 14 centimeters to the length of the sword.

Over the centuries, the sword had changed from a short stabbing weapon to a much deadlier one, long, elegant and horribly efficient.

Athaliah was hunted down and murdered