Berenice: much married, much loved 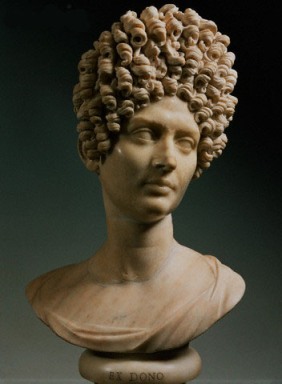 Berenice was a law unto herself. She certainly made the most of her royal status.

As a young woman she married into one of the great intellectual families of the time. Her husband was Marcus, nephew of the philosopher Philo. She was about thirteen years old at the time. 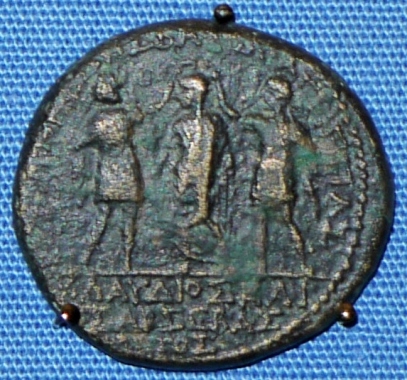 Berenice’s husband Herod of Chalcis (left) and her brother/lover Agrippa (right); the two men are placing a crown on the head of the central figure, the Roman Emperor Claudius

Almost immediately widowed, she then married her uncle Herod, King of Chalcis.

This meant she now had the title of Queen.

She was about sixteen.

Again, still only aged about 22, she was widowed.

Again she recovered rapidly from her grief and married yet another king – this time Polemo of Cilicia.

Incestuous affair with her brother Agrippa 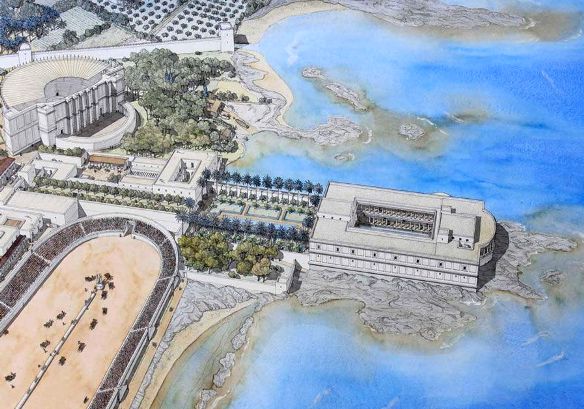 Reconstruction of the palace at Caesarea as it was at the time Berenice visited it. Paul pleaded his case, as described in Acts 26, in the main hall to the left of the apex of the stadium

The third marriage was not a success, and she left Polemo (or perhaps divorced him) so that she could spend more time with her brother Agrippa.

Their relationship was an open scandal, and in fact Agrippa never took a wife.

We get a glimpse of this in Acts of the Apostles 25. Notice how Berenice is mentioned on equal terms with her brother King Agrippa, when Paul defends himself in the splendour of the royal court at Caesarea:

13 A few days later King Agrippa and Bernice arrived at Caesarea to pay their respects to Festus. 14 Since they were spending many days there, Festus discussed Paul’s case with the king. He said: “There is a man here whom Felix left as a prisoner. 15 When I went to Jerusalem, the chief priests and the elders of the Jews brought charges against him and asked that he be condemned. 22 Then Agrippa said to Festus, “I would like to hear this man myself.” He replied, “Tomorrow you will hear him.”

23 The next day Agrippa and Bernice came with great pomp and entered the audience room with the high-ranking military officers and the prominent men of the city. At the command of Festus, Paul was brought in. 24 Festus said: “King Agrippa, and all who are present with us, you see this man! The whole Jewish community has petitioned me about him in Jerusalem and here in Caesarea, shouting that he ought not to live any longer. 25 I found he had done nothing deserving of death, but because he made his appeal to the Emperor I decided to send him to Rome. 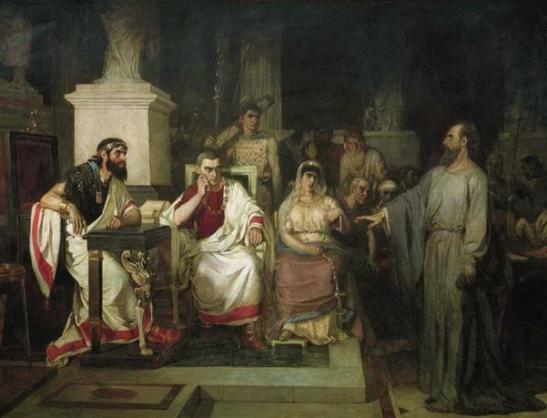 St Paul in the presence of Agrippa, his sister Berenice
and the Roman pro-consul Festus

Affair with the Roman Emperor Titus 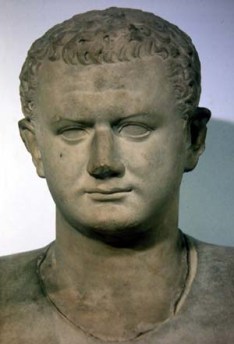 The Roman emperor Titus
as a young man

It was at this time that she met the Roman general Titus, son of the emperor Vespasian, and though she was eleven years older than he, she began an intense love affair with him.

After the Jewish Revolt (66-70AD) she went to Rome with him. The Roman populace became intensely anxious that she and Titus would marry and that she would become a second Cleopatra – she was eleven years older than he, and had a strong personality. She was forced to leave Rome.

When Titus became Emperor, Bernice returned to Rome, possibly hoping that Titus would marry her (will somebody please make a movie of this woman’s life?).

It was not to be. It was made clear to Titus that he could have the Empire or Bernice, but not both, and he (sensibly?) chose power rather than love.

Maybe he would have sent for her when he had a firm grip on power, but he died two years after becoming Emperor.

So no-one knows whether Berenice would eventually have become Empress, or not.

Who was King Herod?

Cosmetics
in the ancient world