Jesus & a woman with an issue of blood

Jesus cures a woman who believes

What was the woman’s story?

Where did this miracle happen? The story occurred in Capernaum, where Jesus was living at the time. Capernaum (the village of Nahum) was on the northern shore of the Sea of Galilee, on a main highway (see Maps of Bible lands at the time of Jesus).

It was probably only a small settlement at the time, with several rows of houses along the shoreline of the Sea of Galilee. The apostle Peter had a house there. 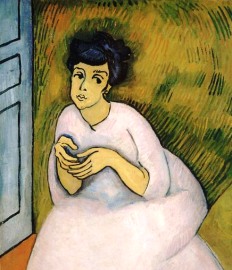 During her menstrual period, a Jewish woman was relieved of many of her normal duties. It was a quiet time, a time for herself. Milestones in Women’s Lives

The town was well situated as a headquarters for someone like Jesus. It was on a main highway, and had access to the water for travel by boat. It probably also had a tax or toll office, and a small garrison of soldiers.

What was happening? In the story, Jesus was making his way towards the house of one of the leaders of the local synagogue. He was surrounded by a large crowd of people, among whom was a woman who had been suffering with a prolonged menstrual flow.

She had endured this for twelve years.

Strictly speaking, she should not have been among other people. According to the laws of ritual purity, she should have been at home during her menstrual period, living quietly (see Leviticus 15:19-31).

During her menstrual period, a Jewish woman was relieved of many of her normal duties.

The days of her menstrual period were regarded as a quiet time, a time for herself. Milestones in Women’s Lives

What were the purity laws?

These laws worked very well for healthy women who had a menstrual period of five – seven days. It was a time out for them, when they were relieved of their normal duties and could rest.

But the woman in this story was not healthy. Her menstrual flow had lasted twelve years, so the purity laws had become an impossible burden for her.

It is not surprising that she had used up all her money on doctors, or that she was prepared to flout the Law when she heard that a wonder-worker called Jesus was in the street outside her house. She was desperate. 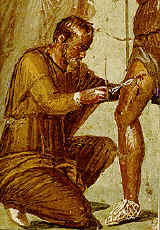 Wall painting from Pompeii, with a doctor treating a patient

Doctors in 1st century Palestine used a wide range of herbal cures to help their patients. Many of these were effective, and gave relief to the sufferer.

Surgery was only ever used as a last resort, because the patient often died of shock during the operation, which was performed without anesthetic.

The woman hoped Jesus could do what the doctors could not.

She pushed her way through the crowd, until she was close to Jesus. Then she reached out and touched the fringe on his shawl.

If you read the Bible text for this story, you will notice that Matthew mentions several times that Jesus’ clothing had the fringe which was part of the required clothing for a devout Jew (see Numbers 15:37-40). He was showing that Jesus was someone who respected the Law, and should not have been executed as a criminal.

The woman touches Jesus and is cured

What happened when the woman touched Jesus’ garment? She felt an immediate transformation within her body, and knew that she was cured.

At the same moment, Jesus felt power go out from himself. He looked around, and asked who had touched him.

Peter pointed out to him that he was so closely surrounded by people that he was constantly being touched by them, but that was not what Jesus meant. He looked around at the people near him.

The woman was terrified, because she had broken the purity laws and, in touching Jesus, had made him ritually unclean as well – no small thing for a respected rabbi like Jesus.

Any person she had touched in the crowd was also ritually unclean. Each of them would have to go through a process of ritual cleansing which involved bathing, changing their clothes and being alone until the evening.

What does the woman do? 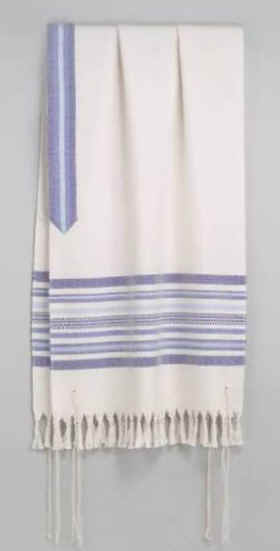 A hand-woven tallit, or Jewish prayer shawl with fringe

Even though she was shaking with terror, she came forward and told Jesus the truth. He was gentle with her, calling her ‘daughter’.

He told her that it was her own faith that had cured her, and he blessed her.

Jesus’ statement about the woman’s faith was meant to emphasize to the people of the time that the cure was not done by magic or sorcery, which were common in the ancient world.

This might seem obvious to us, but it was not so obvious to people in 1st century Palestine. Many people at that time believed that magicians could do astounding things, and some of them might have believed that Jesus’ shawl had some magic power that cured the woman.

Jesus emphasized that it was her own faith that effected the cure.

Main themes in the woman’s story 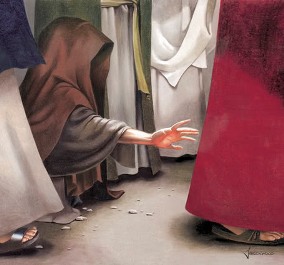 The woman, with her face hidden, reaches out to touch the hem of Jesus’ garment

Imagine that you are present at the event described, one of the people in the crowd. Describe 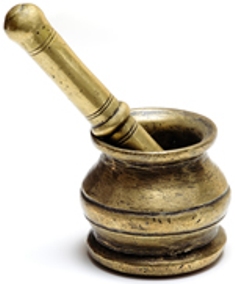 Mortar and pestle; these implements were used in ancient medicine

Present these descriptions and responses in the form of a journal entry, or assume the persona of the man/woman, and tell the group or a learning partner about your experience.

Find out about the medical practices and beliefs that were prevalent in 1st century Palestine. These would have been similar to those found in Rome, Greece and Egypt at the time. What were seen as the causes of disease and illness? What were some of the treatments prescribed by doctors?

Extra ideas at Activities for Bible Study Groups and Schools

Rules for a woman who was menstruating
WOMEN IN THE BIBLE: MAJOR EVENTS

Read about fascinating women of the Bible

The woman’s story
in the gospels

Menstruation
in the Bible

Maps of Israel at the time of Jesus