The Queen of Sheba, Bible woman

Queen of Sheba: some background

Who was the Queen of Sheba? 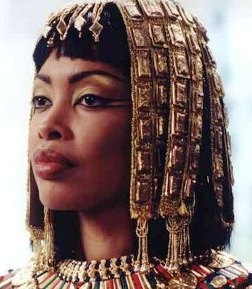 This legendary woman came flaunting herself (and her wealth) at King Solomon’s court.

Who was she? Most probably she was from Ethiopia, a queen in her own right – a royal woman used to getting her own way and confidently sure of her worth.

Of course she was not the only queen in the ancient world. Egypt and Assyria had women who ruled.

But in Sheba, women played an important role in society and were equal to men in nearly all spheres, with civil, religious and military rights and duties much like a man’s. Polygamy was rare in Sheba.

Were the Queen and King Solomon lovers?

At one point in the story, the Sheban Queen says to Solomon ‘happy are your wives’. What does she mean? It’s ambiguous to say the least, and according to ancient tradition, the queen took a child back to Sheba – hers and Solomon’s.

The emperor of Ethiopia traced his direct lineage from this baby. Needless to say, the Bible does not mention it.

Whatever the truth, Solomon had such a reputation for enjoying the company of women that people have speculated that there was more to their relationship than just diplomacy.

He had, after all, a large number of foreign wives and concubines – the Bible mentions one thousand, though they were not ‘wives’ in the sense that we use the word. 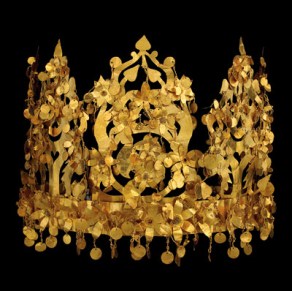 There would have been

What happened while the Queen of Sheba was at Solomon’s court? An affair between two equals? The traditional Bible translation says that after seeing all Solomon had to offer, ‘there was no more spirit in her’.

An alternative translation is that ‘he took her breath away’. Solomon may have met his match, and so may she.

Why did she go to Solomon’s court?

Visit of the Queen of Sheba to King Solomon, by Edward Poynter, 1890. See page end for full image

She was a ruling queen, and there was a good political reason for her journey. She visited Solomon because of

Saba (or Sheba) was one of the most important southern Arabian kingdoms. It played a major role in the trade of the area, especially in spices and incense for which south-western Arabia was famous.

The camel had been recently introduced into that part of the world. This meant a big increase in trade for Sheba –  Sheba began at about the time of the Queen’s visit a commercial expansion which in a few centuries brought them control of the whole trade of a wide area of southern and central Arabia.

It may well have been the Queen of Sheba who kick-started this expansion.

Why was Sheba (and its queen) so rich?

The land of Saba was rich in gold and precious stones, frankincense and sugar (called ‘sweet cane’ in Jeremiah 6:20).

The people were great traders, and apart from their connections with Solomon, the Bible records that 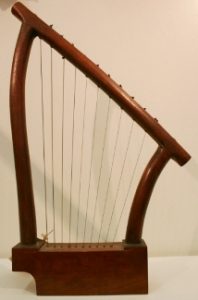 The excuse for her visit, of course, would be her desire to see the famous king. Part of her motive was curiosity about Solomon, who enjoyed a reputation for being a shrewd judge of character and a learned scholar as well. This is part of the truth. But she was certainly interested in the possibility of trade with Solomon’s thriving kingdom.

The visit seems to have included a diplomatic ceremony. Sumptuous gifts were exchanged – the Bible mentions gold, spices, precious stones and almug wood, which was probably sandlewood or pine. The Bible says this wood was made into supporting beams, (possibly for Solomon’s palace), lyres and harps – ancient musical instruments (remember that Solomon’s father David had been a gifted musician). 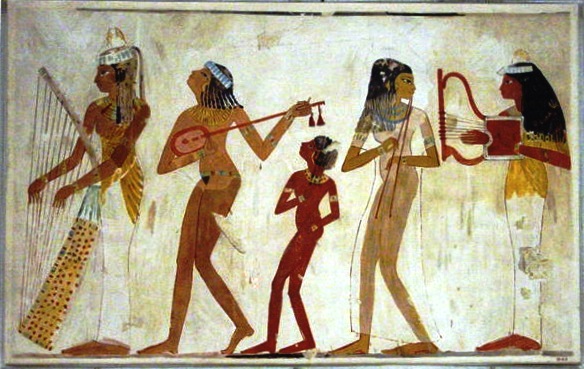 Egyptian musicians with lyres and harps, both mentioned in the Bible story

During the visit she is said to have asked Solomon ‘hard questions’. These were probably riddles or tests of practical sagacity, to see just how quick his mind was.

He apparently answered to her satisfaction.

She also tested his practical wisdom by setting him a series of ‘what-if’ dilemmas, to gauge his administrative skills. She was not only satisfied with his responses, but impressed.

Solomon was lavish in his hospitality. He was clearly trying to impress this exotic queen. 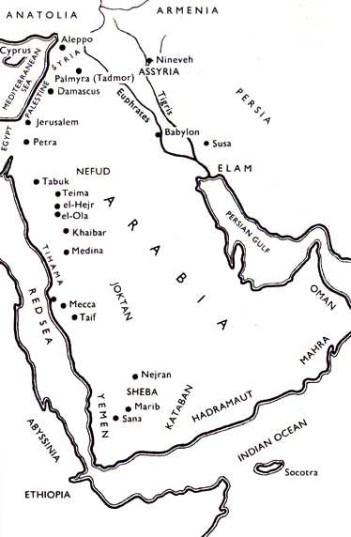 Map of Sheba and Israel

The exact location of Sheba is unknown, but scholars identify it with Saba, the home of the Sabeans, who occupied the southwestern part of the Arabian Peninsula and the territory of eastern Ethiopia.

It is not certain whether Sheba refers to the kingdom in the southern part of the Arabian Peninsula or to some of its outposts in the northern part of Arabia. The Sabaean kingdom ﬂourished from about 1,000-450 BC.

Note: Not much is known about the history of her people, but it seems that the people of Sheba were divided into two quite separate classes: plebians and nobles.

Only the nobles had any say in government. The people were ruled by a form of oligarchy from which a king or queen was chosen to reign in rotation.

A match for the Bible’s King Solomon 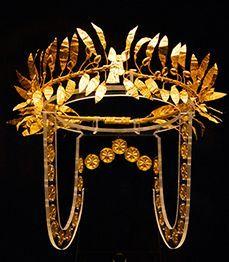 The Queen of Sheba’s story has just one episode:
She visited King Solomon, spoke to him on equal terms, and was impressed by his intellect and wealth.

Main theme of the Queen’s story

1 Now when the queen of Sheba heard of the fame of Solomon concerning the name of the LORD, she came to test him with hard questions.

2 She came to Jerusalem with a very great retinue, with camels bearing spices, and very much gold, and precious stones; and when she came to Solomon, she told him all that was on her mind.

3 And Solomon answered all her questions; there was nothing hidden from the king which he could not explain to her.

4 And when the queen of Sheba had seen all the wisdom of Solomon, the house that he had built, 5 the food of his table, the seating of his officials, and the attendance of his servants, their clothing, his cupbearers, and his burnt offerings which he offered at the house of the LORD, there was no more spirit in her.

8 Happy are your wives! Happy are these your servants, who continually stand before you and hear your wisdom! 9 Blessed be the LORD your God, who has delighted in you and set you on the throne of Israel! Because the LORD loved Israel for ever, he has made you king, that you may execute justice and righteousness.”

12 And the king made of the almug wood supports for the house of the LORD, and for the king’s house, lyres also and harps for the singers; no such almug wood has come or been seen, to this day.

13 And King Solomon gave to the queen of Sheba all that she desired, whatever she asked besides what was given her by the bounty of King Solomon.

So she turned and went back to her own land, with her servants.

Paintings of the Queen of Sheba

You will notice that most of the paintings of the Queen of Sheba feature a fair-haired woman, not a dark-haired woman as the Queen certainly was. This is because most of the artists were painting for northern European patrons, who saw fair or blond hair as a sign of beauty and nobility. Only in recent years have artists shown the Queen as she really was: dark-skinned and dark-haired. 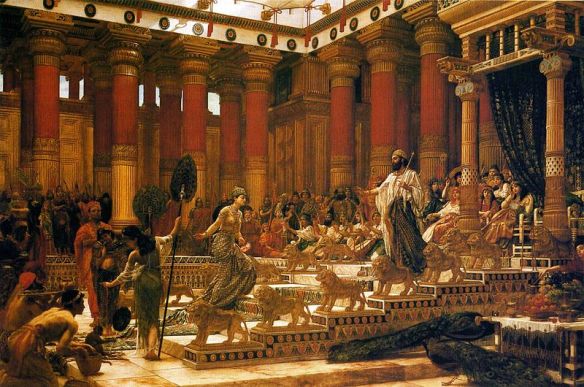 Visit of the Queen of Sheba to King Solomon

Edward Poynter, 1890 (see detail of this painting above left) 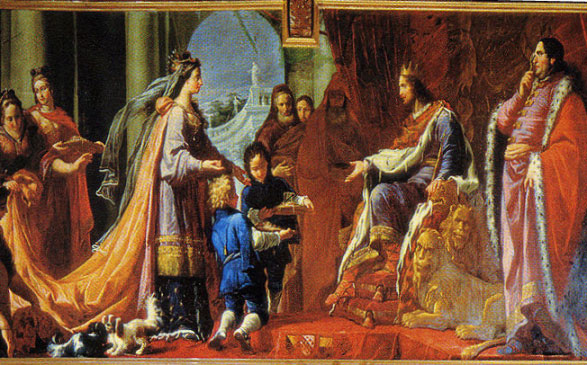 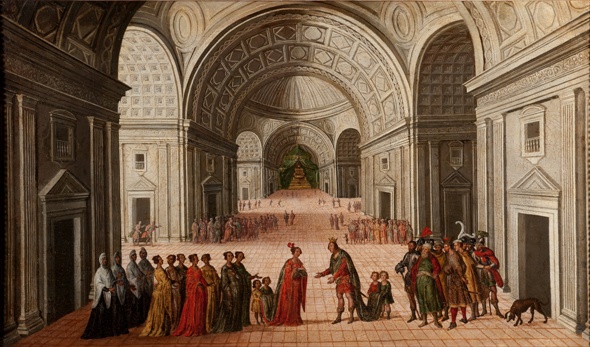 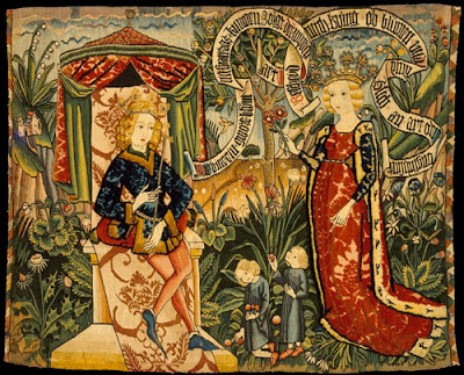 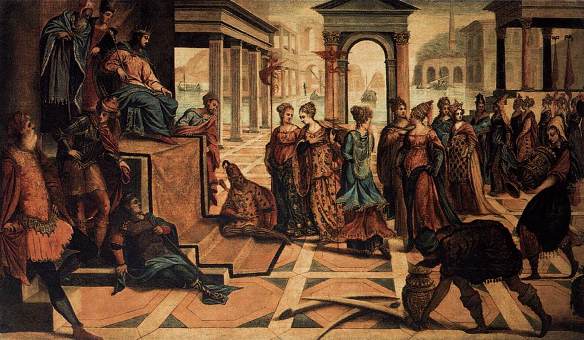 Solomon receives the visit of the Queen of Sheba
Tintoretto 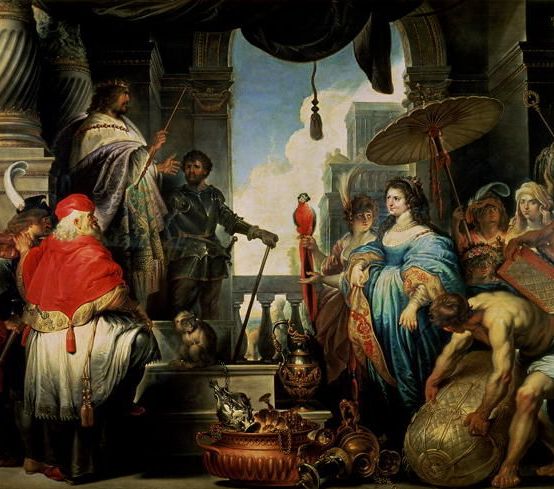 The Queen of Sheba and King Solomon Erasmus-Quellinus-II 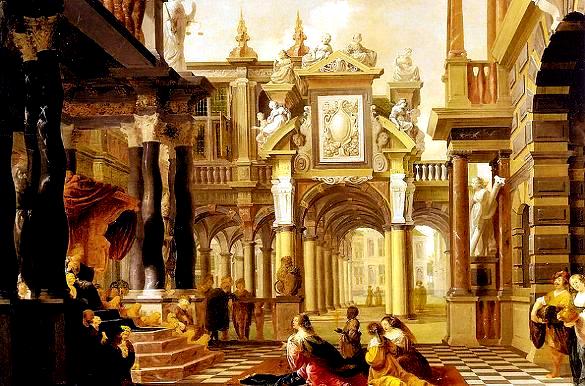 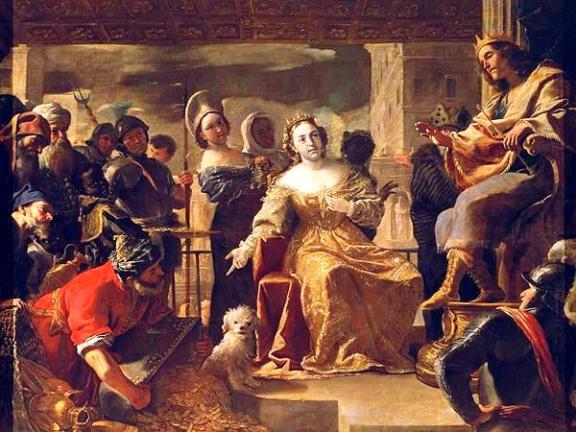 The Gifts of the Queen of Sheba, Mattia Preti

Famous Paintings of the Queen of Sheba