Who was Zipporah, wife of Moses? 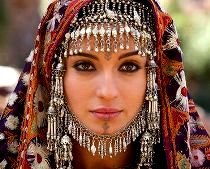 he story of Zipporah has 3 sections:

1 Zipporah meets Moses at the well

3 Was Zipporah the ‘Cushite woman’?

Zipporah meets Moses at the well

Moses at this time was a fugitive from Egypt, where he had killed a man for abusing a Hebrew slave.

Why did Moses kill this man? Because Moses had chosen to side with the oppressed (the Hebrew slaves) rather than the oppressors (the ruling Egyptians).

When he killed the Egyptian, he broke the ties that bound him to Egypt. Now he had to find his own path.

But what was that path? God might have a plan for him, but it was not immediately obvious. In the meantime, Moses had to find a refuge. 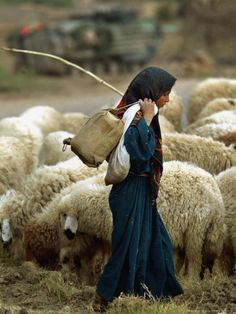 A woman takes her flock
to the well.

Zipporah at the well

He found one with the Midianites, a semi-nomadic people who were descended from Abraham (Genesis 25:1).

How did Moses meet them? At a well, where else!

Moses happened upon the seven daughters of Jethro, the Midian priest (priestly offices were undertaken by heads of tribes or families).

The young women were trying to water their flock, but were being tormented by the local blades, who would not let them get to the well to draw water. Chivalrous Moses stepped in and scared off the bullies. 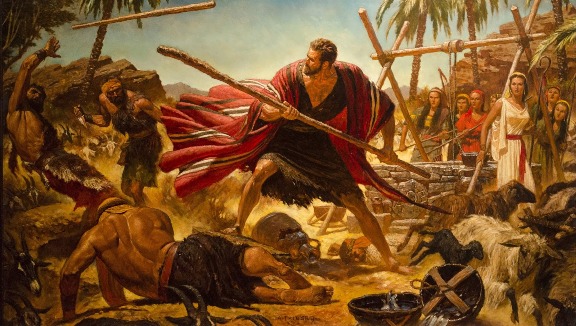 Painting: Moses sends the bullies packing!
Painting of a scene in ‘The Ten Commandments’

One thing led to another, of course, and Moses married Jethro’s daughter Zipporah. They had two sons, Gershom and Eliezer.

Once again Moses had acted in defence of the downtrodden. God was preparing him for his life’s work: rescuing the Hebrew slaves from Egypt. 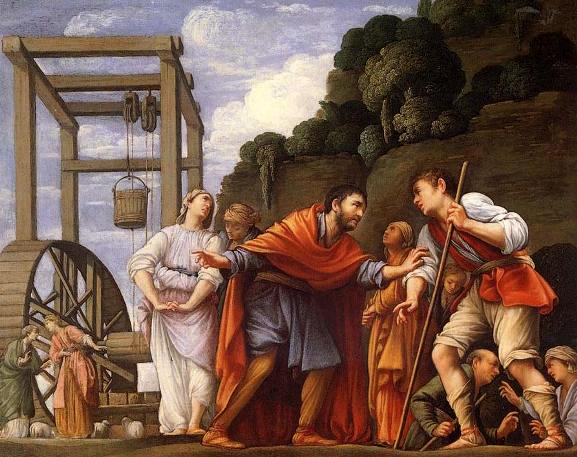 Moses defends Zipporah and her sisters
at a rather medieval-looking well, Saraceni

We don’t know how long Moses and Zipporah lived with Jethro’s tribe, but at some time God spoke to Moses, appearing to him in the form of a burning bush. God commanded Moses to confront Pharaoh and demand freedom for the Hebrew slaves.

Moses was prodded into action at last, and set out for Egypt.

God is angry with Moses

During this journey something strange happened. Moses knew he was special to God, but he had neglected to circumcise his son. The command to circumcise in Genesis 17:14 was seriously intended, and now God rose up to enforce this requirement.

Somewhere along the road, they stopped for the night and the Bible says that ‘God tried to kill Moses’.

Just what this means we do not know. Possibly Moses suffered an illness or seizure.

Zipporah, sensing that God was angry that their son wasn’t circumcised (see What was circumcision?) and that this omission had caused Moses’ illness, stepped in. 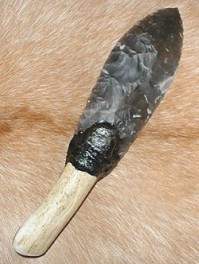 She took it upon herself to do what Moses should have done. She circumcised her son herself,

Then she said: “Surely, a bridegroom of blood thou art to me.”

Moses had become her bridgroom once again thanks to the blood of the circumcision.

The effect of this incident cannot be exaggerated. Deeply ingrained now in Moses’ heart was the belief that it is God’s anger, not Pharaoh’s, that he must fear.

Was Zipporah the ‘Cushite woman’?

Later on we read that Miriam and Aaron, sister and brother of Moses, object to his ‘Cushite (or Ethiopian) wife’.

Is this Zipporah? The straight answer is ‘probably not’.

The Cushite wife appears some years later in Moses’ story, during the wandering in the desert (you can read about the dispute between Miriam, Aaron and the Cushite wife at Miriam’s story.)

Zipporah may still be alive at this time, since it was common for high-status Hebrew men to have more than wife. 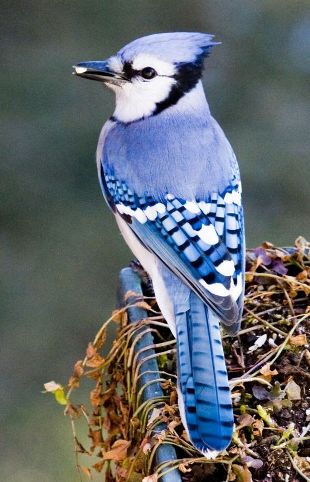 Zipporah means either ‘beauty’ or ‘bird’. She was the wife of Moses and mother of his sons
Moses, Hebrew-born and Egyptian-educated leader of the Hebrews in their flight from Egypt
Gershom, son of Moses, means ‘a traveller, or someone in a foreign place’
Eliezer, Moses’ son, means ‘my God is my help’

10 And the child grew, and she brought him to Pharaoh’s daughter, and he became her son; and she named him Moses, for she said, “Because I drew him out of the water.” 11 One day, when Moses had grown up, he went out to his people and looked on their burdens; and he saw an Egyptian beating a Hebrew, one of his people. 12 He looked this way and that, and seeing no one he killed the Egyptian and hid him in the sand. 13 When he went out the next day, behold, two Hebrews were struggling together; and he said to the man that did the wrong, “Why do you strike your fellow?” 14 He answered, “Who made you a prince and a judge over us? Do you mean to kill me as you killed the Egyptian?” Then Moses was afraid, and thought, “Surely the thing is known.” 15 When Pharaoh heard of it, he sought to kill Moses. 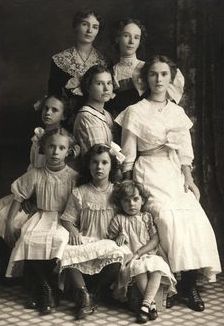 Seven sisters with their mother

But Moses fled from Pharaoh, and stayed in the land of Mid’ian; and he sat down by a well. 16 Now the priest of Mid’ian had seven daughters; and they came and drew water, and filled the troughs to water their father’s flock. 17 The shepherds came and drove them away; but Moses stood up and helped them, and watered their flock. 18 When they came to their father Reu’el, he said, “How is it that you have come so soon today?” 19 They said, “An Egyptian delivered us out of the hand of the shepherds, and even drew water for us and watered the flock.” 20 He said to his daughters, “And where is he? Why have you left the man? Call him, that he may eat bread.” 21 And Moses was content to dwell with the man, and he gave Moses his daughter Zippo’rah. 22 She bore a son, and he called his name Gershom; for he said, “I have been a sojourner in a foreign land.”

18 Moses went back to Jethro his father-in-law and said to him, “Let me go back, I pray, to my kinsmen in Egypt and see whether they are still alive.” And Jethro said to Moses, “Go in peace.” 19 And the LORD said to Moses in Mid’ian, “Go back to Egypt; for all the men who were seeking your life are dead.” 20 So Moses took his wife and his sons and set them on an ass, and went back to the land of Egypt; and in his hand Moses took the rod of God. 21 And the LORD said to Moses, “When you go back to Egypt, see that you do before Pharaoh all the miracles which I have put in your power; but I will harden his heart, so that he will not let the people go. 22 And you shall say to Pharaoh, ‘Thus says the LORD, Israel is my first-born son, 23 and I say to you, “Let my son go that he may serve me”; if you refuse to let him go, behold, I will slay your first-born son.'”

Jethro, the priest of Mid’ian, Moses’ father-in-law, heard of all that God had done for Moses and for Israel his people, how the LORD had brought Israel out of Egypt. 2 Now Jethro, Moses’ father-in-law, had taken Zippo’rah, Moses’ wife, after he had sent her away, 3 and her two sons, of whom the name of the one was Gershom (for he said, “I have been a sojourner in a foreign land”), 4 and the name of the other, Elie’zer (for he said, “The God of my father was my help, and delivered me from the sword of Pharaoh”). 5 And Jethro, Moses’ father-in-law, came with his sons and his wife to Moses in the wilderness where he was encamped at the mountain of God. 6 And when one told Moses, “Lo, your father-in-law Jethro is coming to you with your wife and her two sons with her,” 7 Moses went out to meet his father-in-law, and did obeisance and kissed him; and they asked each other of their welfare, and went into the tent. 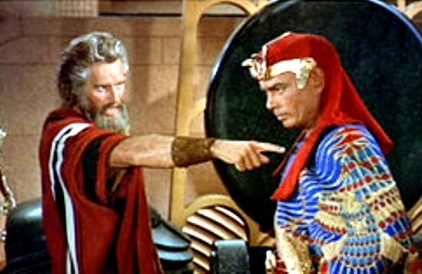 Moses speaks to Pharaoh, scene from the movie
‘The Ten Commandments’

10 And Jethro said, “Blessed be the LORD, who has delivered you out of the hand of the Egyptians and out of the hand of Pharaoh. 11 Now I know that the LORD is greater than all gods, because he delivered the people from under the hand of the Egyptians, when they dealt arrogantly with them.” 12 And Jethro, Moses’ father-in-law, offered a burnt offering and sacrifices to God; and Aaron came with all the elders of Israel to eat bread with Moses’ father-in-law before God. 13 On the morrow Moses sat to judge the people, and the people stood about Moses from morning till evening.

14 When Moses’ father-in-law saw all that he was doing for the people, he said, “What is this that you are doing for the people? Why do you sit alone, and all the people stand about you from morning till evening?” 15 And Moses said to his father-in-law, “Because the people come to me to inquire of God; 16 when they have a dispute, they come to me and I decide between a man and his neighbor, and I make them know the statutes of God and his decisions.”

17 Moses’ father-in-law said to him, “What you are doing is not good. 18 You and the people with you will wear yourselves out, for the thing is too heavy for you; you are not able to perform it alone. 19 Listen now to my voice; I will give you counsel, and God be with you! You shall represent the people before God, and bring their cases to God; 20 and you shall teach them the statutes and the decisions, and make them know the way in which they must walk and what they must do. 21 Moreover choose able men from all the people, such as fear God, men who are trustworthy and who hate a bribe; and place such men over the people as rulers of thousands, of hundreds, of fifties, and of tens.

22 And let them judge the people at all times; every great matter they shall bring to you, but any small matter they shall decide themselves; so it will be easier for you, and they will bear the burden with you. 23 If you do this, and God so commands you, then you will be able to endure, and all this people also will go to their place in peace.”

24 So Moses gave heed to the voice of his father-in-law and did all that he had said. 25 Moses chose able men out of all Israel, and made them heads over the people, rulers of thousands, of hundreds, of fifties, and of tens. 26 And they judged the people at all times; hard cases they brought to Moses, but any small matter they decided themselves. 27 Then Moses let his father-in-law depart, and he went his way to his own country.

of the Old and New Testaments

Bible Study Resource for Women in the Bible
Zipporah, wife of Moses, saved his life by hearing God’s voice

The Burning Bush
I AM WHO AM