The hard thing to grasp in 1 & 2 Maccabees is the almost suicidal courage of these people, ready to give up life for the cause they believed in.
If someone complains that the Bible is dull and boring, get them to read Maccabees….

In the centuries before the birth of Jesus, Israel lay squeezed between two great empires: 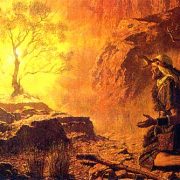 In about 198 BCE, the Seleucids gained control of Israel, and began a policy of Hellenisation – changing Jewish culture and religion so that Jewish people would become more Greek in their culture, thinking, dress and language, etc.

The Maccabean revolt was a struggle between

1 and 2 Maccabees tells the story of the heroic resistance of the Jewish people – how Mattahias and his five sons fought a guerilla war to liberate Judea and establish the Hasmonean royal dynasty.

Jews commemorate this great victory with the 8-day feast of Hanukkah.

‘The three generation of the Maccabee family are the focus of 1 Maccabees. 2 Maccabees stresses Judas’ role as the savior of the Jerusalem temple. 1 Maccabees, however, presents the Maccabean dynasty as bringing about Israel’s salvation and emphasizes its leaders’ military and political exploits as well as their religious stance.

Those in the community responsible for the Dead Sea Scrolls (found at Qumran) may well have been early supporters of the Maccabean movement but fell away when the Maccabees took control of the high priesthood and the temple worship.’